Takeaways: Caught in the Crossfire: Balancing EU Relations with the U.S. and China 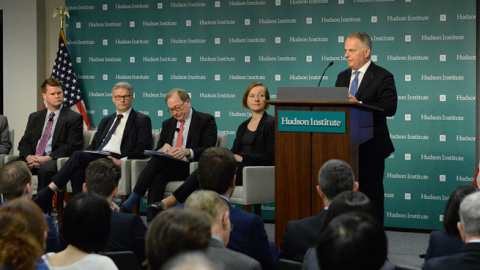 View the full video from the April 16th event titled, Caught in the Crossfire: Balancing EU relations with the U.S. and China

Key take-aways from the panel and discussion at Hudson Institute

* Transatlantic disagreements reflect the need to adjust transatlantic relations to the new priorities of the U.S. and its European partners.
* Security and economic issues are points of major agreement between the U.S. and EU; different perspectives on how to address these challenges provide areas of possible. collaboration.
* Main areas where the U.S. and Europe are ready to cooperate encompass information and intelligence sharing, sharing of best practices on how to engage China, technology and infrastructure defense mechanisms, and collaborative operational security approaches.
* The litmus test of strengthened transatlantic relations is likely to be U.S.-EU trade negotiations and whether they will conclude in a free trade agreement.

Transatlantic cooperation is necessary on China

Ashley Tellis, a senior fellow at the Carnegie Endowment for International Peace, noted that “the free and open Indo-Pacific is the most distinct of the Trump administration’s strategic initiatives. It consists of three elements: the freedom from political domination by any single power, the maintenance of an open economic system, and the need to protect our strategic coupling with Asia and Europe. China is one country that challenges these objectives. What are the possibilities of transatlantic collaboration to meet this challenge? The challenges we face in the Indo-Pacific and with respect to global order are fundamentally transatlantic projects and we have a common understanding of what constitutes good order. The fact that we have common values is no guarantee that we will not have disagreements.”

Thomas J. Duesterberg, a senior fellow at Hudson Institute, emphasized that “long-standing U.S. trade disputes with Europe on issues such as tariffs, trade surpluses and Europe’s decision-making and implementation speed calls into question the ability of the U.S. and Europe to work closely together. Greater flexibility is needed to conclude a free trade agreement.” However, according to Carnegie’s Tellis, “there is a huge difference between disagreements between friends and disagreements between adversaries.”

Europe acts beyond its borders

Since the end of the Second World War, the U.S. has benefited from collaborating with its allies. According to Secretary-General of the Council of the European Union Jeppe Tranholm-Mikkelsen, after ten years of crises on economic issues as well as migration and Brexit, “the EU is now beginning to have the capacity to look beyond European borders.” “The EU is trying to move towards the more unitary end of the spectrum, and that makes us a more useful and credible partner, also for the U.S.”

Liselotte Odgaard, a senior fellow at Hudson Institute, notes that an example of Europe’s footprint beyond its own borders is the EU’s ten action points of defensive policies against China’s Belt and Road Initiative from March 2019. These provide member states with backing to adopt cross-border cooperation and industrial policies that address China’s undermining of World Trade Organization regulations in areas such as anti-dumping measures and intellectual property rights.

The U.S. and Europe increasingly focus on own interests

The EU sees China as a challenge and an opportunity, according to Secretary-General Tranholm-Mikkelsen. However, the challenges are a greater priority in the present moment, he notes. “The US is very insistent on its own interests and not always taking into account the legitimate interests of its allies…Although the EU will continue to be strong on values, the EU also has to be a little bit more serious about its interests.” Additionally, the EU must define its role in between the U.S. and China, according to SG Tranholm-Mikkelsen. “We recognize the rules-based order, but we also want to reform it. In particular, the existing order does not always take into account the changing role of China….The natural inclination of Europe is to align as closely as possible with the U.S. Transatlantic relations are deeply rooted in history, in democratic values, in alliance and the transatlantic bond continues to be a key feature in how Europe sees itself in the world.”

“The U.S. is particularly concerned about the trajectory of China,” noted Randall Schriver, the U.S. Department of Defense’s Assistant Secretary of Defense for Indo-Pacific security Affairs. He discussed how China is eroding sovereignty, promoting backsliding in terms of human rights and religious freedom, and is willing to advance its interests using instruments other than peaceful means. “The U.S. is looking to the EU and individual European countries to help address these challenges…The U.S. and Europe are much closer now than a couple of decades ago in our views on the economic and security challenges.” He emphasized that U.S. allies and partners reinforce the foundation of mutually shared principles. According to Schriver, there are a range of mutually beneficial actions that the U.S. and European partners can take, including continued sharing of information and intelligence on the strategic landscape, and aligning policy approaches related to China. He highlighted China’s pursuit of niche capabilities from international partners, and suggested the benefit of a common transatlantic approach on bilateral military engagement with China.

Cooperation on technology and critical infrastructure

Assistant Secretary Schriver also noted the importance of protecting technology and critical infrastructure through internal reform and investment screening, emphasizing the need for sensitive information sharing between allies to remain uncompromised. He noted sharing lessons learned as opportunity for collaboration. U.S.-EU collaboration should address technological cooperation with China, and ensuring that allies are not complicit in China’s repressive activities, such as the detainment of over 3 million people in the Xinjiang concentration camps. Hudson Senior Fellow Tom Duesterberg mentioned that we can help U.S. and European companies offer better packages so they can compete with Chinese companies such as Huawei.

Another area of mutual benefit for the U.S. and EU is in developing collaborative operational approaches. This might entail actual operations in areas such as joint patrols and freedom of navigation operations in the South China Sea to protect international waters; capacity building such as training and education in Indo-Pacific countries; or partnering on strategic port calls to convey to countries that are looking for alternatives to China that they have transatlantic friends and supporters. As an example of collaborative operational approaches, Hudson Senior Fellow Lise Odgaard noted the naval diplomacy of a French carrier group exercising with the Egyptian, Indian and Japanese navies in 2019. This effort supports the EU’s security dialogue with the Arab League and its maritime security dialogue with India and Japan, intended to counter growing Chinese political and military influence in the Red Sea and Indian Ocean regions. The carrier group has a rotating cast of allied ships from Portugal, Denmark, the UK, Italy, Australia and the U.S. participating, demonstrating allied unity between the U.S. and Europe as well as their Asian partners.

Transatlantic cooperation has a sound basis for moving ahead

Secretary-General Tranholm-Mikkelsen notes that “there is a basis for transatlantic cooperation in the four areas mentioned by ASD Schriver and beyond that. We do not need additional forums and instruments for that, we just have to get down to it and do it.”

View the full video from the April 16th event titled, Caught in the Crossfire: Balancing EU relations with the U.S. and China