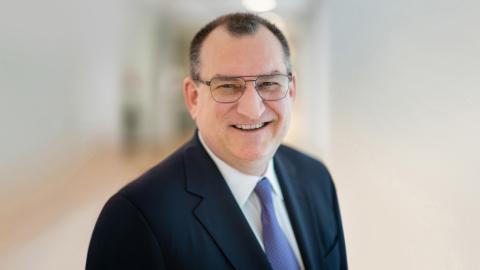 Christopher R. O’Dea is an adjunct fellow at Hudson Institute. A former international investment management executive, he is an authority on capital markets, political economy and public finance, and the security implications of infrastructure finance and governance.

Through his work on infrastructure finance, Mr. O’Dea concludes that China is building a commercial maritime network in which ports, digital logistics capabilities and shipping alliances comprise a new approach to acquiring and projecting economic and political power while mitigating the risk of military confrontation. His original research on this largely unrecognized security threat was published in the Naval War College Review as “Asia Rising: Ships of State?”, which highlights the importance of commercial shipping capabilities to a nation’s sea power, and outlines the national security risks stemming from China’s acquisition of a global shipping and logistical network sufficient to challenge US maritime supremacy.

Mr. O’Dea contends that China has capitalized on the capabilities that supported its export-led growth to establish a global geographic presence akin to what previous great powers acquired through military means. In a world of integrated supply chains, this commercial network affords China with potentially significant influence over political and economic decisions in both developed and emerging-market nations allied with the US, as well as opportunities to gather technology innovation in the West, install Chinese technologies in key industries, and apply Chinese legal approaches to commercial transactions and governance.

His work appears regularly in Investments & Pensions Europe and IPE Real Assets, London-based publications specializing in institutional investment management. He is a contributor to the National Review and Strategika, the Hoover Institution’s online journal that studies past wars for guidance about present conflicts. He has addressed the Hoover Institution Working Group on the Role of Military History in Contemporary Conflict on the subject of “Chinese Mercantile and Maritime Expansion.” Earlier in his career, he served as a bureau chief for the Bond Buyer, the authoritative publication covering US public finance, municipal bond markets, and infrastructure investment, and won a Lisagor Award for Public Service for investigative reporting on municipal bond financing in Chicago. Mr. O’Dea has consulted with the Canadian Department of National Defence on the security ramifications of Chinese investments in port infrastructure, and was awarded a grant by the department’s Mobilizing Insights in Defence and Security program to assess the risks posed by Chinese investment in Canada’s critical economic assets.

A native of Long Island, New York, Mr. O’Dea holds an AB in history from Brown University, where he concentrated on colonial maritime trade. He is a life member of the Naval War College Foundation and a member of Business Executives for National Security. 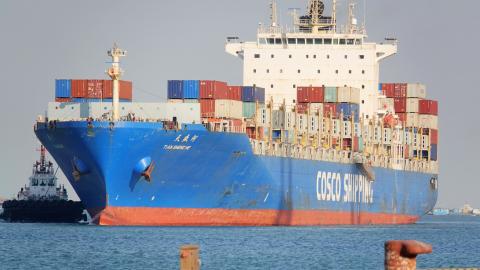 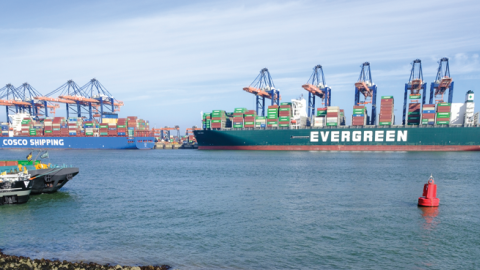 Caption
The Taiwanese container ship Ever Greet next to a vessel of China's state owned COSCO shipping company in the Rotterdam harbor on March 2, 2022. (Photo by Thierry Monasse/Getty Images)
Taiwan—Great Power Deterrence in Maritime East Asia 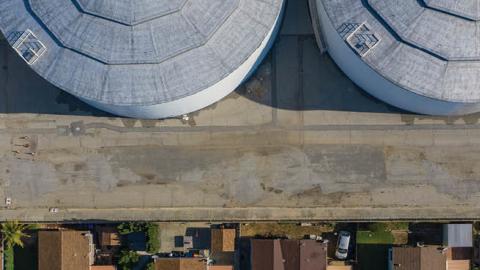 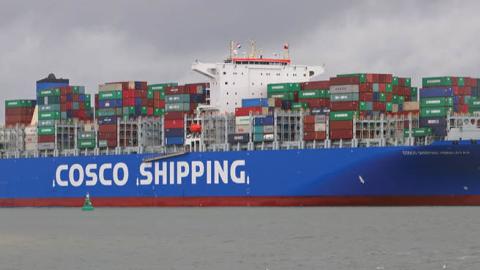 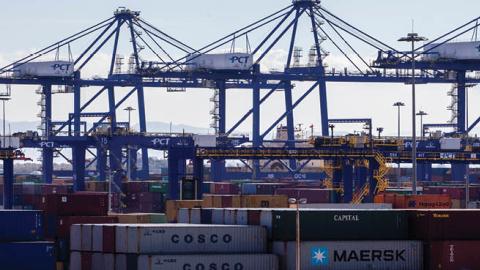 Caption
China Ocean Shipping Company, known as COSCO (COSCO Group), is the company in charge of transportation services in the biggest Port of Piraeus in Greece. COSCO undertook handles those operations in 2008.
The Dark Shadow of Chinese Globalization Falls Over Italy