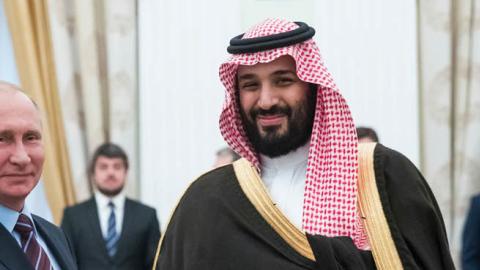 Caption
Russian President Vladimir Putin shakes hands with Saudi Deputy Crown Prince and Defense Minister Mohammed bin Salman during a meeting at the Kremlin in Moscow on May 30, 2017. (Pavel Golovkin/AFP via Getty Images)

To deflect from his failure to deter Russian President Vladimir Putin from invading Ukraine, President Biden has praised his anti-Russia coalition as a triumph of diplomacy. “We prepared extensively and carefully,” he said in his State of the Union address on March 1. “We spent months building a coalition of other freedom-loving nations from Europe and the Americas to Asia and Africa to confront Putin.”

Biden has shunned the Gulf Arabs from his first days in office. He ended U.S. support for the Saudi-led war in Yemen and revoked the terror designation of the Yemeni Houthis, emboldening the group to launch missiles at the United Arab Emirates (UAE). In a pique, the president also froze personal relations with Saudi Crown Prince Mohammed bin Salman (MbS), whom he labeled a “pariah” on the campaign trail. Once in office, the Biden team published an intelligence dossier that pegged the crown prince as responsible for the murder of journalist Jamal Khashoggi.

In an interview this month, MbS responded that such hostility would only harm America. “It’s up to him to think about the interests of America,” he said of the U.S. president. When Putin’s war in Ukraine forced Biden to search for alternative sources of oil, neither MbS nor the leader of the UAE would take his calls. Instead of placating the House of Saud, the president is reaching out to anti-American dictators in Venezuela and Iran. U.S. consumers are paying a high price for these policies at the pump.

A similar story of alienation unfolded recently with Poland. For much of the past year, the Biden team spurned Poland’s government for its national conservatism. But after Putin attacked Ukraine, Poland turned into NATO’s logistical linchpin. Today, it not only offers Kyiv political and humanitarian support but also serves as the transshipment point for military goods. By any measure, it deserves America’s full backing.

Yet, last week the administration undermined Warsaw’s trust in Washington.The U.S. withdrew its support for the transfer of Polish MiG29 fighter jets to Ukraine — an initiative that the U.S. had floated publicly just two days before. What changed? Warsaw sought to make NATO, and not just Poland, responsible for the transfers. The fact that the U.S. blanched at this condition suggests that Poland, had it proceeded unilaterally, would have faced any Russian retaliation alone. In the future, allies may think twice before stepping forward at our request.

If Poland is NATO’s territorial linchpin, Turkey is its Black Sea anchor. Here, too, Biden spent his first year in office downgrading relations. After blasting Turkish President Recep Tayyip Erdoğan on the campaign trail as an “autocrat,” Biden waited for more than three months as president before calling him — and then, to inform him that he was recognizing Armenia’s historical claims of genocide.

Last week made matters worse. As Turkish-supplied drones inflicted heavy losses on Russia in Ukraine, the U.S. lifted sanctions on an area of Syria dominated by an offshoot of the Kurdistan Workers Party, a State Department-designated terror organization at war with the Turkish state. If the U.S. wanted to dissuade Turkey from working together against Russia, it could not have devised a better approach.

The Biden administration is developing policy for a world that no longer exists. The era when the United States could badger its allies one moment and demand cooperation from them the next is over. A new Sino-Russian axis has formed to challenge the United States. To treat our allies with contempt only encourages them to hedge at a time when we can afford it least. Biden is right to speak of the importance of allies, but his actions don’t match his rhetoric.