As hard-liners shuffle for power amid a failing war, Russia’s military could turn even more aggressive. 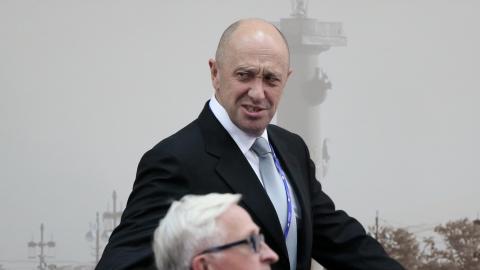 When the European Parliament voted to condemn Russia as a state sponsor of terrorism last month, Yevgeny Prigozhin decided to send a message. The head of Russian military contractor Wagner Group and confidant of Russian President Vladimir Putin announced he would deliver a sledgehammer—shown in a video engraved with Wagner’s logo and stained with fake blood—to the parliamentarians in Brussels. The macabre public relations stunt came just two weeks after Prigozhin praised another video showing the execution of an alleged Wagner deserter with just such a sledgehammer. Prigozhin had also just boasted that Wagner’s army of online trolls would keep interfering in Western elections. “We have interfered, we are interfering, and we will continue to interfere” in US elections, Prigozhin said.

Prigozhin’s public outbursts ostensibly took aim at the West, but his real target sits in Moscow: Minister of Defense Sergei Shoigu. Prigozhin has long been Putin’s pit bull, running covert operations from Africa to the Middle East. Now he sees an opening for greater political power. With Putin’s invasion of Ukraine failing all along the 800-mile front, the Russian leader is searching for culprits, and a battle among different factions is underway. Should Prigozhin come out on top and emerge as the next minister of defense—or even with an expanded role in Russia’s war—it would presage an even more menacing turn in Moscow. That’s because Prigozhin leads a new generation of hard-liners that surpasses even Putin’s old guard in their aggression. Each will have a say in a post-Putin struggle for power or if the Russian Federation fractures.

Putin’s dominance of the Russian Armed Forces has never been absolute, and Putin cannot call on extensive loyalties within the military. Moreover, while during the Soviet era military generals doubled as Communist Party members, today’s Russian military is relatively apolitical. Putin reintroduced the Soviet-era Main Military-Political Directorate in 2018 to indoctrinate the military into Putinism, but there are no political commissars embedded in the Russian Armed Forces such as in Soviet times.

In this context, the Russian military collapse in Ukraine is surely making Putin uncomfortable. By invading Ukraine, Putin has given an institution where loyalty to him is not automatic a reason to despise him. In only 10 months of war, the Russian military has lost more generals and high-ranking officers than it did in seven years in Syria or the Soviets did during their entire 10-year war in Afghanistan. Worse, these casualties hail from the best-trained, most elite units: airborne troops, naval infantry, and combined arms. As long as the West continues to upgrade Ukraine’s military and Moscow’s depleted forces turn to mothballed weapons like the T-62 tank (first introduced in 1961), Russian casualties will only grow. Speculation is rampant that Putin has lost confidence in both Shoigu and Chief of General Staff Valery Gerasimov.

Sensing opportunity, Prigozhin has sprung into action. A close associate of Putin’s since his release from prison decades ago, the 61-year-old Prigozhin is one of only two Russians to command his own personal army. The other is Chechen strongman Ramzan Kadyrov. As an outgrowth of Russia’s brutal wars in Chechnya, the Kremlin has allowed Kadyrov to command his own subnational military units, some of which are active in Ukraine. Although formally part of Rosgvardiya, the Russian National Guard established by Putin in 2016 to protect his rule, Kadyrov’s 20,000-strong army is dominated by ethnic Chechens personally loyal to Kadyrov. This privileged status affords Kadyrov more autonomy than any other Russian commander.

Prigozhin and Kadyrov appear to have struck a tacit alliance against Russia’s military hierarchy. In October, they took their campaign public by criticizing Russia’s military leadership for its poor showing in Ukraine. Prigozhin’s Wagner units are now fighting around the Ukrainian-controlled city of Bakhmut, the latest front where Russia has been on the offensive—even if it has managed only minor, strategically meaningless advances at great cost of life. (Yesterday, Ukrainian President Volodymyr Zelensky paid his troops a surprise visit there, only a few miles from the front, before flying to Washington today.) Prigozhin’s army of trolls has been portraying their leader as an able front-line commander, actively advocating for him as an alternative to Shoigu.

Kadyrov has praised Prigozhin as his “dear brother” and has encouraged his followers to “pay close attention” to what Prigozhin says. In contrast, Kadyrov has taken repeated shots at Russia’s military leadership, contrasting his own commanders, who are allegedly near the front line, to those who sit “in warm headquarters tens of kilometers away.” If Prigozhin’s prize is the ministry of defense, Kadyrov’s goal may be to establish himself as the regime’s praetorian guard. The more the Kremlin depends on him, the greater is his freedom of action in Chechnya.

Seeing an opportunity after the regular military’s war plan failed, Prigozhin is now transforming the Wagner Group from a military company into an actual shadow military. Compared to the increasingly supply-constrained Russian military, Wagner now has excellent access to advanced weapons and platforms, such as Su-25 attack aircraft and T-90 tanks. It is also recruiting crews to run advanced systems normally restricted to the regular military, such as S-300 missile systems, Pantsir air defenses, 203 mm heavy artillery, and TOS-1A thermobaric rocket launchers. No other private military company in the world operates strategic missile systems like the S-300. In two Russian regions near Ukraine, Belgorod and Kursk, Prigozhin has established parallel military structures, including training facilities and recruitment centers. Earlier this month, he inaugurated a major defense technology center in St. Petersburg.

The extent to which Prigozhin and Kadyrov are free agents or directly working at Putin’s behest is unclear. But both are playing a power game and have crossed what has been a clear red line since Soviet times—until now, officials were supposed to downplay military setbacks, not highlight them as these two men have done. Neither has faced pushback from the Kremlin for their sins.

Instead, Prigozhin and Kadyrov are pushing out key personnel. The commander of Russia’s Central Military District, Gen. Alexander Lapin, was reportedly sacked just weeks after Kadyrov and Prigozhin targeted him for dismissal by publicly showering him with criticism. Meanwhile, their preferred commander, Gen. Sergei Surovikin (known as the “butcher of Syria” for his relentless bombing of civilians there), was made overall commander of Russian forces in Ukraine. Prigozhin celebrated the move by calling Surovikin a “legendary figure … born to serve his motherland faithfully” and has not wavered in his support.

This is because Surovikin is truly a hard-liner’s dream. As a young battalion commander, Surovikin took part in an attempted military coup to depose Soviet President Mikhail Gorbachev in August 1991. Known as the “butcher of Syria” for his activities as Russian commander there, Surovikin has demonstrated a penchant for targeting civilians, de-populating territories, and destroying critical infrastructure.

As overall commander for the war in Ukraine, Surovikin may well succeed Gerasimov as chief of the General Staff. His less brutal rivals for the top post, Gen. Alexander Zhuravlyov, former commander of the Western Military District, and Gen. Aleksandr Dvornikov, former commander of Russian forces in Ukraine, are increasingly out of favor with the Kremlin. Surovikin, Prigozhin, and Kadyrov form a triangle of hard-liners whose fortunes are rising at the same time.

Putin still sits atop the Russian system unchallenged, not least because he has made sure that all lines of loyalty lead directly to the Kremlin. As the war in Ukraine drags on and accelerates unexpected shifts in Russian power dynamics, the trio of Prigozhin, Kadyrov, and Surovikin may be the most significant nexus of new power to have emerged. They may not yet herald any challenge to Putin’s rule. But the prospect that the influence of these three hard-liners is jointly growing should ring alarm bells for Western policymakers.