Why Greenland is Really About China 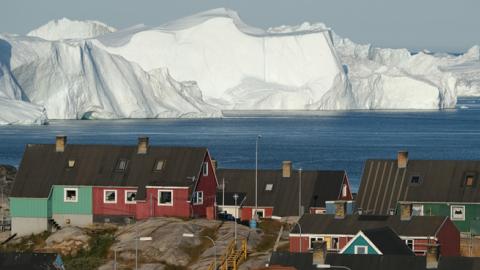 Caption
Icebergs floating at the mouth of the Ilulissat Icefjord loom behind the town center on July 30, 2019 in Ilulissat, Greenland. (Sean Gallup/Getty Images)

President Trump raised eyebrows and set off a few alarms when he recently expressed interest in purchasing Greenland. But the real story underlying this interest is that China has long understood the relationship between commercial infrastructure projects and global power, and it has weaponized many of its commercial relationships. Washington has yet to develop a strategy to counter Beijing. President Trump reportedly became concerned when he learned about the extent of Chinese investments in this strategic island, which lies at a critical juncture in the North Atlantic, contains rare earth mineral deposits, and is home to a United States Air Force base that is central to American homeland defense architecture.

China has recognized the importance of Greenland since at least 2015, when its state enterprises began to invest in mining companies there. China has invested in at least four key mining operations in Greenland, adding to its dominant position in the rare earth element market. Rare earth elements have unique properties essential to high technology products. They are vital in critical defense applications like fighter jet engines, missile guidance systems, as well as satellite communications systems, not to mention mobile phone and electric car motors. While the United States could once rely on its own resources for rare earth minerals, it is now almost fully dependent on imports, mainly from China.

Chinese rare earth investments are just one example, close to American shores, of the broader Belt and Road Initiative announced in 2013. This trillion dollar effort is a sophisticated land and sea strategy designed to use physical projects such as railroads, ports, and mines to the advantage of Chinese business and military interests. These physical lodgments in turn will generate political advantages. The provision of loans, capital, equipment, and technical expertise shapes local politics and creates dependencies. The data generated from these projects adds “fuel” to Chinese artificial Intelligence objectives, since such technology requires large amounts of new data to refine its capabilities and applications such as facial recognition, which allows for greater social control.

Moreover, funding, building, and operating large infrastructure projects allows China to set standards that other international players must follow. Chinese acquisitions of commercial ports have shifted the development of global supply chains in favor of the mega ships operated by Chinese companies. Chinese infrastructure investments in Greenland and around the world are the equivalent of its technology investment strategies. For decades, China has implemented a technology transfer strategy that includes targeting American companies working on areas key to military applications like artificial intelligence and robotics. China combines this “venture investing” with an aggressive industrial espionage apparatus.

These are some examples of operating concepts central to the global commercial approach that Beijing has taken. Once implemented, these actions provide a foundation for Chinese influence and control below the level of overt military power. It is a form of 21st century strategic depth. The United States must do a much better job of integrating its capabilities to succeed in this competitive geopolitical landscape. We must develop our own strategic operating concepts and new models to counter authoritarian states that use their national resources to the advantage of their state enterprises, which then compete unfairly against Western businesses that must generate market returns for investors, and report on their activities under transparent legal and regulatory regimes.

In response, the White House should consider forming a “connect the dots” task force of business and government leaders to identify the key strategic opportunities around the world, from infrastructure to energy to seaports, and ensure that information is shared among agencies to target opportunities before they are lost, and identify areas where we could recover losses quickly. As a start, we might focus on operating concepts to regain control over rare earth minerals, ensure that access to seaports remains open to American and other Western interests, and defend our advantage in foundational technologies such as 5G cellular networks.

Some nascent efforts that could contribute to these new American operating concepts exist. These include the new Development Finance Institution that will modernize development finance, and the Defense Department using trusted sources of capital to invest in important emerging technologies. But in order to have strategic effects, these specific initiatives must be part of integrated operating concepts.

Such a task force need not take months and months. The fact is that the knowledge is out there, embedded in various government agencies and across the business community. It is simply not being pulled together and coordinated. As a result, the United States is failing to maximize all of its considerable economic and political strengths. The time to start is now.