Obama Picks a Side with Iran Deal

Lee Smith on Obama taking Iran at its word 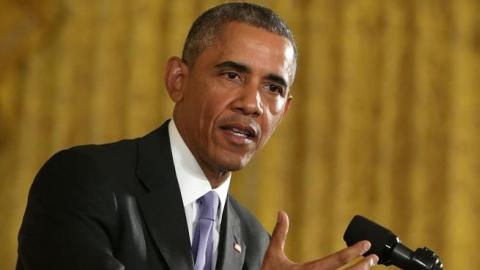 The deal that the United States and its negotiating partners in the P5+1 group of nations struck with Iran on Tuesday morning has nothing to do with Iran’s nuclear weapons program. The Iranians have always insisted that their program was for peaceful purposes, for electricity, and that they have no intention of building a bomb. Indeed, some Iranian officials, as well as their allies in the Western media, argue that Supreme Leader Ali Khamenei issued a fatwa against the construction and use of nuclear weapons.

The details of the Joint Comprehensive Plan of Action (JCPOA) show that the Obama administration effectively takes Iran at its word. Or rather, the White House is happy to look the other way when the regime in Tehran lies about its nuclear program. IAEA inspectors will only have access to suspect sites or be able to interview scientists believed to have worked on military aspects of the program if Tehran grants the UN agency permission. Without free access, the IAEA will not be able to establish the possible military dimensions of Iran’s nuclear program in order to know whether or not Iran is keeping its part of the bargain. There will be no anytime/anywhere inspections of Iranian nuclear facilities; instead, IAEA inspectors will have “managed access” that gives Iran 24 days to hide any incriminating evidence that the clerical regime might be cheating.

The Obama administration does not care whether or not Iran is abiding by the deal, or cheating, because the JCPOA has nothing to do with stopping or even postponing Iran from acquiring nuclear weapons. Obama effectively told the Iranians nearly two years ago that he would not stop them from acquiring a bomb when he refrained from striking Bashar Al-Assad after he crossed his “red-line” against the use of chemical weapons. If Obama would not defend his own prestige by tossing a few missiles in the Syrian desert, he was not going to risk a larger regional confrontation by striking Iranian nuclear facilities. When Obama took the credible threat of force off the table, he signaled to the Iranians that he would not stop them from building a bomb.

It hardly matters to the White House that the deal it struck with Russia concerning Assad’s unconventional arsenal is worthless since Assad continues to use chemical weapons on his own people. Similarly, the JCPOA will not stop Iran from continuing to progress on its nuclear weapons program. But that’s irrelevant. Just as the deal that John Kerry signed with Serge Lavrov in the fall of 2013 was not really about Assad’s chemical weapons, the document that John Kerry and his Iranian counterpart Mohammad Javad Zarif signed Tuesday morning is not really an arms agreement. Rather, the JCPOA is more like an employment agreement between the United States and its new subcontractor, the Islamic Republic.

Obama has repeatedly talked about a new geopolitical equilibrium balancing traditional American allies, like the Gulf Cooperation Council (GCC) states, with Iran. This new “equilibrium” would, from Obama’s perspective, stabilize the Middle East, and prevent further sectarian warfare. But the details of the JCPOA show that the president is not really interested in balance. If Obama wanted “equilibrium,” he would not have agreed to lift the UN arms embargo in five years’ time.

For instance, since the start of the Syrian civil war, Obama has warned America’s traditional regional allies not to fund and support rebel groups, but ending the arms embargo sends a message to the Iranians that it’s OK if they back and arm their allies. The White House believes that a partnership with Iran will allow it to further reduce its profile in the Middle East. The Obama administration tested this new arrangement, from Beirut to Damascus and Baghdad, where it shared intelligence with Iran and its allies, and in some cases, like Tikrit, coordinated military action.

The JCPOA just makes official what everyone around the region has been watching unfold for several years now. This isn’t about a nuclear weapons program, and it’s not about equilibrium. It’s about Obama picking sides, and he is choosing Iran.