The CCP’s Refusal to Join the U.S. in Arms Talks Intensifies Concerns about China’s Nukes 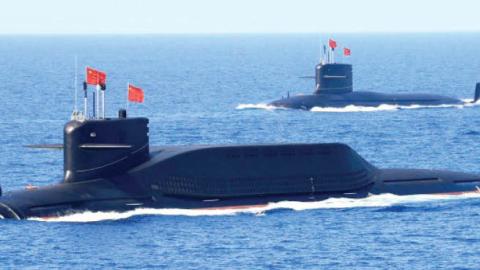 Caption
A nuclear-powered Type 094A Jin-class ballistic missile submarine of the Chinese People’s Liberation Army Navy during a military exercise in the South China Sea in 2018.

China is determined to outmuscle and outmaneuver the United States in every military domain. It would be foolish to base American security strategy on the hope that China’s nuclear arsenal is an area where Beijing is content to maintain a non-threatening force. It’s far too serious a matter to leave to hopes and feelings, and to blindly rely on the words of the Chinese Communist Party (CCP) without any evidence.

We know that China maintains the most diverse missile force on the planet. And we know that China has a nuclear-weapons program that it claims is purely for defensive purposes. We also now know that the Chinese are growing their nuclear stockpile.

At the Hudson Institute in May 2019, Lieutenant General Robert Ashley, director of the Defense Intelligence Agency, said publicly what had until that point been highly classified. He stated: “Over the next decade, China will likely at least double the size of its nuclear stockpile in the course of implementing the most rapid expansion and diversification of its nuclear arsenal in China’s history.”

Of course the DIA director was unable to explain how he knew that, lest he reveal his sources and methods. But his inability to say more frustrated and downright angered some people determined to keep their heads firmly fixed in the sand. It is less taxing and more pleasant, after all, to choose to believe that the nation with the second largest economy on the planet has no intention to threaten the United States with the worst kind of weapon man has invented.

Some analysts and commentators insist that even if it’s true that China might one day grow its arsenal, its supposedly relatively small number of nuclear weapons and delivery systems that can carry them to the U.S. mainland are not menacing. The insistence is not an argument, nor is it compelling on its face.

The size of the Chinese economic engine and its nuclear program’s opacity should cause us to conclude that if the CCP decides to dramatically expand its nuclear forces, it certainly could without warning. Indeed, in May of this year the Global Times, a propagandist megaphone for the CCP, stridently said: “China needs to expand the number of its nuclear warheads to 1,000 in a relatively short time. It needs to have at least 100 Dongfeng-41 strategic missiles.” That isn’t exactly undermining General Ashley’s public assessment about the direction of the CCP’s program.

Moreover, we should resist the tendency of groupthink that says only the number of so-called strategic, as opposed to theater-based, nuclear weapons matters. Instead, we should consider the serious incongruity of Chinese unconstrained operational nuclear warheads (UCONW) versus the United States’. Since they are unconstrained, that means they lack any kind of inspections by outside scientists. The number commonly cited for the stockpile is around 300. But we don’t know how many are operational, and there are plenty of delivery systems that are capable of carrying either conventional or nuclear weapons. It is plausible that there are many more than 300, and based on publicly available news articles and confirmed by a former government official, the CCP’s UCONWs could outnumber the United States’ UCONWs 5 to 1. And if the Global Times writer has his way, that number would balloon even further. For comparison, the United States has roughly 150-200 UCONWs. The rest are curbed by the New START Treaty, which only serves to curb U.S. and Russian so-called strategic nuclear weapons. (Notably, Russia continues to develop exotic nuclear weapons that can reach the United States but do not fall under New START restrictions, clearly violating the intent of the treaty.) In sum, the paucity of U.S. unconstrained operational nuclear weapons whose movements and uses are hidden from international scrutiny relative to China’s both secretive and larger force is not something American strategists should blithely accept.

The reality is, because of Beijing’s unwillingness to even talk to U.S. officials about what it has and what it intends to do with its nuclear force, its nuclear ambitions remain clouded in secrecy, and that is especially true for policy-makers and analysts dealing with purely open sources. When given the choice to give more weight to the account of a closed, autocratic regime’s insistence that its nuclear force will remain small and purely defensive, or the words of America’s Defense Intelligence Agency, one wonders what would motivate someone to go with the Chinese Communists.

The CCP’s stubborn obfuscation about the details and direction of its nuclear-weapons program can only breed distrust for those charged with the responsibility to protect Americans. Taken in the broader context of China’s increasingly provocative military actions and its brazen violations of its explicit international commitments, the distrust is becoming acute and is leading increasing numbers of U.S. officials to more confidently assess that the Chinese nuclear force is deceptively sized, posing an unacceptable threat if left unchecked.

The Trump administration has repeatedly urged China to join the United States and Russia in nuclear-arms talks. While diplomats’ efforts to persuade China are often private, China’s obstinance has elicited a new approach. Ambassador Marshall Billingslea, the administration’s presidential envoy for arms control, has publicly called out Beijing for its unwillingness to so much as join the conversation with the world’s most powerful nations in possession of the most powerful weapons.

In Vienna, Ambassador Billingslea took to Twitter. “ China is a no-show,” “Beijing still hiding behind #GreatWallofSecrecy on its crash nuclear build-up, and so many other things. We will proceed with #Russia, notwithstanding.”

Mr. Billingslea is exactly right to pursue this effort and to rally international support to persuade China to cooperate. China’s insistence on keeping its nuclear program shrouded in secrecy will not work out to its advantage, as U.S. nuclear strategists and planners will be forced to make worst-case-scenario assumptions.