The Look Ahead Series 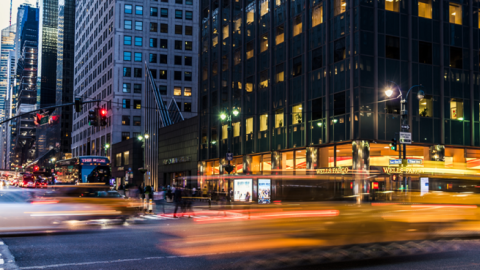 The past year brought an array of challenges on domestic and global fronts: a once-in-a-century disruption caused by the coronavirus pandemic and subsequent economic fallout; social unrest across America’s cities; China and Russia’s increasingly provocative attacks on the sovereignty of other nations. With the breakneck speed of current affairs, what are the key trends, movements, ideologies, and alliances that will shape 2021 and beyond? What frameworks will provide a clear view of the challenges and opportunities of the next ten years?

Hudson created the Look Ahead Series to address these questions. The Look Ahead Series is a collection of policy memos examining the challenges that political, military, and business leaders must contend with today to ensure a secure, free, and prosperous world tomorrow.

Essays in this Series

The US-China Economic Competition: Economic Distancing, But on Whose Terms?

John Lee challenges the widespread belief that economic decoupling began with the US. While many think that China is just now responding to US efforts to decouple supply chains, Beijing is well ahead of Washington and has indicated it seeks to build a vast Sinocentric order filled with submissive “strategic support states” to underpin a hierarchical Chinese order. The US must reframe its approach to China, realizing it is engaged in a broader multilateral contest, and not only a bilateral one.

The US Navy’s Accumulating Challenges

Seth Cropsey, Senior Fellow and Director of the Center for American Seapower

Seth Cropsey examines the US Navy’s current challenges and the perils to US national security posed by poor funding and unclear strategy. Drawing on the recent destructive fire on the Bonhomme Richard warship, Dr. Cropsey highlights the internal and external stresses facing the US Navy, and how an engaged, forward deployed maritime presence is key to preserving global freedom of navigation and maritime trade.

A US Trade Agenda for 2021: Bolstering Global Trade and Countering Chinese Economic Policy

Thomas Duesterberg outlines trade priorities for the next administration and the key role of transatlantic and Southeast Asia trade alliances in countering China’s efforts to dominate key global markets. To avoid the continued routing of Chinese production to third countries like Vietnam, and to counter the growing reach of its Belt and Road program, the United States should consider joining the Comprehensive and Progressive Agreement for Trans-Pacific Partnership while bringing Southeast Asia into closer to alignment with the US-centered economic and political sphere. The United States must take steps to ensure its own economic sphere is large enough, with attendant economies of scale and access to needed human capital, to support its own market-oriented and democratically-governed system.

Reforming the US Military for a New Era

In the face of soaring national debt and an ongoing pandemic, the US military's future will be shaped by growing resource constraints, declining recruitment and the threat of a stronger, more pervasive Chinese military presence around the world. In their new Look Ahead Series essay, Bryan Clark, Timothy Walton, and Dan Patt outline changes the US Department of Defense should undertake to address these challenges through the development of a more affordable, agile, and technologically sophisticated US military.

Towards an Even Stronger Japan-US Alliance

The Indo-Pacific region is home to half of the world's population and many critical maritime shipping routes. It is also emerging as a region that will define international security for years to come. As China's armed forces continue to militarize disputed islands and violate other nations' territorial sovereignty, the US-Japan alliance will play an integral role defending the rules-based international order and a shared vision of a free and open Indo-Pacific. In his Look Ahead essay, Taro Hayashi examines what’s at stake in the Indo-Pacific and how the Japan-U.S. alliance has become a foundational partnership working to promote peace and security in the region.

Under Chinese President Xi Jinping, the policies and rhetoric of the People’s Republic of China have moved much closer to those of the Russian government led by President Vladimir Putin. They see Washington thwarting their claims to regional primacy and assert that US leaders have sought to undermine governments, including their own, under the guise of promoting human rights and democracy. Concerns about China and Russia have earned bipartisan consensus among US national security leaders. Whether cooperative or competitive, the Sino-Russian relationship will remain a US national security priority for years to come.

In many parts of Africa, one’s regional, religious, and ethnic identity are more important that one’s identification with any internationally recognized polity. This will prove a challenge for the incoming Biden administration, writes James Barnett in his essay for the Look Ahead series. Following the 2012 Benghazi attack, restrictions on the movement of US personnel have limited the ability of diplomats to operate outside embassy confines. Likewise, the State Department as a whole is not structured for the type of decentralized diplomacy needed to engage with Africa's powerbrokers outside the central government, be they faith leaders, traditional rulers, or local politicians.

The American Republic and the Authoritarian Challenge

The keeping of the American Republic hasn’t been an easy or gentle task. It has entailed coping with not just the advantages but the problems of being first a rising power, then a great power, then a superpower, then a hegemonic power, and now a power facing other rising powers. In his Look Ahead Essay, Tod Lindberg outlines how the US and world’s democracies can respond to efforts by authoritarian countries to undermine the “American example” and its republican ideals.

Building a Strong and Independent Iraq: Policy Guidance for the Biden Administration

Formulating US policy toward Iraq can be a fraught matter, but it should begin with the realization that Iran has gained a predominant political and military influence in Iraq, notes Abe Shulsky in his Look Ahead essay. The key question is whether the United States should devote significant resources to decreasing Iranian influence in Iraq and promoting Iraq’s political and economic independence. A policy designed to bolster Iraq’s independence from Iran would have to be two-pronged, with continuing pressure on the Iraqi political class in general to stand up to Iran and, in particular, to rein in Iranian-affiliated militias; and political and economic efforts to strengthen Iraqi government and civil society against Iranian interference.

The Structural Constraints on Transatlantic Cooperation

A US-India Trade Agenda for the Biden Administration

Aparna Pande, Director, Initiative on the Future of India and South Asia
Husain Haqqani, Director for South and Central Asia

US Support for Australia and the Region Against PRC Coercion: A Six Point Agenda

Transforming the Middle East: The Origins, Impact, and Evolution of the Abraham Accords