The New Nuclear Window of Vulnerability 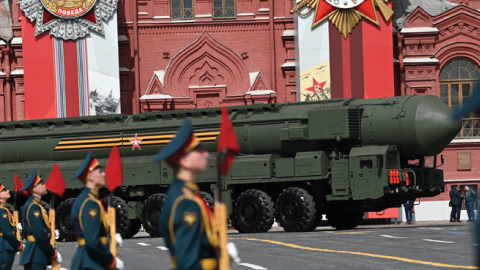 Caption
A Russian Yars intercontinental ballistic missile launcher parades through Red Square during the general rehearsal of the Victory Day military parade in central Moscow on May 7, 2022. (Photo by KIRILL KUDRYAVTSEV/AFP via Getty Images)

The number of explicit Russian nuclear threats to NATO following the Russian invasion of Ukraine has now reached nearly three dozen. The threats have been both against the United States and the West in general but in particular against certain member states especially Ukraine, Poland, Sweden and Finland.

As a result, the existing nuclear balance between the United States and Russia has been highlighted and under much discussion, by concerned officials, to an extent not seen since the height of the Cold War.

This nuclear balance has long assumed to be stable because it was corralled by the 2010 Nuclear New START treaty, now extended for five years, mandating as the treaty does equal long-range deployed strategic nuclear forces between the United States and Russia.

Deterrence was also assumed to hold, as expert commentators explained each of the world’s two largest holders of nuclear weapons could annihilate each other in any nuclear exchange so nuclear threats could be dismissed as largely bluff.

So why the Russian emphasis on threatening nuclear war? Why now? And what should the USA response be?

Many arms control advocates, especially those seeking what is known as “Global Zero”, have pushed for US unilateral restraint to reassure the Russians we mean no harm, while also explaining Russian threats were simply largely bluff and did not need to be taken seriously.

Others, just to cover their bases, concluded that even if Putin was serious, that called for not more nuclear modernization by the United States but more US unilateral nuclear restraint and more arms control, especially the adoption of such strategies as “no first use” of nuclear force.

Absent however from much of the discussion engendered by the marked increase in explicit Russian threats to use nuclear weapons against the United States and its European allies is what characterizes Russian nuclear forces that might give Moscow an edge when possibly using nuclear force? Even after multiple arms control treaties implemented since the initiation of the START process.

Here the discussion has largely missed the boat because the Russian nuclear force structure is indeed in key respects markedly different than the United States, both with respect to forces under treaty limits and forces exempt from such restrictions.

It is true that under New START each of the two nuclear weapons states can deploy 700 SNDVs, or what are termed strategic nuclear defense vehicles—shorthand for long range bombers and missiles that carry nuclear warheads or gravity bombs.

Critical to understanding the contrast between those weapons kept by Moscow compared to the US is what purpose the respective force structures are designed to serve. And how they are structured to achieve such objectives.

For decades the USA has emphasized putting large percentages of our strategic forces at sea, preserving our conventional bomber capability, and limiting land based missiles to single warheads. Not so Russia. Russian emphasis has been on very large multiple warhead land-based missiles which are on alert nearly 100% of the time.

One must then reference the START II treaty signed by President’s Bush and Yeltsin in January 1993, nearly three decades ago. The treaty did reduce countable strategic warheads from 6000 to 3500, a forty percent reduction, a close companion to the fifty percent reduction achieved under the START I agreement of 1991.

But the START II treaty proposed something else which was revolutionary. The agreement banned multiple warheads on land-based missiles, the very large missiles which were the mainstay of the Russian strategic rocket forces.

The implications of the treaty were not lost on the Russians. Gorbachev himself wrote an op Ed in the New York Times in 1996 saying that the START provision banning land based multiple warhead missiles would disarm Russia – – implying that the cost of building large numbers of single RV missiles would be beyond the financial means of Moscow.

Now such ICBMS are on alert at nearly 100%, and unlike older missiles, need not be refueled prior to launch. Such missiles can be on continuous alert every day, month and year without having to change their status, refuel them, or turn them on.

These missiles are ready to go, so that in a crisis no extra action need be taken to ready them for launch.

But however the downside is that large numbers of such Russian missiles, carrying large numbers of warheads (such as a capability of carrying upwards of 10-24 per missile), could be launched suddenly at the United States in an attempt to disarm the United States, hitting our key military assets including all our ICBM silos plus our bomber and submarine bases, leaving us a remaining force of submarines at sea capable of only hitting relatively soft targets in Russia such as cities.

This fear during the height of the Cold War was that Russia with some 10,000 warheads could use just a few thousand to kill all our ICBMs, and destroy our bombers and submarine bases in a pre-emptive first strike, and then threaten further launch against American cities should the US respond.

This “window of vulnerability” it was thought could be closed permanently if all mirved land-based missiles could be banned as START II did. And if arms limits also significantly reduced United States and Russia strategic nuclear forces, which they have, and if modernization of USA forces proceeded, which they are but belatedly, and if a robust USA missile defense was built (which has not occurred) to complicate any possible Russian first strike strategies.

Given the limits under START II of the number of SNDVs each nuclear power could keep, no country could match the warheads deployed on multiple warhead land-based missile with single warhead ICBMs.

For the past two decades, it has been an article of faith that the Russian DUMA formally turned down the START II treaty because the US withdrew from the 1972 ABM Treaty. The charge was missile defense advocates in the USA deep sixed arms control.

It was true the ABM treaty was viewed by the Bush administration as an outdated anachronism which had banned the deployment of missile defenses protecting each nation’s territory, with the exception of an allowed 100 interceptors protecting the Capitol of each nation or an ICBM missile field.

Russia chose to protect Moscow. The US originally chose to protect a missile field in North Dakota but that was eventually abandoned as the Russians could easily overwhelm the defenses with a small portion of its allowed ten thousand warheads under the 1972 SALT agreement.

The SALT agreement was spurred by Soviet General Secretary Brezhnev calling President-elect Nixon in 1968 demanding that the US and the Soviets ban all missile defenses. The Soviets warned that the McNamara “thin” missile defense proposed in 1967 to deal with China was a clever ruse the US was going to use as a means of building a missile defense but not aimed at China but aimed at the Soviets, which would undermine Moscow’s nuclear deterrent.

Nixon did not turn down the proposed ban on defenses, he simply added a proposal to “regulate” the growth in offensive arms as well, with a proposed modest cap of 2750 SNDVs, a few hundred below the then existing level. But still allowing for a five fold increase in Soviet strategic nuclear forces.

According to this Russian official, he and others worked assiduously within the DUMA during 1997-9 (long before the jettisoning of the ABM treaty in 2002-3) to stop the START II treaty from ever being ratified in a form the US Senate would also approve.

Thus, it was the DUMA which added provisions to the Start II treaty that “clarified” the 1972 ABM Treaty, provisions that put new limits and caps on US missile defense deployments, including theater or regional missile defenses for such areas as the Middle East and the Western Pacific, missile defenses which would if banned undermine the protection to US forces and US allies.

In short, what Moscow was looking for was to preserve a “free shot” using its theater nuclear capability, unimpeded by any US missile defenses, as well as an uncomplicated strike capability against the United States with long-range strategic forces, albeit forces markedly smaller today than when the ABM treaty was signed.

In this way, Russian pre-emptive strike plans could remain credible, even as Russia could simultaneously pretend to be all for deterrence and a reset of US-Russian relations.

Parallel to Russia’s multiple explicit nuclear threats against the United States following the Ukraine invasion, has been the realization by US military planners that long before Ukraine, Moscow (at least as early as 1999) has embraced an “escalate to win” strategy where they would threaten to introduce the use of nuclear weapons in a conventional conflict with the objective of getting the United States to cease its fight, and stand-down in the face of Russian aggression.

That is what we are now facing in Ukraine, and may soon face with respect to Taiwan, a nuclear threat we are not now capable of fully deterring.

To remedy things, Congress on a bi-partisan basis added in the new defense bill $45 million for the development of a nuclear armed Navy based cruise missile, a technology the administration’s NPR opposed but the military largely supports.

If added also to a much needed robust missile defense, and a modernized US strategic deterrent, the US will have restored to a considerable degree the stability and deterrence we jettisoned when we failed to secure ratification of the START II treaty, and it’s revolutionary ban on multiple warhead land based missiles. And when we failed to go forward with robust missile defenses even after jettisoning the ABM treaty.