Where To Now for the Trump Administration’s North Korea Policy?

The first two summits with Kim Jong-un fell short, and optimism for the most recent one is hard to sustain. 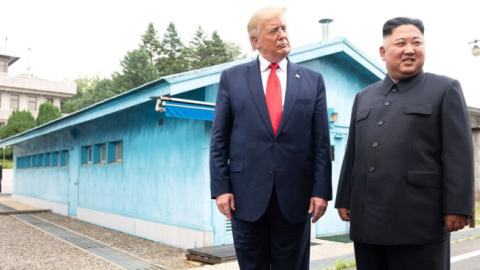 President Trump and North Korean dictator Kim Jong-un have now met three times. With a fair amount of fanfare and hope, Trump had held two summits with Kim. The first was in June 2018. The second, in February 2019. Those summits produced modest consequences. One of them was that, amid an exchange of friendly letters between the two leaders, North Korea refrained from provocative military actions while the United States scaled back joint military actions with South Korea. Then, over the weekend, with dramatic suddenness and circumstance, the two leaders held a third meeting, at the demilitarized zone. The forecasts coming out of each of these meetings, especially the most recent one, were optimistic, but the accomplishments have fallen far short of the goals of both leaders.

Trump’s goal hasn’t changed: to persuade Kim and the rest of the North Korean leadership that their abandonment of nuclear weapons and nuclear-weapons programs in favor of aggressive development of their country’s economy offers a path to greater personal wealth, popular support from the North Korean people, and favorable recognition in history. The administration’s effort, including the offer of U.S. development aid, to eliminate the North Korean nuclear threat by peaceful persuasion is admirable. But just as the first two summits fell short of achieving that goal, so too the meeting to be held among nuclear experts from the two sides, as agreed at the DMZ meeting, will probably fall short.

Like Trump, Kim has not wavered in his objective: to remove the United States as an impediment to the achievement of the ultimate strategic goal sought by his grandfather, his father, and himself. That goal is the conquest of South Korea by force and the unification of the Korean Peninsula under his tyrannical rule.

As they conduct diplomatic discussions at the highest level, both sides continue to pursue their respective goals. For North Korea that has meant and, from all we can see, will continue to mean, the continuation of its annual military exercises, aimed at readying its army to invade South Korea through the tunnels it constructed under the border of the two countries; maintaining its vast array of artillery to the north of the southern border, within range of Seoul; and continuing to develop and strengthen its ability to fabricate nuclear weapons and deliver them by missile, or by other means, to locations as far away as cities in the continental United States.

Early in this summitry period, North Korea imposed on itself a suspension of nuclear and long-range missile tests. That does not suggest an intention to abandon the goal of conquering the South, even though it facilitates an environment in which the North can more easily pursue that goal through congenial discussion with the United States.

Given that North Korea’s actions, if not its words, evince an intention to continue its goal of conquest, the United States will continue to enforce punitive international sanctions and continue its security alliance with South Korea, including engaging in joint military exercises. North Korea has suspended its pursuit of nuclear weapons and its long-range missile tests, and in the same spirit U.S.–South Korea military exercises will continue to be scaled down, to maintain an atmosphere for ongoing congenial discussions, sustaining hope that President Trump will succeed.

There can be no question that security dangers on the Korean Peninsula have been caused by the North’s goal to conquer the South. Kim Il-sung invaded the South in 1950 with the hope that he could achieve that goal. When he failed, the armistice of 1953 ended the bloodshed, but peace did not follow. Kim Il-sung never changed his goal. When he realized that U.S. military support of the South was an obstacle to achieving his goal, he started nuclear weapons and programs for the development of long range missiles, for the purpose of acquiring the means to thwart the U.S.–South Korea alliance by putting U.S. troops and territory at risk.

After Kim Il Sung’s death in 1994, his son, Kim Jong-il, continued and advanced both programs for the same purpose. When Kim Jong-un became dictator on his father’s death in 2011, he redoubled North Korea’s efforts in both programs and substantially increased the threat that North Korea poses not only to South Korea but to regional neighbors that have security alliances with the United States, to U.S. troops, and to the U.S. homeland.

Unless Trump persuades Kim to abandon his ambitions for conquest in favor of economic progress, further diplomacy will be no more successful in eliminating the North Korean nuclear threat. In the unlikely event that he is successful, there will be many additional problems to address. Not least are the perils to Kim Jong-un and the rest of the North Korean leadership as they face the 25 million people of North Korea whom they have starved, imprisoned, tortured, and otherwise deprived of life and liberty, in a pattern dating back 75 years.