Murthy acquired some political notoriety by casting guns as a public health issue, but when it comes to marijuana, he has been, at best, reticent. Asked during Senate confirmation hearings about marijuana legalization, Murthy said more research needs to be done about the drug’s impact before conclusions are drawn. But all available evidence points in one, disturbing direction: frequent and early-onset marijuana use does major damage to IQ, memory, learning, and emotion.

And the link between legalization and increased use is becoming clearer by the day. The point was hammered home by the results of the 2014 Monitoring the Future study released yesterday by the National Institute on Drug Abuse (NIDA). The survey is school-based, reporting on the drug use of 8th, 10th, and 12th graders by type of drug used and by the frequency of use (lifetime, past year, and past month, as well as daily cigarette and marijuana use).

Advocates for marijuana legalization ignore this basic point—it is their claims that marijuana is a “medicine,” and their support for marijuana’s legal, recreational status, that lead children and young adults to discount the very serious risks they face in using this drug.

One can tell people that rattlesnakes make good pets. But don’t be surprised when tragedy ensues.

While this year’s Monitoring the Future study shows marijuana use relatively flat since 2013, the worrisome news lies in the results for youth attitudes and perceptions. NIDA notes a stunning five-year decline of fully 31 percent among 12th graders in perceived risks of smoking marijuana “regularly” (from 52.4 percent in 2009 to 36.1 percent in 2014). 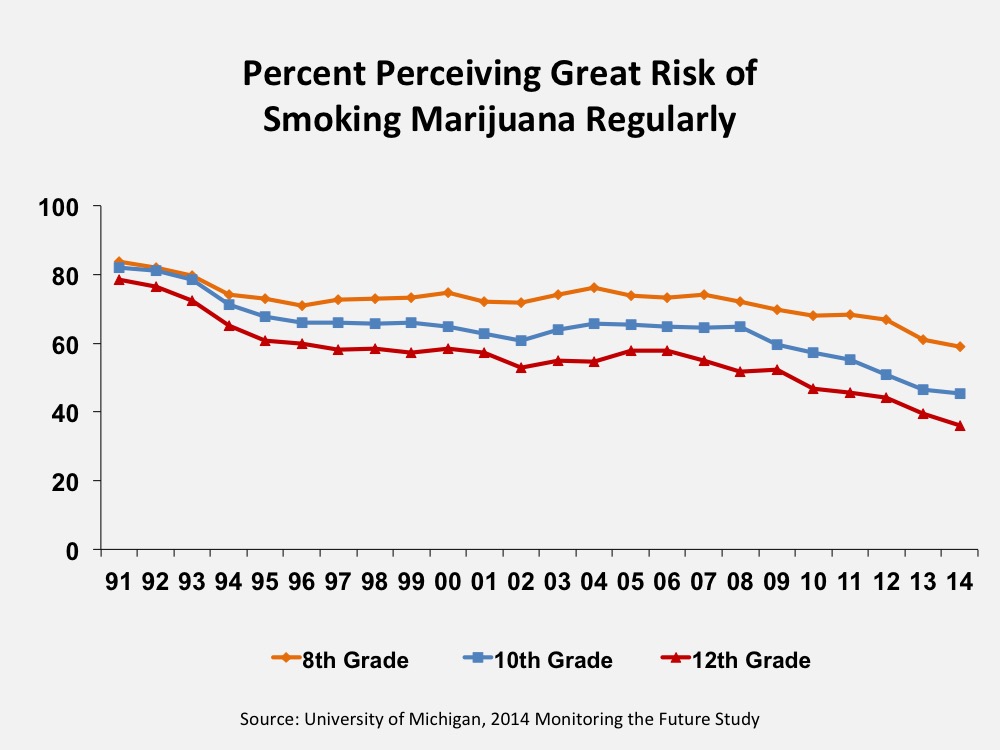 The study also shows a sharp decline in the perceived risks of using marijuana “occasionally”—16.4 percent of surveyed 12th graders thought such use would cause harm, compared with 19.5 percent last year, a 16 percent decline in but a single year. The decline in perceptions of risk may be accelerating.

As norms of disapproval and perceptions of risk for tobacco use are thankfully rising, tobacco use has declined. Perversely, the societal message concerning marijuana is leading us in exactly the wrong direction, and more youth now use marijuana than tobacco. 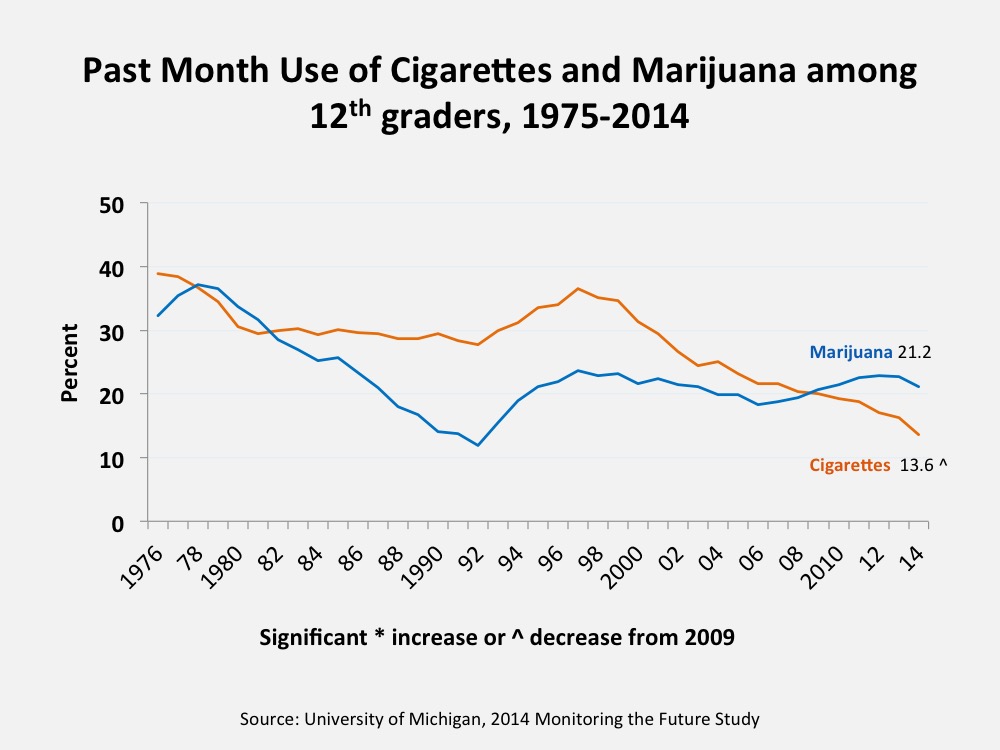 Further, the use of marijuana by youth is in fact steadily up, if you analyze these data over a longer time period than, for example, the Denver Post‘s headlines would have you do. Since 2007, lifetime, past year, past month, and daily use of marijuana among 8th, 10th, and 12th graders combined have all increased (by 13, 9, 16, and 22 percent in the respective categories). Surely the declining perceived risk of marijuana’s harmfulness augers a worsening of these trends, which should deeply worry leaders and concerned citizens.

Equally troubling, consumption of marijuana “edibles” by youth is also strikingly up, and all the more so in states that have approved so-called “medical” marijuana. About 26 percent of 12th graders who reported using marijuana in the past year have consumed edibles laced with the marijuana intoxicant, THC. But in states with medical marijuana laws, the rate is 40 percent of 12th graders, a statistically significant difference. Again, it should not surprise us to find increased drug use in states that put the force of law behind a “medicine” that has not been approved by the Food & Drug Administration—these actions directly alter public perceptions of harm and do so with demonstrable effect: last year’s Monitoring the Future study showed in states with medical marijuana laws that a staggering 40.4 percent of high school seniors reported using marijuana in the past year. In states that do not allow medical marijuana, 29.7 percent of 12th graders reported marijuana use (though the difference between the categories did not attain statistical significance in this year’s study).

Though the results of Monitoring the Future are based on self-reports and hence subject to some misreporting, the study samples used are fairly robust, with more than 40,000 students participating (representing the approximately 18 million public and private high school students in the country). And generally speaking, the studies remain valuable in determining the impact of societal trends regarding drugs—indeed “predicting” the future, which is done in at least two important ways.

First, adolescent drug use presages subsequent drug use all throughout life, as drug use is largely an adolescent-onset behavioral disorder. Therefore, when youth use rates rise, we can expect the impact of that use to cascade through subsequent years. Conversely, the protective effect of shielding children from experimenting with drugs during adolescent years can literally last a lifetime.

Second, as we have seen, steep declines in norms and attitudes among youth regarding marijuana use and its dangers portend greater use in the future. This relationship of attitudes and values to subsequent drug use has been well documented in the Netherlands, a country notorious for its liberalized drug use policies (though policies that have been recently retrenched).

When cannabis coffee shops opened in Amsterdam, researchers did not find the expected surge in Dutch youth marijuana use—lifetime use among Dutch 18- to 20-year-olds was 15 percent in 1984. But as a new generation of Dutch youth came of age under the liberalized regime with commercialized cannabis and shifting social norms, marijuana use rose dramatically, with 44 percent of 18- to 20-year-olds reporting lifetime use in 1996—a threefold increase in just over a decade.

We can similarly expect a looming social disaster if we do not take action to reverse course in our own country. “A mind is a terrible thing to waste,” a famous ad campaign once stressed in support of minority college education. Monitoring the Future showed us yesterday that the minds and well-being of all children and young adults remain at risk. How long must we wait before the Surgeon General casts politics aside and does his duty to the nation? How long before the Obama Administration confronts and rejects the travesty of legal, recreational marijuana?

Biden’s Indo-Pacific Economic Framework Is at a Crossroads

The novel initiative is supposed to usher in a new era of American leadership across Asia. It’s a response to demand for more U.S. economic engageme...

Following is the full transcript of the Hudson Institute event titled Insights on the Upcoming National Security Strategy from Michael R. Pompeo and N...