Almost all observers agree that America is profoundly divided. This intense polarization has been described by the Claremont Institute’s Angelo Codevilla as a “cold civil war.”

What is it all about?

First and foremost, this conflict is between those who unhesitatingly love America, its history, culture, principles, and people and those who believe that “the United States of America,” its past and present, is seriously flawed and, thus, in need of “fundamental transformation” as Barack Obama famously put it.

The former emphasizes the positive aspects of what was once proudly called the “American way of life,” while noting past failings. For the latter, any affirmation of America as it actually has existed for the past two and a half centuries is heavily qualified and accompanied by endless carping about the nation’s sins. At the same time, they insist they support American “ideals,” which they view as synonymous with the goals of a new “social justice” regime that places ethnic, racial, and gender groups at the center of political, economic, and cultural life.

Put otherwise, the conflict is between those who want to transmit the American regime to future generations and those who want to transform it fundamentally. Therefore, the conflict is not simply about policy disagreements over how best to achieve the shared goals of liberty, equality, and justice, but grave disagreements over the meaning of those three principles.

The argument over “first principles” has been brewing for decades. While many were busy luxuriating in “end of history” triumphalism, during the 1990s historians and civic educators essentially uprooted and revised the traditional story of America. Textbooks and curricula now referred to the American “peoples,” plural. The concept of American “peoples” portrayed a multicultural society in which new immigrants were not “assimilated” into a shared mainstream American culture but, instead, retained their own (and sometimes adversarial) cultures as separate “peoples.” This new framework is captured by the metaphor of a “mosaic” or “salad bowl” replacing the traditional concept of the “melting pot.”

We were told America was not “discovered” by European explorers, but was the result of “three worlds meeting.” Leading state curricula declared that the United States was not the product of Western Civilization and British constitutional heritage, but the “convergence” of three civilizations, the Amerindian native culture, European culture, and the civilization of Islamic West Africa. In the same vein, the recently revised AP (Advanced Placement) curriculum refers to the “three worlds meet” narrative as the “Atlantic World.”

Whereas traditional American history began with English colonists landing in Jamestown and Plymouth Rock, multiculturalist educators (who now dominate the profession) place the foundations of the history of the United States with hunters crossing the Bering Strait from Asia to North America thousands of years ago. Of course, American civilization is not the product of nomadic hunters from Siberia, but of English colonists who were part of a broader Western Civilization, and whose single most important text, after all, was the King James Bible.

At the same time that the story of America became the “convergence” of three civilizations and its related “Atlantic World,” the promotion of “diversity” and the trinity of race, ethnicity, and gender came to dominate education from K-12 to graduate school. What mattered was not equality of American citizenship but the racial, ethnic, and gender group to which one belonged.

Meanwhile, “global education” was all the rage as Americans were admonished to “think globally and act locally” and that “global problems” require “global solutions.” The practitioners of global education deliberately obfuscated the rights and responsibilities of national citizenship in a constitutional democracy such as the United States.

This new narrative, although historically inaccurate and antithetical to responsible American citizenship, served the political purposes of its proponents—the delegitimization of the concept of Western civilization and the deconstruction of the American way of life (or the “regime” in the Aristotelian sense) as it had been traditionally understood, with the ultimate goal of “fundamental transformation.”

Since, as the truism puts it, “politics is downstream from culture” the transformationist concepts that were developed decades ago have slowly and steadily spread to the mainstream media, major corporations, and finally elected officials and politicians. 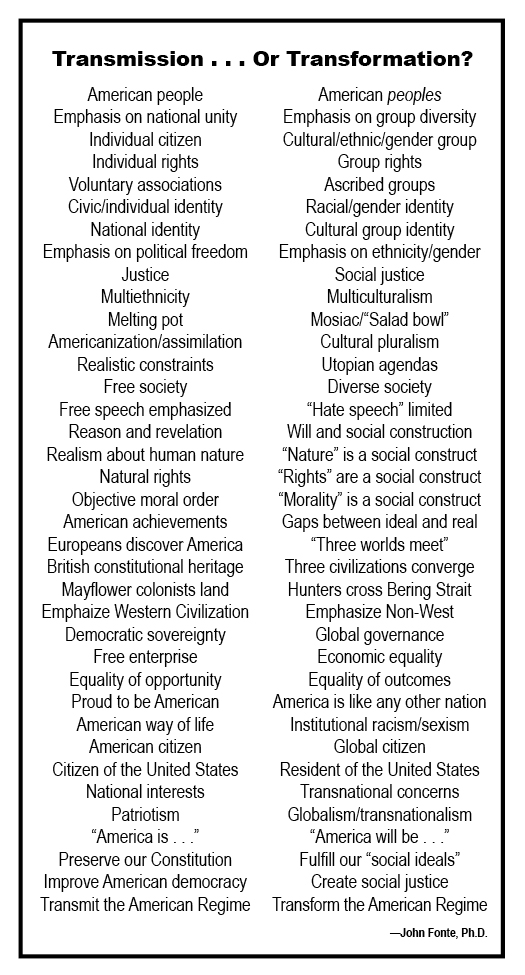 The conflict between the transmission and transformation of the American regime continues to heat up. Around Independence Day, we saw the city council of Charlottesville, Virginia vote to cancel Thomas Jefferson’s birthday holiday; Nike recall the Betsy Ross flag sneakers; the San Francisco School board vote to cover up a painting of the life of George Washington; and in St Louis Park, Minnesota, the city council vote to abandon the traditional “Pledge of Allegiance” before its meetings.

As a way of clarifying the current conflict in contemporary America over transmitting or transforming the American regime, I have developed a chart of 36 dueling concepts pitting one against the other. The chart, examining the “regime conflict,” the “cold civil war” or the “culture war” (whatever term one wants to use) compressed into the table you see on this page.

Americanist forces are striking back. St Louis Park’s mayor, for example, wants the city council to restore the pledge. The Claremont Institute has launched a major project explaining that the most important issue facing our nation is the regime struggle between Americanism and multiculturalism (understood as synonymous with identity politics, political correctness, woke-ism, social justice warrior-ism, etc.). More broadly still, people are beginning to recognize that the multicultural Left has a large megaphone but little popular support.

Americanism is not a dirty word; it’s a good thing. We should be proud to say so—and say no to the fundamental transformation of our country.

On June 20, Israeli Prime Minister Naftali Bennett and Foreign Minister Yair Lapid announced their intention to dissolve the Knesset, teeing up the fi...