A powerful, ready triad remains the most effective way to deter adversaries from conducting strategic attacks against the United States and allies. Its credibility backstops all U.S. military operations and diplomacy around the globe and ensures that tensions— regardless of where or how they arise—do not escalate into large-scale war.

Across Democratic and Republican administrations over the past sixty years, U.S. strategists have determined that for the United States, a nuclear triad is the most strategically sound means to credibly deter adversaries. In an increasingly complex threat environment—facing nuclear adversaries and nuclear aspirants with different national objectives, military capabilities, and strategies—a nuclear triad provides the President of the United States with necessary flexibility while accounting for possible changes in adversaries’ capabilities and the geopolitical environment.2 To remain effective, the U.S. must modernize its Cold War legacy nuclear forces. This booklet is intended to dispel myths surrounding the land-based leg of the nuclear triad and explore the advantages of adopting the ground-based strategic deterrent missile system (GBSD) rather than continuing to recapitalize the aging Minuteman III system.3

MYTH: ICBMs are destabilizing and unnecessary to deter other nuclear states from strategic attack.

FACT: ICBMs, often referred to as the backbone of the triad, are stabilizing.

Hardened silos holding 400 missiles ready for launch are distributed across Montana, North Dakota, Colorado, and Wyoming.4 For a would-be attacker, eliminating all of the silos would present a nearly insurmountable task. Disabling the ICBM force would require a massive and unambiguous attack against the U.S. homeland—and would ensure massive retaliation. The ICBM force is engineered to quickly respond to presidential launch orders sent through a redundant, secure, and hardened communications network. Although the president does not have to launch under attack, this design threatens any adversary with the possibility of prompt U.S. retaliation with the U.S. ICBM force, before the attacker’s missiles reach their targets.

Without American ICBMs, an adversary would need to strike only five targets (three bomber and two submarine bases) to eliminate most of the U.S. nuclear force.

MYTH: It would be relatively simple for the Minuteman III ICBMs to undergo another service extension.

FACT: The Minuteman III relies on decades-old technology and if it is not replaced in the near term, its aging components will eliminate the entire land leg of the nuclear triad by attrition.

In the 2010 Nuclear Posture Review, the Obama administration identified concerns about the aging Minuteman III missile system, noting that service life extension programs (SLEP) would create challenges and thus “impair needed progress.”5 A Pentagon study recommended adopting the GBSD rather than employing another service extension because the GBSD would “meet current and expected threats; maintain the strategic missile industrial base; share subcomponent commonality with the Navy’s ballistic missiles; insert more reliable technology; produce a modular weapon system concept; and have the potential to significantly reduce life cycle costs beyond the current projections.”6

The Minuteman III will begin to age out within the next ten years. The system’s rocket boosters will begin aging out in 2029, its guidance systems will do so in 2031, and its propulsion systems will age out gradually over time.

As each component of the Minuteman system ages, the U.S. inventory will be drastically decreased. As Figure 1 demonstrates, between 2031 and 2033, we should expect that as many as 50 missiles will age out, which will put the arsenal at approximately 350. If things continue on their current course, by 2037, simply by attrition, the U.S. arsenal will be down to fewer than 100, well below minimum operational requirements.7 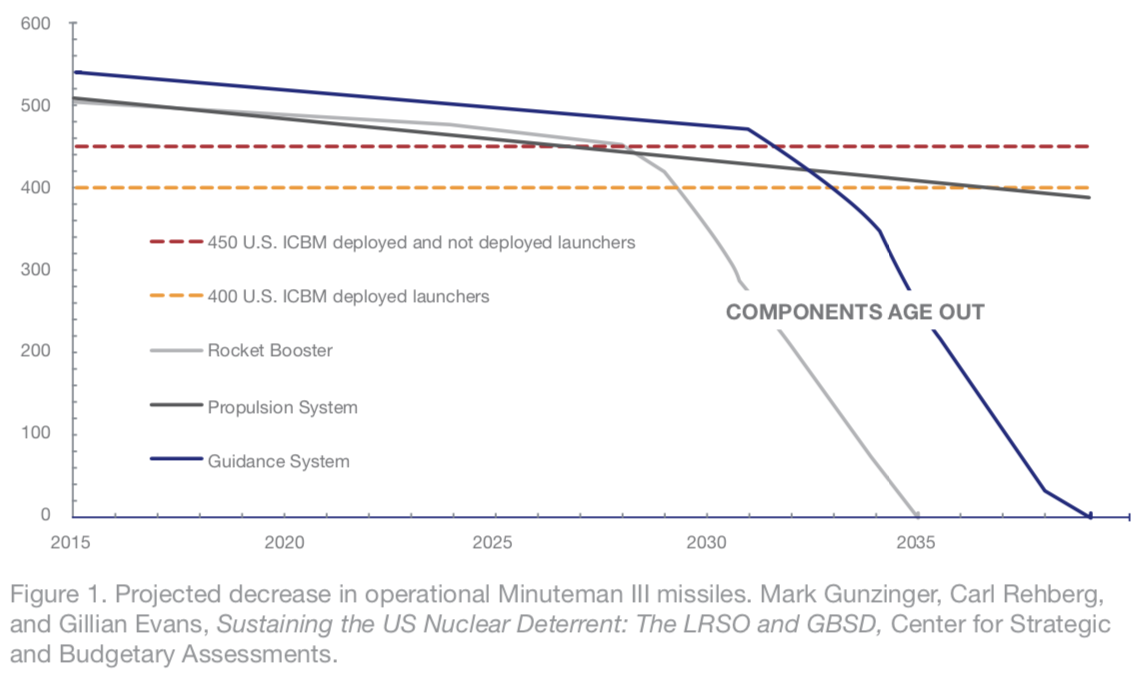 MYTH: The GBSD system will cost more than continuing to maintain the Minuteman force.

FACT: Replacing the Minuteman with GBSD is the most cost-effective strategy due to the GBSD’s lower sustainment costs and enhanced capability to meet future Joint Force requirements.

The Office of the Secretary of Defense Costs and Program Evaluation (OSD/CAPE) conducted a review of the GBSD and concluded that it is the most cost-effective strategy. The estimates determined that a replacement ICBM system would be similar in cost to another MMIII SLEP, except that the new system would provide warfighters the capabilities to meet future Joint Force requirements and lower sustainment costs over its service life. The total fifty-year life-cycle cost for the GBSD is $159.2 billion, while another Minuteman III SLEP would have a baseline cost of $160.3 billion.8 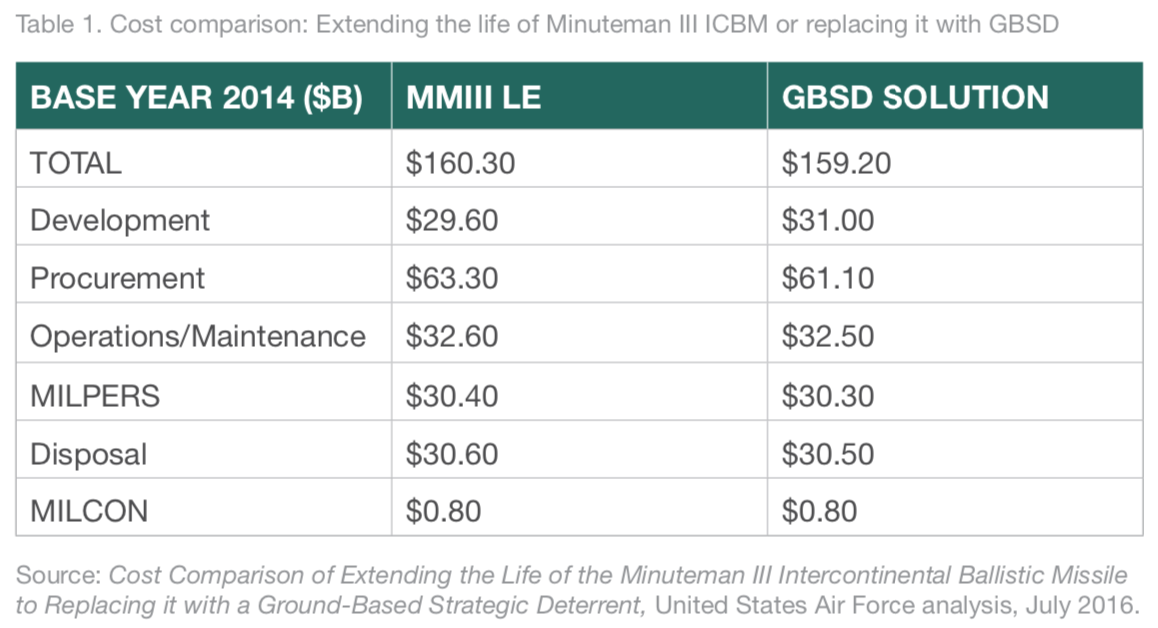 By investing in the GBSD replacement now, the U.S. avoids the risk and cost of a lapse in the protection provided by its ICBMs. The value of U.S. assets should be the most important cost to consider. The U.S. also gains valuable technological superiority and platforms for future developments by investing in the GBSD. The ground-based leg of the nuclear triad is the least costly component to modernize. At a projected cost of between $62–$85 billion,9 the ICBM modernization program is cheaper than the modernization programs for both the bomber ($87 billion)10 and the submarine-launched ballistic missile (SLBM) ($139 billion).11 Land-based missile sustainment costs are also significantly lower than costs for bombers or submarines. The U.S. should continue to invest now to save later. Under the GBSD program, new missiles are designed to last through the 2070s.12

In an attempt to exploit perceived vulnerabilities and invalidate the entire U.S. deterrence strategy, adversary nations are investing in modern ICBMs as well as defense systems that pose challenges to U.S. missiles, as Figure 2 illustrates.13 China, for example, is developing hypersonic strike weapons and ICBMs with maneuverable reentry vehicle (MARV) and multiple independently targetable reentry vehicle (MIRV) capabilities.14 Such advancements complicate the strategic threat environment, threaten U.S. defense systems, and, in the words of General John E. Hyten, Commander, U.S. Strategic Command, give U.S. adversaries the “capability to attack anywhere on the globe with little or no notice.”15 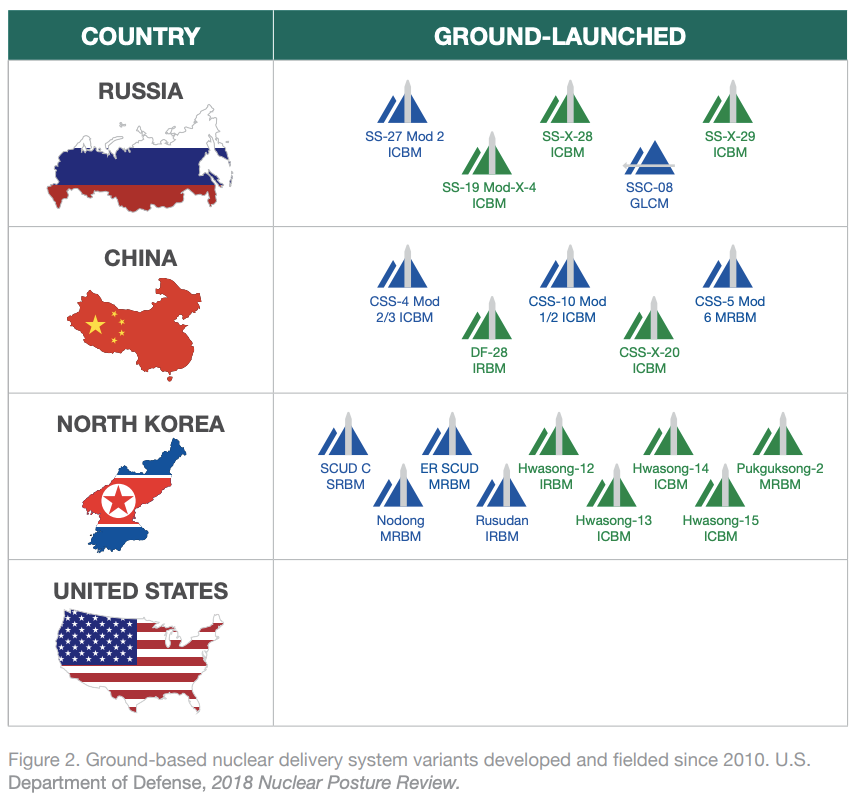 Under the GBSD program, new missiles are designed to outmatch anticipated adversary capabilities through the 2070s. The GBSD system includes new cutting-edge nuclear command-and-control improvements that simply were not available at the time the Minuteman was developed fifty years ago. The new ICBMs will be modular, will permit rapid re-targeting, and could increase the missiles’ payloads to allow for increasingly improved delivery systems.16

Special Assistant to the President, and Associate Director, Government Relations

Transcript: The Future of the Russian Nord Stream 2 Pipeline

Following is the full transcript of the June 15th, 2021 Hudson event titled The Future of the Russian Nord Stream 2 Pipeline ...

Why Tokyo Should Proceed With the Summer Olympics

Think back to January: Daily COVID-19 cases in the U.S. had just hit a new high, people were still discouraged from socializing, and many businesses w...

It’s Time for Biden to Get Tough on Russia

On April 13, as tens of thousands of Russian military forces deployed along the Ukrainian border, U.S. president Joe Biden picked up the phone and cal...