Four Moves to Watch for This Year in Ukraine 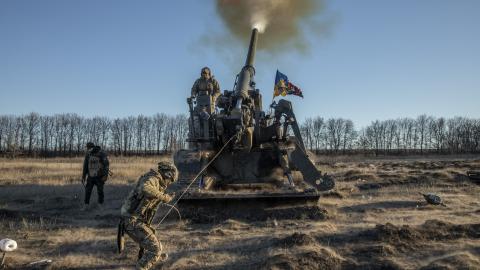 As Russia’s campaign against Ukraine enters 2023 there is no end to the fighting in sight. What began as a planned three-day military operation last February is about to enter its second year of major combat.

It’s difficult to know the exact numbers, but it is clear that tens of thousands of soldiers from both sides have been killed and many more wounded. Thousands of civilians have also been killed, and millions more have been forcibly removed from their homes.

So what should we expect in the war in 2023? There are four developments to watch out for.

The first place to keep an eye on is the area around the city of Bakhmut in the Donbas region of eastern Ukraine. For months, Russian forces — mainly from the private Wagner Group — have tried without success to capture the city. For Ukraine, the priority will be holding the defensive lines near Bakhmut and the surrounding region. Both sides are paying a high price in the battle. Thousands of soldiers have been killed, Bakhmut is essentially flattened, and only about 10,000 of its prewar population of 80,000 remain in the city.

Although Bakhmut holds little military strategic value, both sides have attached symbol worth to it that has made failure there politically difficult. Yevgeny Prigozhin, the Russian oligarch close to the Kremlin who leads the Wagner Group, is acutely aware that his reputation is on the line. Failure to capture the city would mean a major loss of influence in Moscow. Meanwhile, after President Volodomyr Zelensky’s daring visit to Bakhmut last month, abandoning the city to the Russians would be a psychological blow to the Ukrainian people.

Second, if the Ukrainians can stabilize the situation around Bakhmut, it is likely that their focus will be a counterattack in the south. Kyiv’s goal will be to drive a wedge between the Russian-controlled city of Mariupol and Crimea’s Isthmus of Perekop. This means an attack from the direction of Zaporizhzhia with the main objective being Melitopol to the south.

Before the war, Melitopol was Ukraine’s 34th largest city, but its importance is derived less from its size than from its location — near the coast of the Sea of Azov. Its liberation would cut Russia’s land bridge to Crimea in half and put Ukraine within striking distance of many military targets on the peninsula. Melitopol itself is already well within range of Ukraine’s multilaunch rocket systems and the region around the city has been a hotbed of resistance activity.

Timing will be crucial. Since the Russians withdrew from Kherson in November both Ukrainian and Russian forces have been repositioning along the frontline, including the region near Melitopol. Once winter freezes the ground, Ukraine will probably make its move. However, progress will have to be quick. When the snow melts in the spring, Ukraine’s infamous bezdorozhzhia (or “roadlessness”) makes any unpaved road or open field impassable until the summer, because mud.

The third scenario to watch is a new Russian offensive from Belarus. Minsk has already played a useful role for Russia as a staging point for its troops during the initial stages of the campaign in February. Now there are growing concerns that Belarusian authorities could raise their complicity in the Russian invasion to the next level by ordering their own armed forces to attack Ukraine.

If this happens there are two likely courses of action. There could be another assault on Kyiv, or there could be an assault into western Ukraine to disrupt NATO’s supply lines from Poland and Romania. Neither would be likely to succeed, but both would cause enough trouble for Ukraine that its forces would have to be diverted from other points along the frontline.

The final development to watch for in for 2023 is the introduction of Iranian ballistic missiles into the conflict. Hundreds of Iranian-built Shahed-136 “suicide drones” have already been used to target Ukraine’s civilian infrastructure. Although Ukrainian air defenses have shot down many of them, the drones that were able to hit their targets have done significant damage. Much of Ukraine is experiencing rolling blackouts.

Meanwhile Russia is burning through its stockpiles of cruise missiles at a rate it has not expected. According to Ukrainian officials, Russia can produce only about 30 Kh-101 cruise missiles and 15-20 Kaliber cruise missiles each month. Moscow has turned to Tehran to help fill the gap.

Not only is Iran preparing to send hundreds of more drones to Russia for use in Ukraine, but there are plans for Tehran to top up Moscow’s stockpiles with the Fateh-110, a short-range ballistic missile with a range of 300 kilometers. It has been used extensively by Iran and its proxies throughout the Middle East. Iranian-supplied missiles such as the Fateh-110 won’t be a game changer in Ukraine, but they will make life much harder and more dangerous for Ukrainians.

These four developments are what can reasonably be expected in the war for 2023, but it is impossible to predict the future with 100 percent accuracy. As the events of the past year have shown the world, policymakers need to do their best to prepare for any eventuality.

However, one thing is certain: do not expect any meaningful and lasting settlement between Russia and Ukraine to materialize in the coming months. It is unlikely that 2023 will be a year of peace.