Guns of August in the Taiwan Strait, 1958 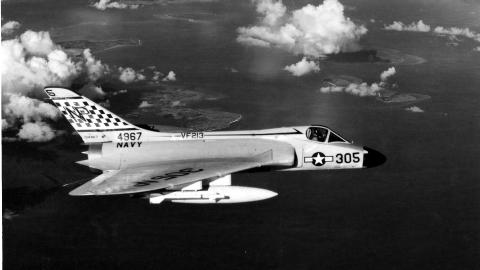 Caption
A US Navy Douglas F4D-1 Skyray assigned to Carrier Air Group 21 (CVG-21) aboard the aircraft carrier USS Lexington in flight off Taiwan, circa 1958. (Wikimedia Commons)

Any Chinese military invasion of Taiwan will plausibly begin with China’s taking by force of the Taiwanese-held offshore islands, especially the island groups of Quemoy, Matsu, Pratas, or even the Penghus. This understanding is not only informed by geography and conventional military wisdom, but also by history.

In August 1958, the Chinese Communist military launched a massive shelling blitzkrieg against the Taiwan-held islands of Quemoy and Matsu just a few miles off the coast of communist China, prompting a major, prolonged, and first serious nuclear crisis the world had ever witnessed. On August 23 alone, the first day of the shelling, the Chinese artillery fired more than 40,000 shells on these tiny offshore islands, with an average 10,000 rounds per day for the following week. Hundreds of thousands of shells would rain on the Taiwanese islands in the ensuing months, with sporadic shelling continuing for nearly two decades until January 1, 1979, when the Carter Administration officially switched US diplomatic recognition from Taipei to Beijing.

All Chinese Communist military provocations on China’s periphery reflect the Chinese Communist Party’s global strategic vision. There is no exception in this case. The primary impetus for the Guns of August in 1958 in the Taiwan Strait was to display Beijing’s belligerent response to America’s military intervention in the 1958 Lebanon crisis, when President Eisenhower in mid-July 1958 dispatched US troops to the Middle East to stabilize the Lebanese government and to repulse Soviet Union-influenced communist infiltration in the region.

The Soviet Union and Communist China reacted virulently to America’s Middle East intervention. In late July, Nikita Khrushchev flew to Beijing and spent days with Mao Zedong on communist global strategy in combatting America’s moves in the Middle East and beyond. On August 3, Khrushchev and Mao issued a joint communique from Beijing demanding American forces’ withdrawal from the Middle East. Failing to get a response from Washington, China engineered the Quemoy-Matsu crisis to showcase Mao’s proletarian internationalism and cantankerous bravado.

Mao’s reckless military adventurism was also aided and encouraged by Washington’s dangerously quixotic ambiguous policy on Taiwan’s offshore islands defense. In Mao’s Machiavellian calculation, shelling Quemoy and Matsu would have an enormous propaganda value to him, yet be far less risky in invoking a full-scale US attack on China, because while Washington had been crystal clear, via a mutual defense treaty, about defending Taiwan and the Penghus, the Washington-Taipei mutual defense arrangement did not cover the offshore islands, which were viewed by Washington as undefendable, rendering their defense at the discretion of the White House. Had Quemoy and Matsu been included in the 1954 Sino-US Mutual Defense Treaty, there would not have been the Guns of August in 1958 in the Taiwan Strait.

Washington’s Taiwan policy flaws notwithstanding, the US military’s response to the Chinese Communist provocation was swift, massive, and methodic. The US Navy assembled the largest naval force since the Korean War and immediately dispatched it to Taiwan, including the two super carriers Midway and Essex, both escorted by their destroyer convoys; the 7th Fleet greatly expanded its general war targets; the US Marine Corps rushed 56 combat aircraft to Taiwan from its base in Atsugi, Japan; overcoming formidable logistical challenges, the US Air Force deployed an unprecedentedly large air power in and around Taiwan within three weeks, including the nuclear capable Matador cruise missile squadrons quickly installed in Tainan; and on August 25, the US Joint Chiefs of Staff ordered expeditious deployment to Taiwan of the most advanced surface-to-air missile Nike Hercules. Scores of American piloted F-104s, F-86Ds, F-100Ds were sent to bases in Taoyuan, Hsinchu, Tainan, and Chiayi, with many more fighters, bombers, airlift, and reconnaissance aircraft spread out in the Philippines, Okinawa, and on US aircraft carriers, all made available to US Pacific Command to counter a PLA invasion of Taiwan.

US military planning was deliberate and decisive as well. Admiral Harry Felt, the chief of US Pacific Command (CINCPAC), achieved a remarkable unity of command among different services, designating Vice Admiral Roland Smoot to head the Taiwan Defense Command with coordinating and command authority over the commanding general of US Army Force Taiwan (the default head of the Military Assistance Advisory Group or MAAG), commander of Taiwan Patrol Force (Navy), and the commander of US Air Force Taiwan (ATF 13).

Throughout the Quemoy-Matsu Crisis of 1958, the Chinese Communist forces were on the offense while the Taiwanese and the US military were on the defense, with most of the combat engagements in the sky between the Chinese Communist and the Taiwanese Nationalist pilots. The PLA air force confronted Taiwan’s superior training and US Sidewinder missiles, and suffered heavy losses. On September 9, for example, 12 Taiwanese F-86 Sabres fought 12 PLA MiG-17s. Seven MiGs were shot down. On September 24, the Taiwanese pilots destroyed another 10 PLA MiG-17s and damaged at least four more. During the entire crisis, the Nationalist Air Force from Taiwan shot down 31 PLA MiGs, with a loss of only two F-86s.

The US Joint Chiefs of Staff had a clear set of rules of engagement regarding the scale and involvement of US military intervention. It envisioned three-stage war scenarios with specific engagement and targeting instructions on each. In stage one, if the PLA would only bombard the offshore islands without attempting to capture them,  the US forces would only assist the Taiwanese with logistical support in resupplying the islands. In stage two, if the Chinese would try to take any of the offshore islands, the US forces would assist the Taiwanese in attacking the Chinese invading forces and military installations “in the vicinity of islands under attack.” In stage three, if the communist forces should attack Taiwan island itself or the Penghus, or the international waters close to either Taiwan or the Penghus, the US and Taiwanese forces would launch air strikes against Chinese mainland airfields, PLA ground control intercepts, and command headquarters close to coastal military facilities and fixed targets. It was further planned that in stage three, the targets would also include all the Chinese airfields in an 800-mile radius capable of supporting the Soviet-built jet bomber Il-28. There were over 250 of them in China at the time.

With swift, massive public show of US resolve and American military deployment in defense of Taiwan, the Chinese Communist forces were forced to restrict its actions to only stage one. Peace and stability were preserved in the Taiwan Strait, at least for the moment. The world would learn a lesson from the Guns of August in 1958. How to respond to the military tensions in the Taiwan Strait triggered by the Quemoy-Matsu Crisis of 1958 would become the dominant foreign policy and international security issue in the historic 1960 Nixon-Kennedy presidential debates, serving as a useful background to President Kennedy’s legendary response to the world’s next nuclear crisis only two years later, the 1962 Cuban Missile Crisis.