The Su-35 procurement is not only a defense deal but also a strategic manifestation, proving the bitter cost of appeasement and naivety. 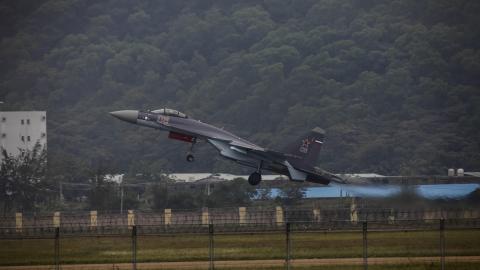 Taking advantage of Russia’s growing reliance on low-cost Iranian weapons amidst its stumbling campaign in Ukraine, Iran is now set to procure dozens of Russian Su-35 aircraft. While some Western assessments tend to downplay the gravity of the acquisition, claiming that it would not drastically alter the airpower balance in the Gulf, the Su-35 would give an unprecedented boost to Tehran’s control over the Iranian airspace. Such a capability development effort is particularly dangerous as the regime is moving closer to a nuclear bomb.

More importantly, the ambitious barter of Russian Su-35 fighters in return for Iranian drones, and probably ballistic missiles, manifests a grim calculus for the West. Contemporary military transactions between Tehran and Moscow have unveiled a new geopolitical episode. Washington and its allies are now facing a more aggressive and hostile axis than ever.

Enter the Su-35: The Flanker on Steroids

Given Tehran’s obsolete air warfare arsenal and very large airspace, the Su-35 is a very lucrative catch. Hailing from the Flanker baseline, the Su-35 is a Russian 4.5th generation air-superiority fighter that has a better thrust-to-weight ratio than its predecessor, the Su-27. The platform is super-maneuverable, meaning that it is capable of performing controlled maneuvers that would otherwise be impossible via regular aerodynamics. Its thrust-vectoring engines, the nozzles of the Saturn AL-41FS turbofans, can independently point in different directions. This kinematic edge allows the Su-35 to pursue very high angles of attack and makes it capable of moving in one direction when its nose points in another. The aircraft enjoys potent agility and Mach 2.25 maximum speed. The R-73 missiles, which Iran will probably receive, can be fired “off-boresight” at enemy platforms outside the frontal cone of the aircraft via helmet-mounted sights, enabling at least a 70 percent kill probability. Overall, we are talking about a truly menacing aircraft, especially when it comes to within-visual-range air warfare.

The Su-35 should also be treated carefully in beyond-visual-range combat as well. The aircraft’s X-band, passive electronically scanned array (PESA) Irbis-E radar is highly powerful. The official factsheet claims that the Irbis-E radar’s detection range is between 350 and 400 kilometers for a target with a 3m2 radar cross-section, which is comparable to a standard fourth-generation fighter with no low-observability features. The Su-35’s radar configuration and the digital cockpit provide the pilot with good frontal-aspect awareness.

The Irbis-E radar supports “track-while-scan” (TWS) mode for up to eight targets in long-range air combat. Simply put, TWS mode offers a trade-off between lower resolution (due to limited radar energy directed on targets) and being able to engage multiple targets at a time. Lessons learned from the ongoing air war in Ukraine suggest that when the Russian Su-35s launched R-77-1 beyond-visual-range (BVR) missiles, supported by the Irbis-E radar’s TWS mode, the Ukrainian pilots did not receive any warning from their radar-warning receivers (RWR) for a long duration. While relying on TWS decreases the chances of a kill compared to single-target-track, it puts pressure on the adversary within a large air theater. As a result, a combination of the Irbis-E radar and R-77-1 BVR missiles with active radar guidance would foster the Iran air deterrent’s combat air patrol (CAP) capacity.

While Tehran’s Su-35 procurement alone would not turn the Middle East’s military balance upside down, it will definitely make Iranian airspace a more pernicious place to operate. This potential change would pertain to the Iran–Gulf Arab military balance as well as Israel’s preventive strike card.

Except for Israel, Washington’s allies in the Middle East do not operate fifth-generation, stealth tactical aircraft. While it does not mean that American (advanced F-16 and F-15 variants) and European (Eurofighter Typhoon and Rafale) solutions are dwarfed by Russia’s Su-35s, one thing is clear; no expert can claim absolute superiority favoring the 4th and 4.5th Western aircraft against the latest Flankers. This military calculus is a problem in itself. Because, just like the United States Armed Forces, Washington’s allies in the region have not engaged in any armed conflict without enjoying an undisputed defense technological edge.

With outgoing defense minister Benny Gantz hinting at the prospects of preventive military action against Iran’s nuclear program “in two or three years,” Iran’s Su-35 procurement has gained additional importance. As to any Israeli F-35I versus Iranian Su-35 scenario, one has to consider doctrinal approaches in modern air combat and military theory.

Conventional wisdom suggests that thanks to its advanced sensors suit (including its AESA radar), an F-35 Joint Strike Fighter would detect a Su-35 further away than the Su-35 could detect the Joint Strike Fighter. Besides, the F-35’s NATO-standards datalinks and network-centric information superiority assets are more advanced than those of the Su-35. Furthermore, the beyond-visual-range gap between the two aircraft does not merely emanate from the F-35’s state-of-the-art intelligence capabilities or its stealth status. The Su-35, like the rest of the Flanker baseline, is a large platform in the tactical aircraft segment. Besides, its high-thrust engines make it extremely detectable.

Overall, one can assume that the F-35 would land the first punch in a brawl before the Su-35 anticipates that the duel has started. Nevertheless, two critical factors challenge this optimistic assessment.

First, in a hypothetical preventive strike scenario, Israel will have a very limited, if any, chance for dispatching combat search and rescue missions in hostile Iranian territory. Besides, given the military-geostrategic imperatives, Israeli aircraft will not have all the time in the world to accomplish their missions and head back home. The Islamic Revolutionary Guards would be after every single Israeli pilot to gain political leverage. Aerial combat is not a cage fight where two athletes, with other conditions remaining the same, fight in an isolated octagon. In case of a military action to delay Iran’s nuclear breakthrough, Israeli F-35Is will have to operate deep in Iranian airspace protected by a network of layered defenses, as well as the Su-35 CAPs. It is not a secret that the Revolutionary Guards have been after the Russian S-400 strategic air defense system for a long time. With Russia being desperately reliant on Iranian drones and missiles, Tehran might be very close to securing an S-400 deal in addition to the advanced aircraft. While this lethal combination would not render the preventive strike option impossible, it would decidedly alter the risk assessment.

Second, although present war-gaming results are more accurate than ever thanks to computational simulation technologies, we still do not have any tangible combat record to grasp how the F-35 versus the Su-35 bout could play out. Let us revisit some important facts: Unlike America’s other fifth-generation tactical aircraft, the F-22 Raptor, the F-35 is not an air-superiority platform. The F-35, therefore, would have to rely on its stealth, superb sensors capacity, and advanced beyond-visual-range weapons to survive against the Su-35. The Russian Su-35, however, is a textbook air-superiority aircraft with a distinctive design philosophy suitable for hunting down enemy platforms. The Su-35 can easily outpace and outmaneuver the F-35 if it comes to that. Almost all military writings, which rightfully favored the F-35 over the Su-35, assumed that an engagement would not boil down to within-visual-range air combat for obvious reasons. However, the ironclad Clausewitzian principle of warfighting, the friction factor, spells Murphy’s law for combatants: anything that can go wrong will go wrong.

The greater geostrategic picture is not any better than the military aspects of Iran’s Su-35 procurement. Having already transferred thousands of loitering munitions to Russia, Iran has become a major drone warfare systems supplier to the world’s second-largest arms exporter. Tehran is actively backing Putin’s invasion at NATO’s east while running a brutal crackdown at home. This is not a peacetime trend. Almost every week, the Russian military is deliberately targeting Ukraine’s critical infrastructure and population centers with Iran-manufactured Shahed-136 and Shahed-131 kamikaze drones. Worse, Iran is now ready to transfer its Fateh-110 derivative short-range ballistic missiles to support Putin’s expansionist agenda in the post-Soviet space. Fateh-110 derivatives carry highly destructive warheads and follow a quasi-ballistic trajectory which makes them harder to intercept. If delivered in large numbers, Iranian ballistic missiles can cause massive civilian casualties in Ukraine.

In return, Iran is getting a pretentious defense package from Russia. The bad news is that the planned Su-35 deliveries might only be the tip of the iceberg. Hypothetically, Russian anti-ship missiles and strategic SAM systems would provide Iran with critical capabilities. Certain Soviet-remnant missile engine technologies can even help Iran develop intercontinental ballistic missiles (ICBM) suitable to carry strategic nuclear payloads.

The geopolitics of the new challenge is highly dynamic. Tehran and Moscow have maliciously established a military logistics route stretching from the Caspian Sea to the Don-Volga Canal and the Sea of Azov. Iranian drone proliferation is now an eastern flank challenge to NATO. Likewise, advanced Russian air-superiority fighters will soon protect Iranian skies when the regime is moving closer to obtaining a nuclear warfare capacity.

These besetting developments happened because nations like Russia and Iran exploit any sign of weakness. After all, NATO’s frontier in Eastern Europe is now plagued with mass graves, like the ones in Bucha and Izyum. But Vladimir Putin is well are that the Biden administration will not provide Ukraine with ATACMS tactical ballistic missiles. The ruling elites of Iran, who are currently busy with drumhead courts and mass executions, know that their drone and missile transactions with Russia mark a clear violation of the United Nations Security Council resolution 2231—the resolution which endorses the nuclear deal. However, the ayatollahs are relieved to see that Western administrations have been silent regarding Iran’s escalations. In a broader sense, the Su-35 procurement is not only a defense deal but also a strategic manifestation, proving the bitter cost of appeasement and naivety.

Read in The National Interest.