Flurry of Kiev Assassinations a New Russian Front in Ukraine

If you didn’t know any better, you’d think the wild 90’s were back in Kyiv 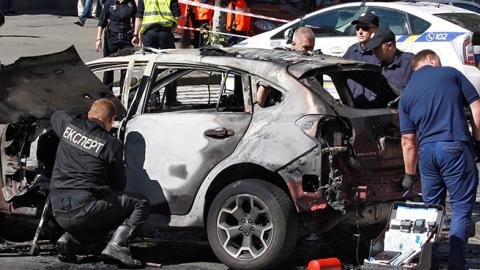 If you didn’t know any better, you’d think the wild 90’s were back in Kyiv. A recent spate of car bombings, brazen assassinations and attempted murders are reminiscent of the immediate post-Soviet years when politicians, businessmen, and mafiosos grappled with each other—often bloodily—for power in their countries.
Since July 2016, when the Belarusian-turned-Ukrainian investigative journalist Pavel Sheremet was killed by a car bomb detonated in the middle of a Kyiv street, the flood gates have opened. Although Sheremet’s colleagues believe that he was murdered for his journalistic endeavors, most of the deaths that have followed look as though they were orchestrated by Russia as part of their ongoing campaign to destabilize Ukraine.

That the Ukrainian government proved themselves useless in finding Sheremet’s killers and bringing them to justice made it clear to Russia that they too could act similarly and do so without impunity.
Since Sheremet’s murder, two Ukrainian army colonels have been killed by car bombs and two pro-Ukrainian Russian nationals targeted for assassination. On June 27, Maksim Shapoval died when a bomb placed in his car exploded in Kyiv. His colleague Lieutenant Colonel Oleksander Kharaberiush perished similarly in March 2017 in the southeastern city of Mariupol. Both men worked in military intelligence.

March 2017 also saw the assassination of Denis Voronenkov, a former Russian lawmaker who had absconded to Kyiv and was helping Ukrainian authorities to prepare their case against former Ukrainian President Viktor Yanukovych. He was shot down in central Kyiv despite having a bodyguard at his side.

The Chechen nationalist and Russian citizen Adam Osmayev was lucky enough to survive. He first came to Ukraine to command the battalion of Chechens who are eager to continue their independence fight against Russia in any arena. Osmayev’s wife Amina Okuyeva, who was with him at the time of the attack, was armed with a pistol and was able to shoot her husband’s attacker four times. Osmayev was seriously wounded but survived.

In these instances, the engineers of the killings do not have business or anti-journalistic motives. The murders are rather an offshoot of the ongoing war between Russia and Ukraine in the eastern Donbas region of Ukraine. The war has increasingly left its cozy confines 350 miles away and is slowly creeping into the calm streets of the capital. The Ukrainian authorities have been powerless to stop the trend. And that might just be the point.

It is this weakness that the perpetrators of the killings—all are almost certainly done by or linked to agents of the Russian government—hope to highlight. With such growing uncertainty, no wonder then that my Ukrainian contacts tell me that nearly anyone who is someone in Kyiv now carries a firearm.