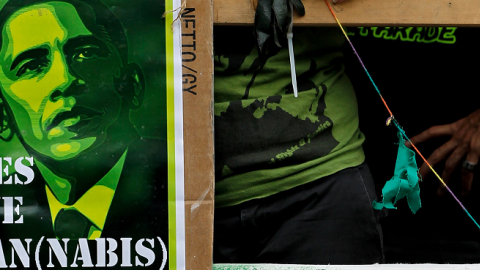 Caption
A young woman next to a satirical portrait of U.S. President Barack Obama while marching in support of the legalization of marijuana on August 7, 2010 in Berlin, Germany.(Sean Gallup/Getty Images)

The Obama administration, driven by the notion that America’s prisons are unjustly filled with first-time marijuana offenders, has condoned marijuana use through an artful blend of inaction and avoidance towards legalization initiatives. Not only has the administration declined to challenge legalization ballot initiatives (or even speak against them during the state campaigns), they have turned a blind eye to recreational marijuana usage by ranking such activities as beneath their “prosecutorial priorities.”

In reality, less than one out of every 200 inmates in a state prison system is incarcerated due to first-time marijuana use or possession. And many of those who are incarcerated have pled down from more serious charges. The fact is most inmates are incarcerated for multiple, non-marijuana drug offenses, often involving trafficking or violence.

Of greater concern, however, is how this prosecutorial neglect will harm the administration’s own efforts to treat substance abuse through the Affordable Care Act.

Legal marijuana undermines social norms against drugs, diminishes perceptions of risk, handcuffs the courts as an instrument in treatment, and makes it less likely that the largest category of dependent drug users in need of treatment will pursue a path to their recovery.

Consider the impact on the Affordable Care Act. Initially hailed as a ‘breakthrough’ for substance abuse treatment, the Act mandates expanded insurance coverage for drug treatment with “parity” requirements (comparable to coverage of other medical conditions) that ACA supporters hope will revolutionize health care for the addicted.

Concerns now beset this provision, especially concerning marijuana, which is the largest cause driving treatment need. While the heaviest drug using age cohort (18-25 year olds) should now be covered until age 26 under their parents’ plan, if the ACA falters in its funding assumptions or in some other manner, federal funding for treatment under the old system would be wholly inadequate to cover expanded treatment need spurred by legal, recreational marijuana.

Legal marijuana also has a perverse impact on getting people needed treatment.

The National Survey on Drug Use and Health discloses the problem. Among the 7.3 million Americans in 2012 who met the criteria for needing treatment (4.3 million of whom were dependent on marijuana), high cost or lack of insurance were offered by some as the reasons that they didn’t actually get the treatment they sought. But these problems were cited by fewer than half of those who didn’t get, for any reason, the treatment they wanted. In fact, the entire category of those who sought treatment but failed to get it represents only 1.7 percent of those who needed it.

In fact, a remarkable 95 percent of those who needed treatment for a drug abuse disorder were not seeking it – that is, they are in denial. No provision of an expanded ACA can help those who do not seek their own recovery. Public policy should be designed to motivate those in need to seek help. Regretfully, widely accessible, socially acceptable marijuana provides no incentive for the dependent to enter recovery; rather, such a permissive environment makes it easier for a person to persist in denial and continue the self-destruction of addiction.

Moreover, the legalization mantra has taken its toll on the views of our youth. Perceptions of risk and norms of disapproval are consequential matters, especially for the young. School surveys show that the perceived risk in smoking marijuana regularly has declined among high school seniors from 80 percent in 1991, to only 39 percent in 2013. Norms of social disapproval have a similarly trended downward, from 80 percent disapproval among 10th graders to only 59 percent over the same time period.

Significantly, there is an inverse relationship between these two measures of youth attitudes and their actual rates of marijuana use. In 1992, when use was at an historic low, perceived risk of even “occasional” marijuana use stood at 40 percent, and past-year use by senior high school students was only 20 percent. But by 2013, those figures had reversed: perceived risk had fallen to only 19 percent, while past year use had soared to 39 percent. As researchers know, when perceived risk and disapproval fall, higher rates of youth use will shortly follow. Legal, socially acceptable marijuana will only accelerate this trend.

There is similar jeopardy for drug courts, which serve as an alternative to incarceration for non-violent drug offenders. There are now more than 2,700 such courts, where offenders are directed to treatment, completion of which can lead to clearing their record, with no resort to prison. They are a huge success; in fact, the criminal justice system today is the largest single source of referral for treatment for drugs like marijuana. But the success of these courts in driving treatment will likely suffer as a consequence of legalization, which weakens the criminal justice system as an adjunct to treatment and recovery.

In the end, the administration is undermining effective responses to real problems by peddling a false narrative regarding incarceration and implementing public health policies at odds with its own objectives.