‘No Man’s Land’ Review: Winning the Right to Heal 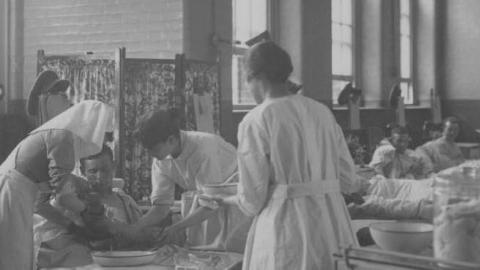 When Britain declared war on Germany in August 1914, politicians set aside their differences to fight the common enemy. So, too, was a truce declared between the sexes in the battle for women’s voting rights.

Among the women who stepped forward to serve their country were two suffragists: Louisa Garrett Anderson, a surgeon, and Flora Murray, an anesthetist. At a time when Britain’s few female doctors were not permitted to treat men, Anderson and Murray established a hospital for wounded soldiers that was staffed by women—doctors, nurses, orderlies, administrators, cleaners.

In “No Man’s Land,” British writer Wendy Moore recounts the story of Endell Street Military Hospital in London and the trailblazing women who worked there. Based on diaries, correspondence and newspaper accounts, it’s an absorbing and powerful narrative of how two determined women used the crisis of war to create an opportunity to accomplish goals that they couldn’t achieve in peacetime.