Fentanyl Is a Public Health and National Security Threat 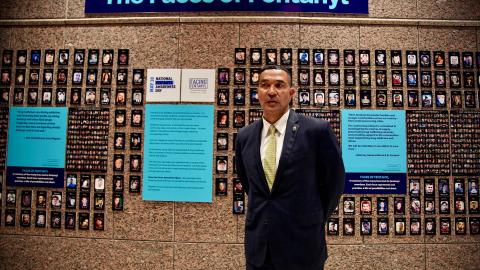 Caption
Ray Donovan, Chief of Operations of the Drug Enforcement Administration, stands in front of "The Faces of Fentanyl" wall, which displays photos of Americans who died of a fentanyl overdose, at the DEA headquarters in Arlington, Virginia, on July 13, 2022. (Agnes Bun/AFP via Getty Images)

“This is like tracking the epidemic by visiting cemeteries. We’re not measuring what’s coming into the country in real-time. We’re not measuring what’s happening with the health consequences and where to put resources to buffer those health consequences. Our drug-control strategy is an embarrassment, and it doesn’t begin to propose a way of reversing this problem.” – Hudson President and CEO John Walters in the Washington Post, December 12, 2022

Nearly 300 overdose deaths occur every day in the United States, largely due to fentanyl, and the opioid crisis cost the economy an estimated $1.5 trillion in 2020. Today meth and cocaine polydrug combinations increasingly use fentanyl, which constitutes at least 66 percent of all drug overdose deaths. In 2021, the Drug Enforcement Agency seized enough counterfeit pills and fentanyl powder to kill the entire US population, but experts believe that the DEA interdicts only a fraction of fentanyl that is moved into the US.

With its cartels, Mexico is the center of gravity for the drug overdose epidemic, but President Andrés Manuel López Obrador has cut cooperation with US drug officials. Meanwhile, the People’s Republic of China supports the cartels with drug distribution, money laundering, human trafficking, and other international crimes. China and other countries ship industrial precursor chemicals to Mexican cartels that finish and distribute mass quantities of methamphetamine and fentanyl products. Reports find that PRC chemists operating inside Mexican drug labs help turn PRC-sourced precursor chemicals into fentanyl. Despite having an effective state security apparatus, Beijing is not cooperating to end the flow of such chemicals because the drug trade helps the PRC, according to former US officials.

Below are some recommendations for how the US should stop the Chinese Communist Party and Mexican cartels from poisoning Americans:

1. Force the CCP to stop producing and exporting fentanyl and precursors for deadly drugs. Congressional action can implement sanctions until the flow of fentanyl stops. For example, Congress can prevent China from accessing US capital, stop PRC businesses from listing on US stock exchanges, and block visas for CCP members and their families. Congress can apply sanctions progressively and reduce them only when overdose deaths stop.

2. Destroy the Mexican cartels. Designate narco-terrorist groups as terrorist threats and apply all counterterror measures against them. Focus intelligence resources to create a real-time strategic and tactical understanding of their operations and dismantle the organizations. Offer to partner with Mexican authorities but make clear that resisting cooperation will lead to unilateral US action.

3. Dismantle the cartel and drug-distribution networks inside the US. Focus federal, state, and local intelligence resources to understand domestic drug trafficking. Treat fentanyl traffickers as “active shooters”—deadly threats to be stopped immediately. Adjust criminal statutes to allow the holding of traffickers at all levels as individuals engaged in premeditated murder. Political leaders will need to explain and mobilize public support for such a change. The adjudication and punishment of such individuals can vary, and rehabilitation should be part of the process. But the goal is to keep them off the streets to break trafficking infrastructure.

4. Treat the addicted, even if treatment does not change the strategic threat. Treatment and mental health care are needed. Most of this care will not occur on a voluntary basis but will instead require an unprecedented expansion of drug and mental health courts and diversion programs. Authorities should arrest the addicted for the crimes they commit and sentence them to supervised detoxification, treatment, and recovery. Criminal records can then be expunged. This process will not be brief, easy, or inexpensive. But treating them will be less expensive than the healthcare, public safety, economic, and generational costs of not treating them. Political leaders need to mobilize public support for such an effort and regularly remind Americans that the death and dying will not stop until the supply of poison ends.

5.Plan and act quickly with an overwhelming response. Americans often lose confidence in national mobilizations without clear and quick achievements. So authorities should frequently release key information—from intelligence to crime and public health statistics—to the public. When this information reveals problems, the government can quickly adjust. Public officials should have clear responsibility for the effort and should be removed if the information shows that they have fallen short.