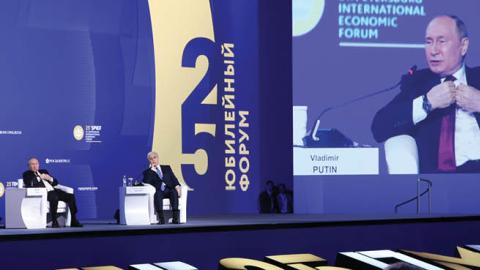 The coordinated sanctions imposed on Russian oil and gas exports by the United States, Europe and their Pacific Rim allies have led to a historic shift in the direction of Russian energy flows. Putin’s main ally, Xi Jinping’s China, already a huge importer of Russian energy supplies, has increased its imports from the Eurasian giant since the onset of the war on Ukraine. Putin had always considered Xi a “tough bargainer,” but the pricing discounts Xi has extracted from a desperate Russia in 2022 add to China’s competitive benefit virtually unlimited access to Russian energy. New research at Hudson Institute gives insight into the price differential Xi has obtained relative to world prices for petroleum. These discounts provide China’s manufacturing juggernaut an opportunity to increase its dominance of important energy-related industries.

Chinese economic data is not the most reliable as the Chinese Communist Party (CCP) bureaucrats often bolster production and other statistics to demonstrate Xi’s historical argument that “the East is rising and the West is declining.” So we must rely on what primary data can be found and extrapolate to get as close as possible to an accurate assessment. Hudson researchers took the last several years of Chinese customs data to chart the volume of imports of Russian oil, then took the total reported value of these imports to calculate a price per barrel for its oil imports. The chart below shows the results going back to 2019. 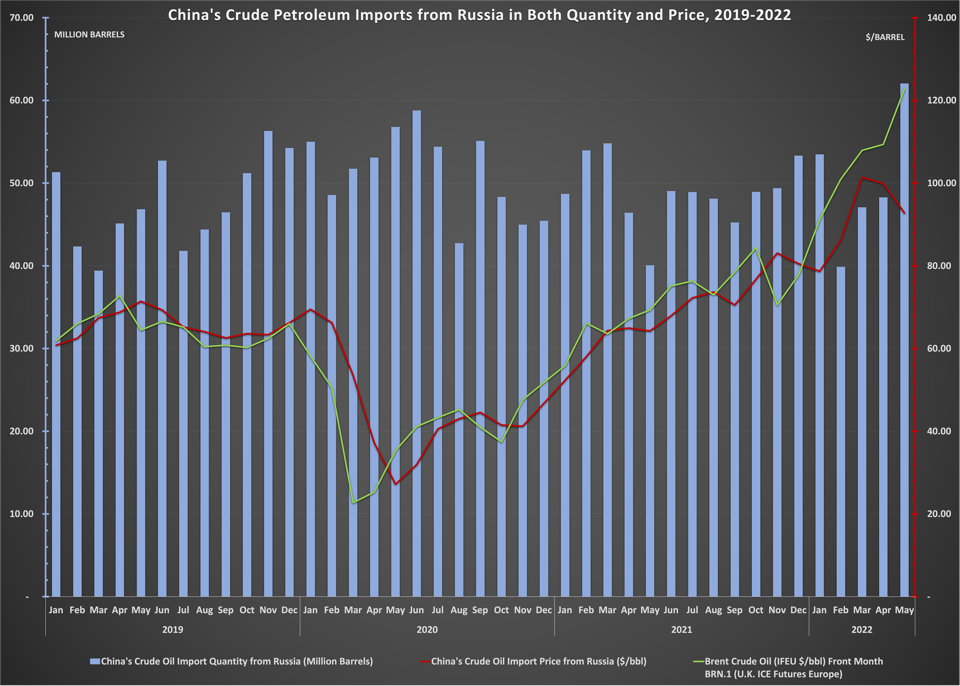 __Source: Hudson Institute based on Wall Street Journal Brent Crude Oil (IFEU $/bbl) Front Month and data from the General Administration of Customs of the People's Republic of China.__

While volumes of imports remained somewhat steady between 2019 and 2021, pricing—probably resulting from a mix of longer-term contracts and spot purchases—was largely consistent with the world benchmark Brent crude price. In 2022 Chinese imports began to rise, reaching a record level in volume in May. But prices began to significantly trail the Brent crude price, as Russia became increasingly concerned with replacing markets closing in the West. The table below details this trend. 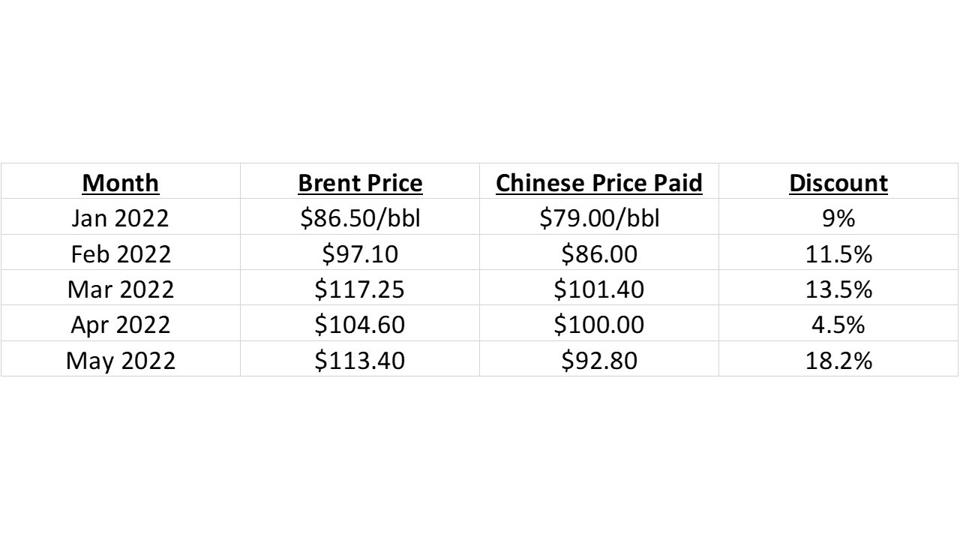 __Source: Hudson Institute based on Wall Street Journal Brent Crude Oil (IFEU $/bbl) Front Month and data from the General Administration of Customs of the People's Republic of China.__

Terms for Chinese purchases have also been loosened by waiving letters of credit and extending repayment terms as required to complete a transaction.

In the natural gas market China has also accelerated plans for increasing imports from Russia, although because of the need for additional transport infrastructure the impact will not be as immediate as for petroleum and refined products.

Russia is already the third largest supplier of gas to China, behind Australia and Turkmenistan, but its proportion will grow significantly as volumes from an existing pipeline are ramped up and when a new pipeline announced by Putin when he visited Xi for the Beijing Olympics comes online. China is also shifting LNG imports away from U.S. and Australian suppliers in favor of Russian exporters. In 2022 alone imports from the U.S. declined by 95%. Much of that LNG has been redirected to Europe, which pays premium prices.

Press reports frequently assert that long-term Chinese contracts for Russian gas are below market prices, but available data is not able to corroborate definitively this assertion. Hudson research using Chinese customs data suggests that China paid Russia about 17% less than its average import price in 2020 and 22% less in 2021 for pipeline gas. Putin’s observation about Xi’s bargaining prowess when they signed the 2022 gas deal (as well as a larger 2014 project deal) supports the widely believed theory about below-market pricing, especially relative to the doubled or tripled prices in 2022 spot markets, which the Europeans are forced to pay to make up for losses of Russian exports and their own sanctions.

Russia is also a major supplier of coal to China, which still accounts for well over half of all its energy consumption. All told 73% of Chinese imports from Russia involve fossil fuels. It is worth noting that the Chinese economy produces more CO2 than does the entire membership of the industrialized nations forming the Organization for Economic Cooperation and Development. The GDP of the latter grouping is more than twice that of China.

In addition to helping keep the Putin war machine afloat, Chinese imports of Russian energy help give its industrial sector even more competitive advantage in world markets than already produced by its heavily subsidized, mercantilist economic model. While European energy prices have tripled or more and face looming shortages of basic supply, and U.S. industry is weakened by higher fuel prices and growing inflation, China now enjoys the broad advantage of consistent supplies and favorable pricing.

One concrete example among many involves the chemicals industry, which employs petroleum and natural gas as both raw material and process heat. New reporting suggests that major European chemicals companies such as BASF are in increasing danger of crisis due both to lack of supply and skyrocketing prices. The electric generation and machinery industries in Europe are also in grave danger for the same reasons. The U.S. chemicals industry has been a world leader as the fracking revolution has produced abundant domestic supplies at favorable prices, but it is now threatened by the growing Chinese industry.

Another problem on the horizon is that the U.S. and Europe have not built any significant new petroleum refining capacity in the last 20-30 years. Shortages in this important part of the industry are a major contributor to politically damaging retail prices of gasoline and other refined products in the Western world. China now has some 30% excess capacity in refining, and could conceivably step into the breach and become a major exporter to the West, as it enjoys major new supplies at lower relative prices from Russia (as well as their mutual ally Iran).

The United States could help its European and Pacific Rim allies, neutralize the growing Chinese opportunity in energy and energy-intensive industries, and contribute to the beleaguered effort of Ukraine to defeat Russian aggression if it treated its oil and gas production industry as part of its modern-day “Arsenal of Democracy” rather than as a pariah that should be slowly phased out. Promoting more domestic production amidst these related crises could contribute to lowering domestic inflation and maintaining industrial competitiveness in the wake of increasing Chinese industrial power which is being fueled by U.S. adversaries in Russia and Iran. This is an acute crisis and the Biden administration and Congress need to address it before Ukraine is overwhelmed and Russian ally China gains more dominance in the industrial sector.