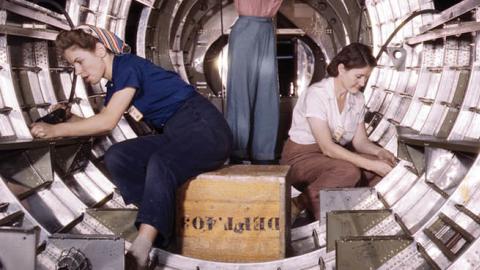 Caption
Women workers install fixtures and assemblies to a tail fuselage section of a B-17 bomber at the Douglas Aircraft Company plant, Long Beach, California in 1942. (Photo by Buyenlarge/Getty Images)

Most Americans, if asked, would probably say that Franklin Roosevelt declared war on Nazi Germany, following the bombing of Pearl Harbor on Dec. 7, 1941. Since we were at war with imperial Japan, the logic would run, we were obliged to be at war with Japan’s Axis ally.

In fact, it was Adolf Hitler who declared war on the United States—four days after Pearl Harbor, on Dec. 11, 1941. By doing so, he managed to bring the full weight of America’s industrial might against him. The war declaration ranks as Hitler’s worst strategic blunder—even worse than his decision to invade the Soviet Union in June 1941, when he pitted the Wehrmacht against an opponent with much greater manpower reserves and strategic depth.

In “Hitler’s American Gamble,” Brendan Simms and Charlie Laderman—historians at the University of Cambridge and King’s College, London, respectively—provide an engaging and insightful account of the forces that shaped Hitler’s fateful decision. The authors note that, far from being an irrational or impulsive gesture, Hitler’s war on America “was a deliberate gamble.” It was driven, in part, by “his geopolitical calculations” and “his assessment of the balance of manpower and matériel.” The decision derived as well, the authors assert, from Hitler’s tortured view of the relations among Britain, the U.S., and, not least, the Jews in both Europe and America.