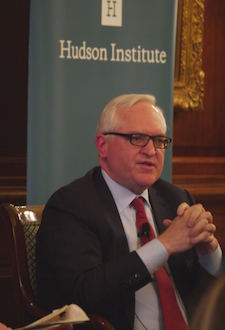 the renowned editorial page editor for the Wall Street Journal, a noted political analyst known, in part, for his hosting of Fox News’ Journal Editorial Report, joined Hudson Senior Vice President Lewis Libby for a conversation on the presidential election and the prospects for U.S. national security in a post-Obama era. An opinion leader with a keen eye on the political scene, Gigot offered his unvarnished analysis of the presidential election and candidates and examined the prospects for our nation’s security, economy, and political culture for the remainder of President Obama’s term.

Virtual Event | US-Japan Relations Under Biden and Suga: The Future of a Critical Alliance

Virtual Event | A Pandemic of Deception: COVID-19 and Disinformation Operations