Skip to main content
Past Event
The Ambassadors Series: The Romanian Presidency and the European Union
Tuesday 7:45 - 9:00AM
Register for Event

The Ambassadors Series: The Romanian Presidency and the European Union 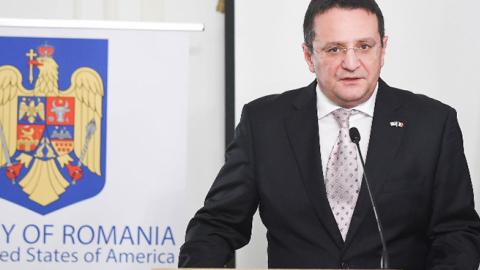 Ambassador of Romania to the United States

Hudson Institute hosted Romanian Ambassador George Maior for a discussion on the Romanian presidency of the European Union. The conversation was moderated by Walter Russell Mead, the Ravenel B. Curry III Distinguished Fellow in Strategy and Statesmanship at Hudson.

Romania has begun its six-month presidency of the Council of the European Union at a critical juncture marked by the looming Brexit deadline, the upcoming European Parliament elections and continued security challenges on its Eastern border. Hudson is pleased to host Ambassador Maior as he discusses the agenda that Romania has set for the EU; its key role in defending the Black Sea and NATO’s eastern flank and in promoting energy security; and the future of the EU post-Brexit.

This event was originally scheduled for February 20 but was postponed due to inclement weather.