Skip to main content
Past Event
Video Event | James A. Baker III’s Washington: A Conversation with Peter Baker and Susan B. Glasser
Thursday 7:00 - 8:00AM

Video Event | James A. Baker III’s Washington: A Conversation with Peter Baker and Susan B. Glasser 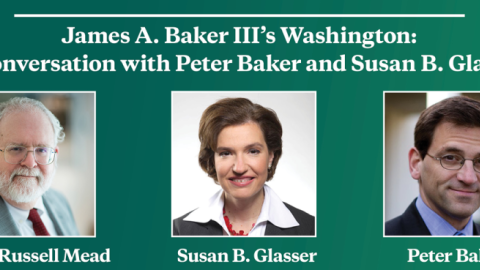 Staff Writer, New Yorker; Coauthor, The Man Who Ran Washington: The Life and Times of James A. Baker III

Join Hudson Institute for a discussion with Peter Baker and Susan B. Glasser, coauthors of the recently published The Man Who Ran Washington: The Life and Times of James A. Baker III. Hudson Institute Distinguished Fellow Walter Russell Mead will moderate the conversation.

Peter Baker is the chief White House correspondent for The New York Times, a political analyst for MSNBC, and author of Days of Fire and The Breach. Susan B. Glasser is a staff writer for The New Yorker and author of its weekly "Letter from Trump's Washington" as well as a CNN global affairs analyst. Their first assignment as a married couple was as Moscow bureau chiefs for The Washington Post, after which they wrote Kremlin Rising.

Their new biography chronicles James Addison Baker III’s political career – over four presidencies and six presidential elections; from campaign manager to White House Chief of Staff to campaign manager again and in cabinet roles as Secretary of the Treasury under Ronald Reagan and Secretary of State under George H. W. Bush. For decades, Baker was known as the man who knew Washington – and the art of politics – better than anyone else.

Baker and Glasser will discuss their new work, James A. Baker III’s legacy and the lessons to be taken from his approach to politics.