Biden Weakened the US on the World Stage. China Is Taking Advantage

What we saw at the G20 summit in Bali was a diminished Biden and a lean and hungry Xi. 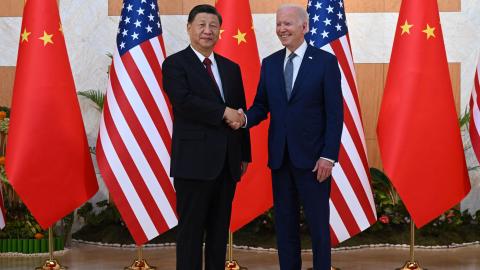 Caption
Joe Biden and Xi Jinping shake hands before meeting on the sidelines of the G20 Summit in Bali, Indonesia, on November 14, 2022. (Saul Loeb/AFP via Getty Images)

At the G-20 summit in Bali, we’ve seen the first face-to-face meeting between the weakest American president since Jimmy Carter, and the toughest and most powerful Chinese leader since Mao. Of course, it was a debacle, with Biden trying to pretend that President Xi Jinping doesn’t hold the trump cards right now in the US–China confrontation. But it didn’t have to be this way.

First came the debacle in Afghanistan in July–August 2021. In just six weeks Biden handed over to our enemy the country where 22,000 Americans were wounded or killed during a two-decade war. This entire operation turned out to be a monument to indecent haste reinforced by incompetence, leaving the rest of the world, including Beijing, to draw the appropriate lesson about the new American president.

Then came the failure to anticipate the Russian invasion of Ukraine, followed by the agonizingly slow response, with the United States belatedly putting weapons into Ukrainian hands that should have been in-country months before — all with no clear plan for what the US would do if Putin overran Ukraine or seized its Black Sea ports. It’s not clear there’s even a plan now, except to let the blood continue to flow.

As for dealing with China, Biden’s Justice Department canceled the Trump-era China Initiative to counter Chinese intelligence operations in the United States, out of concerns that the program might be seen as racist. This decision came even as it turns out Beijing has woven an elaborate espionage network that’s more extensive than anything the Soviets ran during the Cold War — while Wall Street and major US firms continue to invest their dollars and do business in China to sustain the economic engine that fuels the PRC’s military-industrial complex.

Xi can also see American weakness in our dealings with Iran, where no amount of provocation — even sending drones to kill civilians in Ukraine — seems to deter the Biden administration’s determination to get a deal, any deal, over Iran’s nuclear program. What other lesson can China draw, except that it can cross virtually any threshold on the strategic front and expect no worse than resigned indignation from America?

China’s hand, by contrast, has rarely been stronger.

To face this formidable juggernaut, the administration has no clear direction, just a laundry list of aspirations piled up in its recently released National Security Strategy and National Defense Strategy. As with Biden’s meeting with Xi, they can be summed up as offering the forlorn hope that, whatever our differences with China, someday we can work together on climate change.

Perhaps the most ludicrous result of the Bali meeting was the White House’s claim that Biden and Xi agreed to work together on “health and food security,” when Biden was too timid to bring up the origins of Covid or the need to get to the bottom of what happened in those Wuhan labs — for China’s sake as well as ours. Nor did fentanyl, the major killer of young Americans, come up, either.

To Biden’s credit, Taiwan did come up, but the president seems to misunderstand what the goal with regard to the island democracy needs to be. It isn’t to prevent a war over Taiwan. It’s to prevent a Chinese takeover of Taiwan, even at the risk of war.

Biden has signaled before that the United States will act in Taiwan’s defense in case of a Chinese invasion. But it may be that Afghanistan has allowed Xi to take the full measure of the president he now faces. Xi learned there that in the face of serious difficulties, Biden’s response is to knock over the chess board, conceding his opponent the win. That’s what Xi clearly hopes will happen with Taiwan, and with the US–China rivalry in general. With no GOP majority in the Senate and only a thin majority in the House to restrain Biden, Xi has to know he has two more years to consolidate his power and move forward with his plans — up to and including Taiwan.

It’s true we’ve had earlier presidents who put us in tough spots in international relations. Think Gerald Ford after the collapse of Saigon, or Jimmy Carter after the Iran hostage-rescue disaster, or even JFK after the Bay of Pigs and the building of the Berlin Wall. American strength and confidence came back, every time.

But it’s going to take a different president, and a very different strategic mind-set, to get us safely back from the disastrous road to Bali.