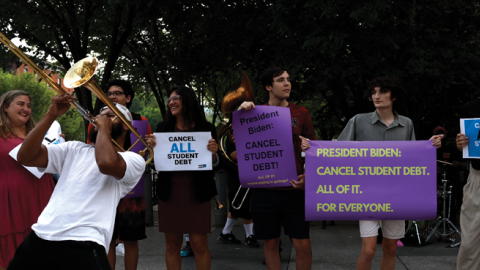 Caption
A brass band plays during a rally outside of the White House to call on Joe Biden to cancel student debt on July 27, 2022, in Washington, DC. (Anna Moneymaker/Getty Images)

President Biden’s decision to forgive up to $20,000 in student loans for certain classes of borrowers won’t fix the underlying problems of American higher education. An educational system that routinely encourages inexperienced young people to assume excessively burdensome debt is morally broken, and repairing it will take more thought and care than went into the politically motivated student-loan decision. Bureaucracies that demonstrate hypersensitivity on issues ranging from pronoun use and trigger warnings to gender-neutral bathrooms while saddling students with tens of thousands of dollars in unpayable debt are exploiting their students, not helping them.

As Americans discuss the need to address issues such as administrative bloat, attacks on intellectual diversity, controversial admissions practices and spiraling tuition costs, we need to remember that the state of the American academy isn’t merely a domestic question. Since the middle of the 19th century, when American missionaries in China and elsewhere began encouraging promising young people to enroll in US universities, the American academy has been a powerful force shaping global perceptions of the US and its engagement with the world.