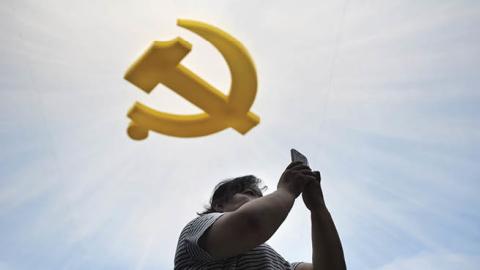 Caption
A visitor uses her phone at the Chinese Military Museum in Beijing. (Wang Zhao/AFP via Getty Images)

* This report assesses China’s comprehensive approach to information power and its implications for the U.S.-Australia alliance. The purpose of the report is threefold: to enlarge alliance awareness of China’s whole-of-society information challenge; highlight critical responses to this challenge from Canberra and Washington; and deepen alliance thinking regarding strategy and policy.

* The scale and scope of China’s information enterprise distinguishes it from other countries. Overt persuasion campaigns and covert influence operations are thoroughly researched, carefully choreographed, and uninhibited by concerns over individual or sovereign rights. Beijing goes beyond the use of information and instead seeks to achieve primacy in discourse power by weaponizing narrative in ways analogous to asymmetric military strategies.

* China uses a distinctive whole-of-society approach to building a dazzling wealth of data and information. Aided by intellectual property theft, forced technology transfers, decades of education training abroad, and other forms of acquiring information, China’s industrial policy goes beyond protectionist measures like subsidies. When Military-Civil Fusion is considered, this development has far more than economic and technological ramifications.

China’s reemergence as a major power is driving economic opportunities while simultaneously raising global security concerns. China is too important and its economy too large for it to be contained. However, blunting its more malign behavior should be a national security priority for the United States and key allies such as Australia. In particular, Beijing’s desire to achieve total information dominance in this area, catching up and overtaking the United States, should concern democratic Five Eyes intelligence-sharing allies and all others who wish to preserve their strategic autonomy. In the context of this study, total information dominance is defined as the ability of an actor to collect data and employ information and digital technology for political, economic, and military objectives with greater success than their rivals. Allowing China to gain information dominance could have far-reaching effects and pose new political, economic, and military risks. This report outlines the scope of China’s total information competition and proposes a starting point for an effective US-Australian response.

China’s national rejuvenation hinges on the power of information. Permeating every aspect of China’s total security strategy, information enables Beijing to harness all policy instruments short of war so as, ideally, to prevail without having to fight, but should fighting become necessary, to win. As it is essential for domestic political stability, the Chinese Communist Party (CCP) believes its survival depends on its having information, making its possession as not only an external priority. Driving foreign intelligence, diplomacy, and influence operations, information contributes to the creation of regional and global order—as well as international standards and institutions and thereby enables China to protect its interests and expand its clout. Since information undergirds economic strength, today’s economic competition hinges on advanced information and communications technology (ICT), artificial intelligence (AI), and quantum computing. Information-centric systems can also aid in securing a favorable military balance, since commercial technologies provide the basis for most military innovations. Amid an ongoing fourth industrial revolution, information plays an increasingly decisive role in prepping the battlefield, fielding superior military power, and, if necessary, winning a conflict in an informatized environment. But China’s dream centers less on winning war than owning the future.

Despite the importance of information power in the twenty-first century, this concept’s scope is large and difficult to grasp in its entirety. Moreover, studies in information power tend to concentrate on discrete issues rather than overall strategic implications, with analyses often balkanized into separate topics related to public diplomacy (influence operations), the Internet (cybersecurity), and military command and control (command, control, communications, computers, intelligence, surveillance, and reconnaissance or C4ISR). This report, which builds on earlier research, assesses China’s comprehensive approach to information power and this approach’s implications for the US-Australia alliance. Therefore, this report’s purposes are threefold:

1. Enlarge alliance awareness of China’s whole-of-society information challenge;
2. Highlight critical responses to this challenge from Canberra and Washington; and
3. Deepen alliance thinking regarding strategy and policy.

Because of the breadth of the impact on the alliance caused by China’s information power, this report underscores selected challenges and responses and is not encyclopedic. However, Australia and the United States would benefit from broad consideration of China’s growing information challenge and how the two allies can improve their ability to compete, be resilient, and defend against information-related threats.

At the outset, China’s goals and its capabilities do not necessarily match. Aspiring to total information dominance is not the same as achieving it. Beijing faces nearly insurmountable obstacles in seeking to accomplish all of its technological and policy ambitions. Many of China’s aspirations center on catching up with the United States, which, along with its allies, is not idle in this regard. Also, China’s focus on information reflects the CCP leadership’s extensive vulnerabilities, both real and perceived. Even if China achieves some of its goals of information dominance, that dominance does not necessarily translate into clear-cut victory. The information domain is vast and always contested, and there will always be a countervailing argument or lingering doubt about the actual “balance of information power.”

Notwithstanding these caveats, the threat from China’s pursuit of information dominance is palpable and mounting. As China swiftly emerges as an information superpower, consider the types of behavior that have been or are still underway:

* Use of cyber espionage and other means of intellectual property theft to close the technological gap with more advanced nations;

* Buffeting Australia and other countries with caustic, “wolf warrior” diplomacy to reinforce coercive economic pressure designed to bring about their acquiescence to Beijing’s policies;

* Hoovering big data and creation of the algorithmic means to influence opinions, interfere with decision-making, and build foreknowledge;

* Conducting global influence operations with Chinese narratives that depict China’s inexorable rise and America’s inevitable decline intended to divide democratic alliances and sap the political will to respond to China’s assertiveness; and

* In advance of a crisis, gaining access to information systems in ways that could embolden China’s policymakers and possibly pre-determine the outcome.

In short, even though China is “not hell-bent on world domination,” its behavior of capturing greater information power at the expense of the United States and its allies is worrisome, as the PRC leverages information power to maximize its influence and control over an increasingly contested Indo-Pacific region. The stakes are high, and past responses have been insufficient to keep pace with China’s information technology and power juggernaut.

Examining the integrated components of China’s use of information power can aid in analyzing the challenge, and so this study dissects China’s use of information power into three broad categories: 1) diplomatic and political information; 2) economic and technological information; and 3) security and military. While connections across categories lead to some duplication, the binning of China’s actions into one or more of these groups highlights Beijing’s various interests and will help identify effective alliance responses. In addition, the recommendations provided in the final section of the report provide a specific agenda for the US-Australia alliance response.

Chapter 2 analyzes three related facets of China’s approach to diplomatic and political information—persuasion, decentralized and covert influence operations, and discourse power. Chapter 3, which focuses on economic and technological elements of China's bid for information dominance, concentrates on Beijing’s industrial party-state policies such as Made in China 2025, Military-Civil Fusion, and Vision 2035. Chapter 4 considers China’s quest for security and military information through the prism of its total security paradigm, exploitation of gray zone competition below the threshold of traditional conflict, and system-versus-system warfare. Chapter 5 places an alliance response within the broader context of a democratic grand strategy comprised of collective strength, high-technology competitiveness, international leadership, offensive information operations, and collaborative innovation. Chapter 6 offers an alliance information agenda with thirteen actionable recommendations. As daunting as China’s gambit for information dominance is, there are numerous ways to overcome it.