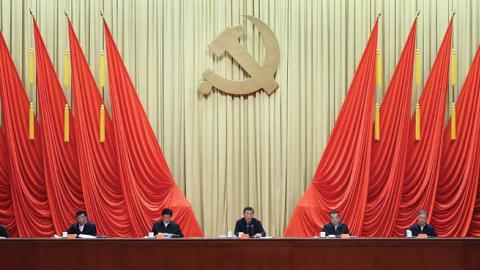 Caption
Xi Jinping addresses the opening of a study session at the Party School of the CPC Central Committee attended by provincial and ministerial-level officials, Jan. 11, 2022. (Photo by Wang Ye/Xinhua via Getty Images)

Material power is relatively easy to understand and quantify. Much less attention is given to nonmaterial power, which is admittedly more nebulous and difficult to assess. Even so, if power is broadly defined as the capacity to exercise or impose one’s will over another, then nonmaterial forms of power need to be taken seriously. This means understanding them, increasing one’s capacity to operationalize and exercise them, and institutionalizing their use to achieve national and security interests. The issue of nonmaterial power (especially information and influence operations, which will fall under the term political warfare) is arising because these forms of power have been taken for granted or have been largely ignored by the advanced democracies. Beijing is exploiting our complacency. There is already a rich and growing body of literature on the various information, influence, and institutional resources and activities of the Chinese Communist Party (CCP). This brief does not seek to reproduce the excellent work already out there.

Instead, it will make the following point: