Coronavirus and the Clash of Civilizations 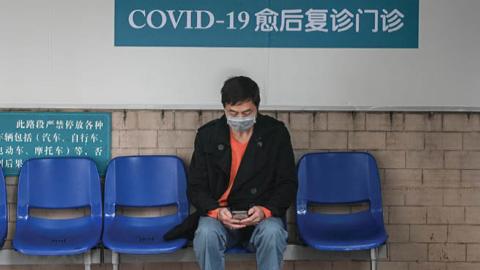 Caption
A cured coronavirus patient waits outside an outpatient department of Guangdong Second Provincial General Hospital on March 4, 2020 in Guangzhou, Guangdong Province of China. The hospital sets up the department especially for cured patients to better moni

I spent the last two months traveling through Asia, all the way from Pakistan to the Philippines, with stops in India, Nepal, Singapore, Malaysia, and Vietnam. These were the months when the coronavirus epidemic grew from a faint echo in our daily news feed into what will likely become the most important story of our lifetimes, already shaping up to be the biggest story in Google trends history.

What most impressed me in my travels was the seriousness with which the outbreak is taken all over Asia. In Europe and America, at least among the political class, the coronavirus has been mostly a matter for jokes and general levity, although in countries such as Italy that mood has now changed and taken a dramatic turn.

Singapore, where a vast and methodic system has been put in place to deal with the emergency, relies heavily on technology, but citizens are asked to do their part. In Vietnam and the Philippines, the response has been less methodical, but the anxiety is evident everywhere. In Nepal and India, even the poorest rickshaw driver and the most otherworldly pilgrim have made drastic changes to their behavior.

In some countries, including China, the SARS outbreak in 2003 was a formative experience. For many it felt like a close call. Even if the number of victims was limited, the impact on the regional economy was severe, and everyone had to wonder: What if this happens again, with a more contagious virus? At peak shedding, scientists say, people with coronavirus are emitting more than 1,000 times more virus than was emitted during peak shedding of the SARS infection. The SARS virus sits deep in your lungs. The coronavirus is in your throat, ready to spread.

The outbreak has exposed other divides. As I traveled in increasingly empty planes, one thought kept returning: How notable that we are all together in this, and yet every society seems to deal with the epidemic in its own distinctive way. One of the main divides was between the developed and the developing world. It explained the seriousness in Asia. If poverty and disease are a daily presence or at most two or three generations behind you, you are predisposed to accept that your world can suddenly collapse. The question that Americans and Europeans ask themselves — How was this allowed to happen? — makes less sense than the question of how to survive and how to protect your loved ones.

The subtle changes of political climate and mores that political thinkers used to write about are suddenly very relevant. I wondered if social mores explained why some countries and not others became hotspots of the infection. As the news from Wuhan started to arrive, I thought of my previous visits to the city: the crowded restaurants serving crayfish, the long meals around the hotpot, the communal living, and the chaos of the wholesale seafood market. But it was not just China. Southern Europeans greet themselves with one or two kisses. Iranians spend time crowded together during daily prayer. Perhaps these were factors, but then the response was no less colored by cultural differences.

At present the most hopeful news about our ability to defeat the epidemic comes from what could roughly be called the Confucian cosmopolis. Singapore flirted with disaster at the beginning but quickly recovered. Vietnam has shown a remarkable ability to contain the spread, and South Korea has proven capable of conducting as many as 10,000 tests per day and has built testing clinics that can detect the coronavirus cases in just ten minutes. Do these facts illustrate the benefits of a moral system that emphasizes duties before rights and places high value on the propriety of customs, measures, and rules as defined by the larger community?

Just yesterday I received an email from a Chinese university informing me that a conference planned for May will still go ahead. The author of the message took the opportunity to make the point that, by the time the conference takes place, China will be much safer than Europe or America. He then concluded with the pronouncement that the coronavirus has shown the Chinese model to be superior to the Western one. Chinese authorities complain that the epidemic has been politicized by those wanting to score points against the regime in China, but they are doing exactly the same. Coming at a time of great-power rivalry, the epidemic has provided the perfect backdrop for a renewed clash of civilizations.

For the past few years the consensus view that China would slowly adopt Western political values has been replaced by the realization that the Chinese Communist Party is firmly committed to an alternative model and is in fact trying to export it worldwide. We knew that a generalized race or competition between alternative models had started, but it was never clear what the background for such a competition would be. Would the clash take place within the global trade and financial system, which was of course built according to Western rules and principles? That made many in the United States sure that the battle could be decisively won.

The coronavirus has provided a somewhat different answer to the question. The contemporary clash of civilizations, like similar clashes in the past, was never an intellectual war, a war of ideas. Ultimately the victors are those who master technology and acquire a higher level of control over natural forces. And the backdrop is not fixed or even stable. The battle will be fought over shifting sands as new threats emerge — climate change and pandemics, first of all — as new technologies are developed, and as changes in the global distribution of power erode the existing system.

The United States now faces a much more delicate and much more dangerous threat than those posed by Chinese manufacturing prowess or key digital technologies. The coronavirus upsets expectations and exposes weaknesses you might not know about. In a way it forces America to compete with China on neutral ground, that of a new and unexpected technological and political threat to social stability.

Consider this: In China tens of million had been put on lockdown and three new hospitals were built by the time the country reached the infection statistics that the United States has now. And still the reaction was universally deemed to have come too late. What gives Americans confidence that they are in a better position than China was back then? The only explanation I have heard is that America and China have different political values, but surely to expect that your values can defend you from the world is what defines a religious rather than a scientific approach to life.

This is where it might be apt to return to the point above about seriousness. So far the most memorable image to come out of the United States during the epidemic is not that of a new hospital but the stunt orchestrated by Representative Matt Gaetz (R., Fla.), who mocked coronavirus concerns by wearing a giant gas mask onto the House floor to vote for an emergency spending bill to fight the virus. People in China are taking notice and stepping up their propaganda campaign. The main message? Can you trust America to do the right thing during an emergency?

Over the past few months, in several conversations in Silicon Valley, I have tried to argue that the United States has forgotten an important lesson about the nature of a modern society. Technology is a collective endeavor. You cannot introduce new, revolutionary technologies through individual creativity alone. Institutions and regulation need to change, social habits need to be transformed, the social landscape as a whole must be transformed if we are to reap the full benefits of new technologies. That means that society needs to move together in some sense. An important lesson about technology — it explains the stagnation described by Tyler Cowen and Peter Thiel — may turn out to be just as relevant when societies try to respond to the coronavirus epidemic. Can America move as a single organism? Has the collective muscle atrophied to the point that it no longer works as needed?

My answer is not straightforward because I am convinced we are still missing what is truly distinctive about American society. It does not seem that incompetence alone can explain the lack of an appropriate response from American authorities. There is an idea behind it.

For all the talk about European values, Italy seems to have embraced large parts of the Chinese response to the coronavirus. Movement in the country is now severely restricted, after measures exceeding anything ever tried in a European country since Word War II. Travel is allowed only for “urgent, verifiable work situations and emergencies or health reasons.” To encourage people to stay in, bars and restaurants are allowed to open only during daytime, and only if it is possible to keep a distance of at least a meter between customers. All museums and cultural venues are closed, as well as nightclubs, cinemas, theaters, and casinos, which have been shut since the weekend.

In the way they place social stability above everything else, China and Italy are discovering, perhaps to their surprise, a shared cultural substratum. The United States seems to be moving in a different direction. President Trump is taking the enormous gamble of assuming that Americans are different in that they can deal with higher levels of risk. His plan is to manage the outbreak rather than stop it. To be reconciled with society as a field of danger and contradictions and to abandon all plans to improve it might reveal a deeply conservative, even an atavistic, disposition, but perhaps Americans no longer think of society as a home. In that classic American genre, the western, the town does not provide a home for the cowboy — it is not the safe and conveniently anonymous field of experience a European city promises the romantic flaneur — but is rather a hostile place, full of conflict and danger.

For the time being, China seems to be ahead in the geopolitical game. After some initial moments of hesitation, the Chinese state has shown that it can react on a gigantic scale and obtain high levels of allegiance from its citizens. All 14 shelter hospitals in Wuhan have been closed as the number of infections in the city continues to drop. But is the game over? To say that would be to make the same mistake of those commentators who argued two months ago that the Chinese Communist Party could not survive the coronavirus.

Many questions remain unanswered. China may be very close to stopping the epidemic, but it did so under extreme conditions, and it has set up a precedent for the future. Can it afford to lift the restrictions on social life? What happens if the virus flares up again? If the precedent means that the same restrictions will be imposed anew, the Chinese economy will never recover.

One way or another, the world is bound to look very different at the other end of the tunnel we have just entered.