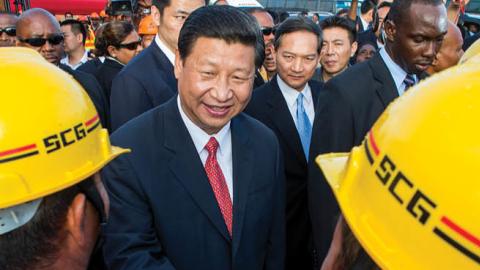 Since Deng Xiaoping changed the trajectory of Chinese economic policy in 1978, the People’s Republic of China (PRC) has amassed an impressive record of economic growth. Many economists and political analysts, however, have come to question whether the top-down, mercantilist economic system in the PRC is sustainable in the medium to long term.

This report explores the long-term structural and short-term economic problems in contemporary China, and in particular considers whether the Xi Jinping regime can avoid a financial crisis and effectively manage a transition to a stable new equilibrium. Structural issues include a looming downturn in the population and in the workforce; associated problems with an underdeveloped and underfinanced social safety and welfare net; income and regional inequality; environmental degradation; and domestic shortages of raw materials, agricultural production, and energy resources. The acute economic problems analyzed in the paper are a real estate bubble, the accumulation of dangerous levels of debt, dependence on external markets and financing, a difficult transition to a more consumer-oriented and less investment-driven economy, a crackdown on dynamic digital and financial sectors, a return to dominance of low-productivity state-owned enterprises and manufacturing firms, and weak governance from an increasingly authoritarian and unaccountable regime. Many of these acute issues result from Xi’s changes in policy since 2013. Xi’s turn toward greater economic self-reliance while maintaining mercantilist trade relations signals an effective decoupling from the US and allied economies.

Some historical examples of bubble economies and financial crises are discussed as possible analogies to the current situation in China. One conclusion is that the Middle Kingdom will see a much slower-growing economy, which makes addressing the structural issues much more difficult. Inability or lack of determination to address the large array of issues may also undermine the political legitimacy of the current regime, which has been buttressed since 1978 by a rapid growth model based on debt, real estate, and investment, including infrastructure.

The concluding section of this report offers policy tools that the United States and its allies could deploy to induce China to be a more responsible stakeholder in the world economy and a more reliable contributor to global sustainability. The tools considered in the study include trade policy and export controls, expanded oversight of foreign investment (both direct and portfolio investment), cooperation with allies on China policy, and defense-related sanctions. The paper also suggests that deployment of these tools could be a factor in weakening China’s economy as well as a means to convince its leadership to pursue less mercantilist and authoritarian global strategies, which are harmful to the US economy and to global stability.