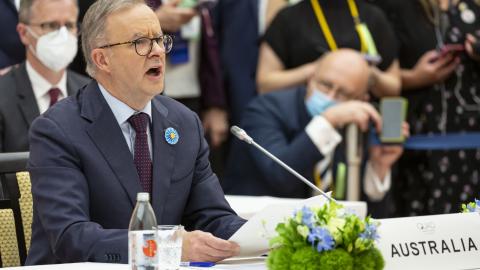 Anthony Albanese has departed Australia for a week of regional and global summitry. There is great interest in whether a formal meeting with China’s Xi Jinping will finally take place or if Australia will be shunned again.

A face-to-face meeting with the leader of our largest trading partner is no small matter. Assuming one occurs, and even if there is a promise to reverse coercive trade measures against us, the negative underlying dynamics of the Australia-China relationship doesn’t change because Xi’s plan to create a neighbourhood of submissive states hasn’t changed.

What has received less attention but has more impact than a meeting with Xi is whether Australia can work better with Southeast Asia to prevent it from becoming a Sino-dominated and compliant subregion. That, and not a bilateral meeting with Xi, is the more important reason Albanese will be in Cambodia, Indonesia and Thailand this week.

Beijing knows the future of the Indo-Pacific will be determined by the extent to which the commercially vibrant maritime trading economies can be persuaded or compelled to fall meekly in line with Chinese plans. Because of Beijing’s belligerence and bad faith, determination in Japan, Taiwan and even South Korea to prevent Chinese hegemony is strong and growing.

This makes Southeast Asia the pivotal subregion. It is the soft underbelly in the sense that it is these countries that are most susceptible to Chinese coercion, seduction and influence.

This brings us to the appointment of former Macquarie Group head Nicholas Moore as special envoy for Southeast Asia with the mission to accelerate trade and investment with this region. One can see why someone with Moore’s background was nominated. Deepening the economic relationship is important. While the Association of East Asian Nations (the 10 Southeast Asian member states and soon to be 11 with East Timor) sits behind only China and the EU as our largest two-way trading partner, the investment relationship remains underdone. The commercial opportunities are obvious.

The fastest growth of middle classes in the next decade could occur in economies such as Vietnam, Malaysia and Indonesia. Southeast Asia will benefit from some of the supply chains exiting China because of geopolitical tensions and the more oppressive environment under Xi. This means the substance and optics of appointing a former business leader to this role makes sense.

Even so, every economic action in the region these days has an unavoidable geopolitical underlay and achieving our broader interests in Southeast Asia means more than just doing business whenever there is money to be made. Consider a common exhortation among many Southeast Asian nations that they must not be forced to choose between China and other nations. This is a misleading declaration that should be challenged because some of these nations are constantly making decisions in the name of maximising short-term gains without regard to longer-term risks.

Consider the support some are offering for China’s bid to join the Comprehensive and Progressive Agreement for Trans-Pacific Partnership, the trading bloc that seeks to advance liberal economic rules and higher economic standards. True, Chinese ascension would lead to better access to its domestic economy for other members and lower transaction costs of doing business with Chinese firms.

At the same time, Beijing is already using state resources and other illegitimate means to ensure it becomes an increasingly dominant supplier to the region when it comes to adding more value in less sophisticated sectors or emerging as the only option for smaller states when it comes to advanced, hi-tech sectors.

Southeast Asian states know Chinese membership in the CPTPP will help permanently entrench Chinese advantages in those sectors that will determine the winners and losers of economic activity in the future at the expense of all others.

In another context, the ostensible refusal of some Southeast Asian states to buy into the hi-tech decoupling between China and the West is a choice with enormous consequences because it will mean they will be tempted to choose the default option of the lower-cost Chinese supplier.

Once reliant on the Chinese state-controlled hi-tech ecosystem, they are captured as leaving is prohibitive from a cost perspective or technically impossible. This is Beijing’s plan and we all know it. The decision nevertheless to overlook Chinese Communist Party motivations and allow the latter’s standards to be entrenched outside China is a clear choice with impacts for their nations and beyond.

Albanese and envoys such as Moore have their work cut out for them. We cannot directly stop other nations from making poor decisions for immediate or short-term gain.

But we should not create diplomatic cover for doing so or enable poor choices by support­ing projects and institutions that entrench Chinese ad­van­­tages. We can impose oppor­tunity costs indirectly by prior­itising agreements and deals with those nations choosing to take a broader view of their responsibilities through avoiding Chinese capture and the advance of authoritarian rules and standards.

China’s approach is to reduce the individual and collective agency and resolve of Southeast Asian nations, thereby rendering them submissive and compliant. Our purpose is the opposite – to offer alternatives and work with those nations seeking to make proactive and wise choices for the sake of their longer-term interests. This begins with abandoning the delusion that important decisions need not be made.