Global Free Trade Is in Crisis 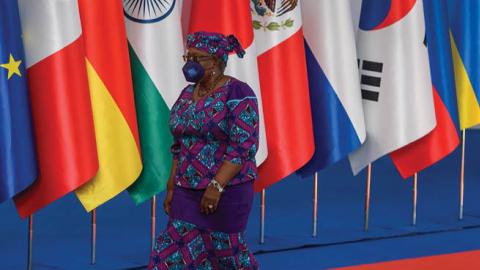 Caption
Director-General of the World Trade Organization (WTO) Ngozi Okonjo-Iweala arrives for the welcome ceremony on the first day of the Rome G20 summit, on October 30, 2021 in Rome, Italy. (Photo by Antonio Masiello/Getty Images)

As diplomats prepare for December’s 110-government virtual Summit for Democracy, there is much hand-wringing over democracy’s global retreat. That democratic recession is real, but another fundamental element of the liberal world order is in even more trouble.

Free trade is as critical as democracy to the health of world order, but suspicion of free trade is an attitude that unites Biden Democrats and Trump populists. In its latest Trumpian trade move, last week the Biden administration doubled tariffs on Canadian lumber.

Meanwhile, Omicron-related Covid fears led the World Trade Organization to cancel its ministerial meeting in Geneva. With the WTO losing both efficacy and legitimacy, trade liberalization, next to American military power the single most important force binding the nations of the world into a liberal order, is facing its most significant challenge since the Great Depression.

Free trade matters. It has done vastly more than all the world’s foreign-aid bureaucrats to raise living standards and increase opportunities for people in emerging economies. And that is not all. By giving both rich and poor nations a common interest in the peace and stability of the global system, free trade does more than NGOs and activists to promote peace. Billions of people around the world have seen dramatic increases in their living standards thanks to America’s trade leadership. That prosperity is what makes so many people in so many places willing to accept a world system that gives America a privileged and unique role.