A Hard-Power, Twentieth Century History of the Continent That Will Make or Break the Twenty-First

A review of Ronald H. Spector's A Continent Erupts: Decolonization, Civil War, and a Massacre in Postwar Asia, 1945-1955 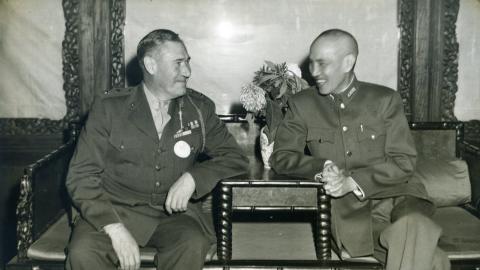 As the rise of China pulls the world’s attention to East Asia, Americans are catching up on a relatively unfamiliar part of the world. Although Americans have been seeking their fortunes in Asia since the Empress of China sailed out of New York Harbor in 1784, the country as a whole is unfamiliar with the Indo-Pacific. For Americans to succeed in the 21st century, this will have to change.

Many of the stories that fill today’s headlines are the results of events described in Ronald Spector’s A Continent Erupts, which covers the wars that broke out in Asia after V-J Day. Unlike in Europe, where most of the major violence ceased after the Axis powers surrendered, Japan’s defeat marked the end of only one phase of the fighting. As Spector puts it, “East and Southeast Asia was, in fact, the most violent region of the globe during the decade following the end of World War II.”

To the extent that Americans are familiar with these conflicts, they often think they are a direct result of the Cold War. Although some groups sought to replace one European imposition (colonialism) with another (communism), Spector argues that “instead of being simply wars of liberation or ideological contests, most of the conflicts in postwar Asia soon took on the character of civil wars.” Many of the combatants discovered the virtues of freedom or communism at approximately the same time they discovered that the United States and the Soviet Union had funds and weapons to spare. To Spector, “these apparently black-and-white struggles may be more accurately viewed in various shades of Technicolor.”

Americans were reluctant to intervene in these conflicts. They had granted independence to the Philippines and wanted the Europeans to follow their example. As they saw it, ending European colonialism would be a moral victory and would free up funds for more useful endeavors, such as rebuilding a devastated Europe and reducing communism’s appeal there.

They were most successful in Indonesia. The Indonesian Republic declared independence two days after the Japanese surrendered, the Dutch launched a “police action” to “restore order,” and Indonesian guerilla fighters ensured that order was not restored. The two sides signed a ceasefire on the USS Renville, and Americans were impressed by Indonesian President Sukarno’s reasonableness and his crackdowns on communist-affiliated rebels.

When the Dutch launched a surprise attack on the Indonesian Republic, Sukarno decided to rally international opinion by surrendering without a fight. Surprisingly, this worked: Asian and European countries flooded the Hague with protests, and a group of American senators threatened to halt aid to the Netherlands. Within months, the Dutch caved. The Indonesian government’s strategy paid off, although it embittered the army and the Islamist rebels who had continued fighting in the hills. This led to further problems for an independent Indonesia that cascade (or at least echo) into the present.

American sympathies for decolonizing nationalists and growing concerns about communism should have made the nationalist Kuomintang a natural partner for the US. This was not the case. As soon as Japan surrendered, the American military occupied key parts of China and transported Kuomintang forces to other areas to forestall the communists. However, Harry Truman did not believe that nationalist leader Chiang Kai-shek could unify China, so he sent George Marshall to China to hammer out a settlement between Chiang and Mao’s communists. Marshall’s cajoling, aid cuts, and arms embargo failed to rein in Chiang, so he resigned in early 1947.

Shortly after Marshall left, Washington’s worst fears came true. In 1946, Chiang’s forces forced the communists to retreat, particularly in resource-rich Manchuria in the far northeast. The Kuomintang could only raise enough taxes to pay about a third of its expenses, however, so it printed money to make ends meet. As a result, inflation skyrocketed and the economy tanked. Chiang gambled on big offensives in 1947 to win the war but was unable to stop a communist counterattack.

The nationalists lost ground as entire units defected to the communists, and Chiang’s forces were eventually driven from the mainland to Taiwan. After having grown accustomed to Japan’s harsh but efficient colonial government, many Taiwanese protested the corrupt nationalist forces that occupied their island after the war. The nationalists shot many of them in the February 28 Incident that remains a flashpoint in Taiwanese politics to this day.

Mao’s victory sparked one of the bitterest American political controversies of the Cold War, the “who lost China?” debate. The Truman administration concluded early on that Chiang was hopeless and that any aid sent to China would be wasted. This line of reasoning did not impress the Republicans, who questioned why containing communism was a vital national interest only in Europe and why so many China hands appeared, to them at least, to have communist (or Communist Party) sympathies. Once the House Republicans threatened to withhold aid to Europe until Chiang received assistance, Truman caved, but the political firestorm haunted a generation of Democratic politicians.

The consequences of defeat spread beyond China. In January 1950, Secretary of State Dean Acheson gave a speech that excluded Korea and Taiwan from America’s defense perimeter in Asia. This speech contributed to Joseph Stalin’s decision to allow North Korea’s Kim Il Sung to invade South Korea after getting approval from Mao, to whom Stalin had delegated the advance of communism in Asia. The South Korean forces had nearly defeated a communist insurgency by the time the first Soviet-supplied tanks crossed the border, but they were no match for a conventional army.

In Korea, American forces paid in blood for America’s postwar defense drawdown. American units such as Task Force Smith did not have adequate weapons, and these unprepared units were driven back to a sliver of the Korean Peninsula near Pusan. The Soviets were boycotting the United Nations Security Council, so the US rammed through a resolution authorizing UN forces to defend South Korea. As these multinational forces reached the battlefield, Douglas MacArthur staged an ambitious amphibious landing near Incheon that forced the North Koreans into a rapid retreat of their own. The Americans had nearly reached the border with China when Mao’s forces entered the war and pushed the front lines back to the 38th parallel, the de facto border between North and South Korea, where desultory fighting continued until the 1953 ceasefire.

The last war to die down was in Vietnam. Chiang’s forces and British troops occupied much of Vietnam after V-J Day, and the Viet Minh, a communist front organization, mostly cooperated with them while ruthlessly crushing its Vietnamese rivals. By the time the French forces arrived, they had to negotiate with the Viet Minh to even enter Vietnamese cities. Once the fighting began, French forces, many of whom came from colonies in Southeast Asia and Africa, could barely hold their own against the Viet Minh.

The Americans wanted the French out and the communists down. They hoped that Japan would rebuild economically through exports to Southeast Asia, so they saw a communist defeat as vital for Cold War success in Asia. Unfortunately, France’s determination to keep its colonies harmed the war effort. For example, France prevented Americans from training Vietnamese troops, even though American-trained forces in Korea performed well. French public opinion had already turned decisively against the war by the time French paratroopers landed in Dien Bien Phu. As the Viet Minh gradually overran the paratroopers, Washington turned down increasingly desperate French requests for intervention. After that defeat, France’s withdrawal was a foregone conclusion.

Spector is an accomplished historian of Asian conflicts, and it shows. He adroitly compares the various militaries’ performance and reveals how smaller legacies from World War II, such as the Japanese deserters who trained various militias in Asia, had major effects on these wars. Nevertheless, his decision to exclude Britain’s successful counterinsurgency in Malaysia was surprising: That war ended after the 1955 cutoff date for his book, but the US military drew from it heavily in Iraq and Afghanistan.

The other quibble to a grand and successful work is his occasional tendency to take inconsistent approaches in evaluating historical controversies. For example, he writes that Acheson’s speech “appeared to exclude both South Korea and Taiwan” from American defense commitments. That was no mere appearance—it was the point of the speech. While Spector gives Acheson’s bungling a favorable interpretation, he takes some Eisenhower statements more or less at face value. As the French begged for American airstrikes to stave off defeat in Vietnam, Eisenhower kept adding unrealistic conditions. It is more likely that Eisenhower, who from his wartime service understood air power thoroughly, knew that bombing runs could not turn the tide and preferred for others to tell the French no, than that he made a mistake.

Asia’s decolonization was one of the most important developments of the 20th century—and one of the most underappreciated today. American forces continue to be deployed to defend South Korea, and the Chinese communists are trying to get across the Taiwan Strait. Not so long ago, this region was the most violent in the world. American forces were unprepared when the fighting started, and many died as a result. The communists are on the prowl, and we must not get caught out again. Step one is paying attention to the history, and reading this book is an excellent way to begin.