Iran's Malign Meddling Is Only Going to Get Worse 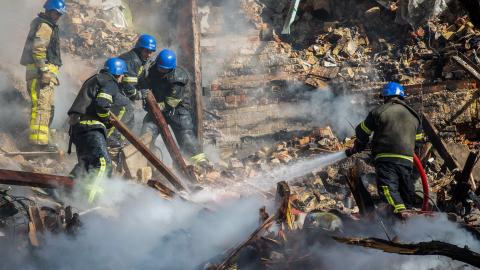 Caption
Ukrainian rescuers work at the site of a residential building destroyed by a Russian drone, which local authorities believe to be Iranian-made Shahed-136, in central Kyiv on October 17, 2022. (Oleksii Chumachenko/SOPA Images/LightRocket via Getty Images)

Day after day major protests continue to rock cities across Iran. Even though the regime in Tehran has its hands full dealing with these daily demonstrations, it has not stopped exporting instability and terrorism around the region. If anything, Iran has stepped up its nefarious activities abroad since the nationwide protests started almost 50 days ago. A quick glance at the past week alone offers three examples.

First, it was reported last week that Saudi officials had told their American counterparts that Iran was planning to launch an air attack against targets in Saudi Arabia and in northern Iraq, including US military bases in the region. Of course, Iranian drone and missile attacks are nothing new. In fact, there have been numerous attacks, both by Iran and their proxies, across the region against targets in Iraq, Syria, Saudi Arabia and the UAE. So an attack targeting Saudi Arabia, northern Iraq, and US troops would be straight out of the Iranian playbook.

However, what makes this latest threat different is that Iranian officials have been stepping up their rhetoric toward Saudi Arabia — including direct threats to the Kingdom. Tehran has blamed Saudi Arabia, the US, and Israel for the protests across Iran. In particular, Tehran has been outspoken about a Farsi-language satellite news channel based in London called Iran International, which is thought to be the most watched independent news channel in Iran. Many in Tehran believe that the news channel receives funding from neighboring Arab countries — although this has never been confirmed. The impact of Iran International is taken so seriously that the commander in chief of the Islamic Revolutionary Guard Corps, Maj. Gen. Hossein Salami, threatened Saudi Arabia by saying during a military exercise: “This is our last warning, because you are interfering in our internal affairs through these media.”

Second, the government of Azerbaijan said last week that it had broken up an Iranian-trained terrorist cell. This is a major escalation considering that relations between Baku and Tehran have been tense in recent months. According to the official announcement from the Azerbaijani government, 19 of its citizens were recruited by “Iranian special services” and brought to Syria and Iran to receive training. The long-term goal was for these trained fighters to create instability inside Azerbaijan.

This comes at a difficult time in Iranian-Azerbaijani relations. In recent weeks, Iran conducted confrontational military exercises along its northern border with Azerbaijan. In response, Azerbaijan held its own military exercise with its special forces near the border with Iran. Iran has long been suspicious of Azerbaijan’s close relationship with Israel. Meanwhile, Azerbaijan has concerns about the cozy relationship between Iran and Armenia. There has also been a notable change in rhetoric coming from both Tehran and Baku. Statements and criticism that would have normally been reserved for private channels are now being made public.

Finally, Iran’s export of instability extends beyond the Middle East and into eastern Europe. In recent weeks, hundreds of Iranian built Shahed-136 “suicide drones” have been used to target Ukraine’s civilian infrastructure. Although Ukrainians have been successful at shooting down many of them, the drones that were able to hit their targets have done significant damage. Ukraine’s capital city Kyiv is experiencing rolling blackouts. At one point last week it was estimated that 40 percent of Ukrainians were without electricity.

Not only is Iran preparing to send hundreds of more drones to Russia for use in Ukraine, but there are plans for Tehran to top up Moscow’s stockpiles with the Fateh-110 missile, a short-range ballistic missile with a range of 300 kilometers. It has been used extensively by Iran and its proxies throughout the Middle East. Iranian-supplied missiles such as the Fateh-110 won’t be a game changer in Ukraine, but they will make life much harder and more dangerous for Ukrainians as winter approaches.

So what is motivating Iran to pursue these aggressive policies in the region and beyond? In simple terms the answer is easy: Tehran’s provocations in the Middle East are a way for the regime to divert attention from its troubles at home. Meanwhile, the proliferation of Iranian drones and missiles in the Middle East and Ukraine kills two birds with one stone for Iran. On the one hand, it will thinly stretch US and regional air defense systems. It could even force policymakers to choose between prioritizing an increase in air defense in eastern Europe or prioritizing it the Middle East. On the other hand, cash-starved Iran benefits from Russia’s purchase of these weapons at a time when Tehran is facing economic problems at home.

While the protests across Iran are not yet existential to the regime, it is also true they are not close to being over. As the situation becomes more difficult at home for the regime, expect even more malign activity elsewhere.

Today Iran is affecting stability in the Gulf and Ukraine. Who knows where it will be tomorrow? It is time for the US and its partners to start responding decisively to the growing Iranian threat, which is only going to get worse before it gets better.