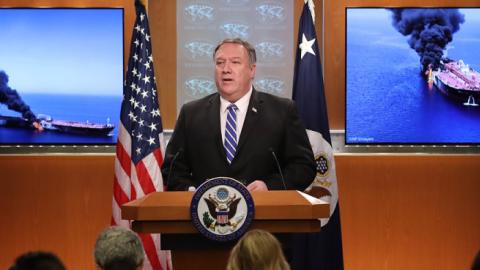 If Iran’s Aug. 4 claim to have seized a tanker carrying “smuggled oil” is true, this brings to three the number of merchant vessels that Iran has taken in recent weeks. It is the most recent escalation in a developing crisis between an increasingly assertive United States and an increasingly bellicose Islamic Republic.

The crisis goes back to the Trump administration’s withdrawal from the Joint Comprehensive Plan of Action (JCPOA), the so-called Iran nuclear deal, in May 2018. The JCPOA gave Tehran elite exactly what it needed: sanctions relief for Iran’s starved economy at the price of moderate restrictions on its nuclear program, with no hard limits on its nuclear ambitions. Loosened financial restrictions also allowed Iran to prosecute its wars in Syria, Iraq and Yemen more effectively.

The Trump administration’s withdrawal from the JCPOA, and subsequent reapplication of sanctions against Iran, disrupted Tehran’s strategic calculus. Although the sanctions are less robust than before 2015, the U.S. has again hobbled the Iranian economy.

In 2016, after only one year of sanctions relief, the Iranian economy grew by 12.3 percent. By contrast, following U.S. withdrawal from the JCPOA and partial reapplication of sanctions in 2018, Iran’s economy contracted by 3.9 percent; it may shrink by another 6 percent this year. Oil exports have been halved. Inflation rose from 9 percent in 2017 to 31 percent in 2018. The cost of food staples like bread, milk, vegetables and poultry has risen by 40 percent to 60 percent, while basic medical care and housing costs rose by 20 percent.

These economic difficulties, almost universally triggered by reapplication of U.S. sanctions, have prompted strikes and protests for the past year.

Iran’s actions are a response to this increased American pressure. After a decade and a half of maneuvering, and five years of open and proxy warfare, Iran has finally established a “Shia Crescent” connecting it to the Mediterranean through proxies and allies in Iraq, Syria and Lebanon. But holding this crescent — meant to act as a springboard for Iran to achieve dominance in the Islamic world — will require blood and treasure.

Iran must neutralize Israel as a strategic threat, confront and defeat Saudi Arabia and its Gulf Cooperation Council affiliates, nullify Jordanian opposition, and either accommodate or challenge Turkey, all while not infringing upon Russia’s interests but pressuring the U.S. and Europe to abandon the region to its fate.

Iran’s actions since early May, particularly the June attacks on Japanese and Norwegian oil tankers and the July seizure of a British tanker, speak to the last element of this strategy. The JCPOA allowed Iran and the European Union to resume a trade relationship that sanctions had ended in 2012. Moreover, several EU member states, Japan and other U.S. partners in Asia depend on Iranian oil. An apparently irrational policy choice — like attacking a Japanese tanker during Japanese Prime Minister Shinzo Abe’s visit to Iran, or harassing EU and British ships — therefore actually furthers Iran’s objectives.

By forcing U.S. allies with whom Iran has economic relationships to experience the punishment of a crisis, rather than exclusively targeting the U.S., Iran can impose localized costs for cooperation with the U.S. European and Japanese ambivalence over punishing Iran demonstrates this policy’s success. Japan has distanced itself from American accusations of Iranian involvement in the June 2019 tanker attacks and refused to join a maritime coalition that the U.S. seeks to organize, to protect shipping in the Gulf. On the other hand, the new British government reversed a previous decision and decided to join the U.S.-proposed international coalition to provide security for merchant shipping in the Gulf.

Continued harassment of international shipping presents the U.S. with a difficult challenge: keeping open the strategically vital choke point of the Strait of Hormuz as well as denying Iran its larger goal of regional dominance. Iran’s challenge to shipping in the Gulf seeks the near-term objective of sanctions relief. But its extensive arming of Hezbollah and leverage in Syria aim at subduing Israel and consolidating Iran’s position as regional hegemon.

While a formal conclusion remains elusive, the Syrian civil war has all but ended. Russian airpower alongside Iranian special forces and proxy groups have ground down the Syrian opposition. Whether it takes six months or two more years, the Assad regime and its sponsors will ravage Idlib as they did Aleppo, moving street-by-street until every opposition fighter — and every man, woman and child opposing the regime — is dead or captured. Rebel forces have been hollowed out by seven years of war; Assad’s forces and regime-affiliated militias can, therefore, bear the brunt of the fighting, freeing up Iranian-backed Hezbollah for other operations.

Israel poses the greatest threat to Iran’s regional ambitions. While Saudi Arabia and Turkey could nominally challenge Iran for leadership of the Islamic world, neither is sufficiently powerful or stable enough to roll back Iranian gains in Syria and Iraq. By contrast, Israel has sophisticated military capabilities that allow it to strike Iran’s nuclear program, while its Mediterranean coastline makes it a natural player in Levantine rivalries. Moreover, opposition to the Jewish State is part of Iran’s raison d’etre, stemming from the Khomeinist Shia supremacist ideology of its founding.

Iran has used Hezbollah against Israel before; in 2006, the Lebanese terrorist organization kidnapped two Israeli soldiers, prompting an inconclusive Israeli offensive during which rocket bombardment paralyzed northern Israel. With Assad’s victory assured, Iran has begun redeploying Hezbollah to the Israeli border. Iran’s presence in Syria has allowed it to transport weapons and missiles directly to Hezbollah; in April, Hezbollah constructed a new missile factory in Beirut with Iranian assistance. Hezbollah also has begun recruiting in southern Syria near the Golan Heights, in an attempt to extend its front against Israel. Additionally, a high-level Hamas delegation, headed by political bureau deputy director Saleh al-Arouri, visited Iran on July 21-25, signifying a renewed partnership between the Gaza-based Palestinian terrorist organization and the Islamic Republic.

Iranian success in tying down U.S. forces in the Arabian Gulf, while drawing Israel into another conflict in Lebanon and Gaza simultaneously, could restrict U.S. ability to help Israel defend itself.

Not only does Hezbollah threaten Israel but it directly threatens U.S. interests. Hezbollah operatives killed 241 American servicemen in Beirut in 1983, tortured and murdered CIA station chief William Buckley in 1985, and murdered Col. William Higgins in 1988. Long-range anti-ship missiles based in Lebanon would directly threaten American warships and allies in the Eastern Mediterranean. Both the U.S. and Israel have a direct interest in eliminating Hezbollah as a military threat. By drawing the U.S. into a confrontation over the Strait of Hormuz, Iran can hope to limit U.S.-Israeli action against Hezbollah in the north.

Iran is nowhere close to a near-competitor to the U.S. — but its ideology, geography and asymmetric military capabilities illustrate the need for wise statecraft and unassailable military dominance if America wants to retain its position as the world’s great power.