It’s Probably Too Late for the Oligarchs to Stop Putin 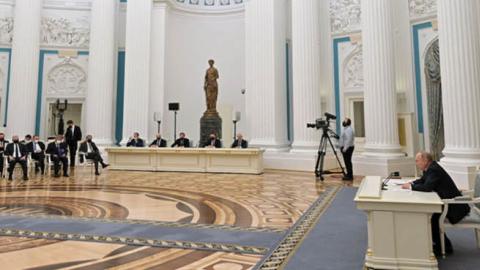 Caption
Russian President Vladimir Putin chairs a meeting of big businesses at the Kremlin in Moscow on February 24, 2022. (Photo by Alexey Nikolsky/SPUTNIK/AFP via Getty Images)

Up to this point, it’s clear that Vladimir Putin’s plans to shatter Ukraine have not worked. Not only is the dictator experiencing resistance from Ukrainian forces he severely underestimated, or even from a suddenly unified West launching unprecedented economic warfare against Moscow, he is getting it from a completely unexpected direction: the oligarchs.

On Sunday, Mikhail Fridman broke the silence of Russia’s billionaires by issuing a letter to employees at his London-based firm, LetterOne. Fridman claimed a “fervent desire … for the bloodshed to end,” according to the Financial Times, and pointed directly to fellow oligarchs, writing, “I’m sure my partners share my view.” And Fridman may be onto something. While his closest partners haven’t spoken publicly about Moscow’s war, especially Petr Aven, a fellow billionaire who joined other oligarchs in a snap February meeting with Putin, another oligarch quickly echoed Fridman’s comments. On Telegram, Oleg Deripaska wrote, “Peace is very important! Negotiations must begin as soon as possible!”

Fridman and Deripaska are among dozens of oligarchs targeted by the West for sanctions, with Deripaska being sanctioned by the U.S. in 2018 and Fridman landing on Monday’s list of oligarchs sanctioned by the European Union. While it may appear odd to hold the equivalent of Russia’s Charles Koch responsible for what its leader does, it’s worth remembering that in Russia, these titans of industry are far more politically entwined than their American counterparts. Like the board of directors to Putin’s chairman, these oligarchs have insights and access into the Kremlin that, the theory behind the sanctions hold, could pressure the Russian president to end the war. One, Roman Abramovich, on Monday claimed to be trying to mediate talks between Moscow and Kyiv.

We shouldn’t pop the Champagne about the oligarchs turning on Putin just yet — two is hardly a flood. Still, it shouldn’t be undersold how remarkable it is that, just a few days into the Kremlin’s bloody fiasco, those who have profited most from Putin’s decades-long rule have suddenly called for a halt to his adventure. But in order to gauge just how important Fridman and Deripaska’s comments are, it’s worth cycling back a few decades to thread the rise of the oligarchs and understand where things may now be going for Putin.

The story of the rise of the oligarchs — men, all of them — is relatively straightforward. In the early 1990s, amid the refuse of the Soviet collapse, Russian authorities began auctioning off previously state-held assets for next to nothing. Gas wells and oil fields, timberland and port facilities, steel plants and aluminum smelters and mining rights — all of the economic crown jewels of the former Soviet state were up for grabs. The Russian government offered all citizens vouchers to bid on the assets, but those with the closest connections to organized crime came out on top and began tapping the revenue these new assets produced. Abramovich swiped the Russian oil giant Sibneft, raking in billions along the way. Elsewhere, Deripaska proved victorious in Russia’s so-called aluminum wars, a victory that came, as the Treasury Department wrote, amid allegations of bribery, contract killings, and ties to Russian mafiosi. On and on, from nickel mines to natural gas to Siberian oil fields, they gobbled as much as they could in what was nicknamed Wild East.

Nor did this initial crop of billionaires stop at the edge of commerce. In 1996, a flailing Boris Yeltsin, seeking funding for his reelection campaign, struck a so-called loans-for-shares deal with a range of leading Russian businessmen. In return for equity in newly privatized assets, these tycoons bankrolled Yeltsin’s reelection as president. Indebted to the billionaires, a doddering Yeltsin fumbled through his second term, withering away while Russia’s richest men earned their titles as oligarchs and pulled the strings. Gorging on the profits of these erstwhile state assets, steering Yeltsin away from any kind of investigations or regulatory oversight, these oligarchs grew fat on the revenues that had previously been directed toward the broader Russian populace. All of this while Russians in the 1990s saw living standards implode, despite the supposed benefits of capitalism over communism, impoverishing and enraging much of the public.

Enter Putin. Emerging as president in 2000, Putin sought to consolidate state power once more and bring the parasitic oligarchs to heel. The former KGB officer used the Russian security services to crack down on Russia’s richest: opening investigations, removing licenses, and threatening prosecutions against those who had feasted on Yeltsin’s regime. Finally, Putin struck a deal with the chastened oligarchs: In return for political acquiescence, and for doing the state’s bidding when it came calling, they could retain their wealth. Stay silent, and stay wealthy.

And most agreed — especially after 2003, when one didn’t. Mikhail Khodorkovsky, then considered the wealthiest man in Russia, spoke up about high-level corruption in Putin’s government. Shortly thereafter, Khodorkovsky found himself behind bars, where he remained for a decade. The message was impossible to miss. Rather than criticize Putin’s sprint toward dictatorship, the oligarchs took their wealth and transformed it into whatever they wanted, from mansions to yachts to artwork to entire soccer clubs (and employing western financial secrecy tools in order to keep much of their ownership secret). Who wouldn’t choose a manor on the French Riviera or an estate outside London over a Siberian prison?

By the early 2010s, life for the oligarchs was good. And then, in 2012, Putin returned to the presidency after pretending to be No. 2. Inflated with a sense of historic mission, incensed at the pro-western governments emerging on Russia’s borders, such as Ukraine’s, Putin grew less interested in reform and far more interested in revanchism. And unlike the days of Yeltsin, there appeared little the oligarchs could do but acquiesce. In 2014, he invaded Ukraine for the first time, primarily to seize Crimea. In response, western governments launched a brand-new slate of sanctions, specifically targeting the oligarchs still circling Putin. Gone were the trips to London and Berlin and Washington, the easy access to Malibu mansions and Miami penthouses. Putin charged on, but the oligarchs watched their access to western markets dry up.

There was a line of thought at the time that this new pressure on the oligarchs would in turn pressure Putin — to convince him of the error of his ways and to realize there were off-ramps available. Squeeze the underlings and maybe the boss will listen, the thinking went. And there might have been a time when that worked. But by the mid-2010s, as is now clear, Putin was already unreachable. Spouting nonsense about the “unity” of Russia and Ukraine, believing of ever-darker plots about western governments targeting Russia, he spiraled from a supposedly “rational” leader into one convinced by his own conspiracies — the consequences of which we’re now witnessing.

Along the way, Putin’s inner circle only got tighter. Rather than schmooze with the oligarchs, he gathered increasingly around only the hard-line nationalists out of the intelligence and security agencies. Rather than rely on the advice of the oligarchs whose business interests aligned with other western investors, he dropped anyone who didn’t parrot what he wanted to hear — and who didn’t think an outright invasion of Ukraine was somehow a good idea. For instance, where Deripaska was once considered a “key ally” of his, there is no indication the oligarch was even aware this invasion was in the cards.

To be sure, the oligarchs are still there. And many of them are still sanctioned, as they should be. But their best days — when they still had Putin’s ear and when they could plow their money into any western jurisdiction they wanted — are long gone. That doesn’t mean we should discount comments from Fridman or Deripaska, because even if they don’t enjoy the same influence they once did, their comments are still signals of just how unpopular this war suddenly appears in Russia and of the fact that sanctions have already taken their toll. Whether it’s enough to convince them to move against Putin — or to potentially help convince the military to launch a coup, in a reprise of the Soviet military’s attempt in 1991 — is anyone’s guess. Given the events of the past week, all that was once unlikely seems possible.

Regardless, these oligarchs are still men who kept their wealth because they refrained from speaking out against Putin in the first place. And they still, even in Russia, have much to lose, as Khodorkovsky can well attest. Yet even they may not be able to turn Putin away from the disaster suddenly unfurling for the entire world to see.