Like Nixon, Trump Has the Opportunity to Build a New U.S.-China Framework 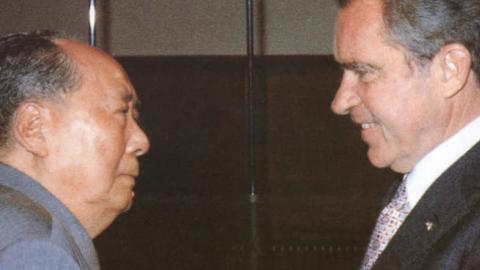 It may have come a decade or two late, but the United States is undergoing the most dramatic reappraisal of our relationship with the People's Republic of China since the famous "opening" pursued by President Richard Nixon nearly 50 years ago. Secretary of State Mike Pompeo is traveling to the Richard Nixon Presidential Library and Museum today to offer a glimpse of America's overhaul of its grand strategy toward China.

There is no issue Donald Trump has been more concerned about over the three decades since the end of the Cold War, in his speeches and writing, than the urgent need to rebalance U.S.-China relations. With sharp campaign rhetoric in 2016 and constant tweets, President Trump has elevated Chinese economic and military aggression as the long-term threats to U.S. interests that they pose. His administration has worked to translate that into a comprehensive strategy, though later in his first term than many of us had hoped.

Some blame President Nixon for helping put China on its path to power in the first place, by first ushering it into the modern community of nations. But the situation was more complicated than that. There is still a great deal we don't know about what really went on during the opening of China in the early 1970s. The Chinese have never released any meeting transcripts or archival documents from their side. And the American account remains mostly reliant on Henry Kissinger's recollections and documents, many of which he has not yet released.

The genius of Nixon's concept for the 1972 opening is that it was strategic in the truest sense. It wasn't just about building trade relations, a gambit to improve our military position against the North Vietnamese or simply a way to gain the upper hand against the Soviet Union. It was the comprehensive application of national power, integrating trade, foreign relations and national security in a creative and surprising way.

Nixon was one of the most strategic thinkers ever to occupy the White House. He planned to manage the relationship with China carefully, always mindful of the goal of rebalancing the global order in America's favor. And yet, toward the end of his life, even Nixon admitted to the veteran columnist William Safire that, with China, "we may have created a Frankenstein."

Nixon was right to end our cold war with China and prioritize it as the most important bilateral relationship in the world. His successor would now be right to change this 50-year old approach—not by unwinding Nixon's work, but by holding China accountable for misconduct by the hard-liners who have undermined China's reformers. Nixon sought to empower leaders like Deng Xiaoping, who believed in opening markets, limited cooperation with the United States and steady, if slow, political reforms. But subsequent U.S. administrations proved unable to stunt the rise of China's hard-liners, who now belittle American power and seek to replace us.

The new geostrategic reality is that China is no longer a third-world supplicant, but, at least by some measures such as purchasing power parity, is now the world's largest economy. The Fortune Global 500 list now features more Chinese than American companies. China has more billionaires. China may launch more space satellites in 2020. The IMF forecasts a U.S. GDP decline of six percent this year, while China will grow at one percent. Beijing is orchestrating a global whisper campaign that China is managing America's inevitable decline.

There is no longer a Soviet empire threatening to bury the West. China is no longer a backward nation desperate for American assistance just to get on its feet. The United States has far fewer justifications for overlooking China's human rights atrocities in places like Hong Kong, Tibet and Xinjiang, their nakedly predatory trade practices, and actions in the South China Sea that Secretary Pompeo just declared "unlawful."

Yet for decades, leaders of both political parties in America behaved as if the balance of power had not changed. The Chinese, on the other hand, are constantly re-evaluating and adjusting their national strategy. One of their key principles is shi, which Sun Tzu described as skill at making your enemy do what you want by "creating a situation to which he must conform"—in other words, controlling the environment of the conflict. And for a long time, America played right into the shi strategy, allowing China to exploit us.

Now the situation is different. Washington's new focus is on American self-protection. When President Nixon traveled to Beijing in 1972, he saw a city with thousands of Chinese on bicycles wearing blue Mao suits. No one could have dreamed that China would become a peer and competitor to the United States, primarily by stealing our own technology and deceiving credulous American leaders of both parties for decades.

At last, Trump has reduced the trade deficit, set up an enforcement mechanism for intellectual property theft, boosted our exports to China and continues to get 25 percent tariffs on the majority of our imports from China. Much tougher measures are likely unless China agrees to a fair, reciprocal and balanced relationship that we have not yet seen. Many Chinese thus far scoff at our pressure as mere pinpricks, defiantly saying, "Is that all you've got?"

Donald Trump is the first president since Richard Nixon to look at China with a new lens. We have a great opportunity—possibly our last—to reset our relations with China for the first time in decades. President Trump is under no illusions about the stronger line we need to take against a regime that bilks its trading partners, steals Western intellectual property, brutally oppresses those in its own territory and beyond, and resorted to obfuscation and cover-up while the mysterious, deadly China virus from Wuhan has already killed 140,000 Americans. Under President Trump, the U.S. finally has the makings of a clear, coherent and comprehensive policy toward China—something that we will look back on, in another 50 years, as the start of our second strategic breakthrough with China.