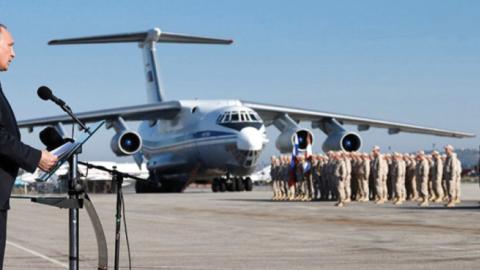 One of the benefits of attending the Valdai Club annual meeting in Sochi is the opportunity to understand were and how strong the wind is blowing in Russian foreign policy. The speeches are not enough. Brief words exchanged in the empty halls of the large hotel up in the Polyana mountains speak much louder — sometimes with an echo.

Most of the Russian participants in Valdai arrive having already sensed the new directions imposed from the top and try to give it their own meaning before everyone else. This year I expected more on the growing entente between Russia and China, the main topic the year before, and was surprised to discover the new leitmotif was something entirely different, although one intimately connected to ongoing redistribution of global power and all its attendant consequences.

Some days it feels we live under a new dispensation already.
When I asked a well-placed insider whether there was a new foreign policy strategy originating from the Kremlin, he denied that it is a new strategy, but admitted that there is indeed a new, how to put it, “mood.” He was searching for the right word.

Moving cautiously — as one should on these matters — here is what I can say about the new mood. Gone seem to be the days of Russia as a chaotic disrupter of the status quo.
Basking in the glow of recent successes, the Kremlin now wants to build a new status quo. That involves establishing bridges to as many actors as possible, placing itself as a mediator when the possibility is open, and even attempting to deepen certain perceptions of predictability and trust. Quite the change.

Russia’s contribution to stability and de-escalation was presented as a reality in East Asia and an aspiration in the Middle East.

For the first time that I can remember, Vladimir Putin refrained from all attacks against the West, preferring to surround himself with four different Heads of State — the presidents of Azerbaijan, Kazakhstan and the Philippines and the King of Jordan — in placid conversation.

Now, if we want to understand what is talking place, it’s absolutely critical that we do not take these developments as an act of contrition. Russia has not gone soft. But neither are they an act of dissimulation.

Rather, the new mood is the second stage in a coherent strategy. If the use of force produced results, the Kremlin now wants to consolidate them. That requires diplomacy, mediation and, above all, patience.

Remember that Machiavelli, who certainly never refrained from violence, devoted many of his best pages to the building of institutions and mores needed to make more durable that which has been acquired by force.

Let me refer to a telling example. In a recent visit to Somaliland I was told that Russia was actively trying to open a naval base in the breakaway region and was even willing to grant it international recognition in return. The gambit failed because the local authorities could not bring themselves to trust the Kremlin. Never go down a well using a Russian rope. I believe that a number of similar cases convinced the Kremlin’s occupants that they needed a procedure to manufacture trust in greater quantity and quality if they wanted to realize their strategic goals.

The problem is acute in Syria. Russia has maneuvered itself into a preeminent position and has even succeeded in forcing the United States to conclude that its position in the country is unsustainable. Trump has just announced a withdrawal. But the problem with being in charge is that no one else can provide order.

Russia perhaps feels that it can do it on its own, but it knows it must find new tools and adopt a new mindset in this expanded role. In Valdai, Foreign Minister Sergei Lavrov again assumed the role of indefatigable mediator between all factions and interests in Syria — although a certain exasperation now seems to be creeping in.

When Putin meets Tayyip Erdogan in Sochi this week, he may well feel that his life mission has been accomplished. For the first time, he sits at the apex of the world order. In what concerns Syria at least, no one is above him.

But that also means that no one else can solve the problems arising everywhere. He must bring together Turkey and the Syrian Kurds, the latter still under the leadership of a violent armed organization. Then he must conciliate the Kurds and the Assad regime and, finally, prevent a war between Turkey and Syria. If Russia fails, all these actors will quickly turn against it.

The question thus is: if Russia is under the obligation of creating political order in Syria, what makes us believe that it is up to the task and willing to pay the associated costs — when even the United States is powerless to create order and does not see the benefits of doing so?

The moment reminds me of the idea advanced after Davos two years ago that China would replace America as the lynchpin of globalization and free trade. As Machiavelli could have told us, things are never so simple.

Read in The Moscow Times