Should the US Temper Its Expectations of India? 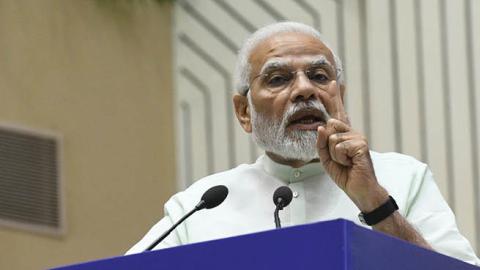 Caption
Prime Minister of India Narendra Modi during the inauguration of the Iconic Week celebrations. (Photo by Sonu Mehta/Hindustan Times via Getty Images)

India is reprising its Cold War-era strategy of walking the tightrope between Russia and the United States. During the virtual summit between President Biden and Indian Prime Minister Narendra Modi in April, as well as the in-person Quad leaders’ summit in Tokyo in May, Biden requested India’s support on Ukraine. India has refused to stop purchasing oil from Russia, even if it has cancelled some Russian arms contracts.

India’s neutrality over Ukraine has dampened the enthusiasm even of those Americans who have projected India as the key American partner in its competition with China. Indians argue that they are only acting in their national interest and that even though their long-term interests remains tied to the U.S., they cannot forego the short-term advantage of neutrality towards Russia.

Instead of voicing frustration with India over its continued friendship with Russia, U.S. policymakers and commentators would do better to revise their expectations of India. The rhetoric about India being as important in U.S. plans for Asia as Great Britain was for standing up to the Soviet Union in Europe after World War II ignores India’s changing view of itself and the world.

Under Modi and his ruling Bharatiya Janata Party, India is in the process of redefining its nationalism, away from the legacy of Mahatma Gandhi and Jawaharlal Nehru. India’s rising Hindu nationalism (which has overtaken the secular nationalism of India’s early years) is centered on reviving India’s ancient Hindu glory. Ancient India was notoriously insular and not particularly interested in partnering with distant peoples.

While Modi’s India still wants to be recognized globally with respect, it hopes to earn that respect through celebration of an International Yoga Day, not through confrontation with China or Russia. That fundamentally different view of what is entailed in India becoming a global great power makes partnership with the West in accordance with Western expectations unlikely.

India’s economy is not growing at a rate that would position it to be China’s competitor. The expansion of India’s middle class has slowed down. Americans hoping to tap India as the next market of more than 1 billion consumers will have to wait to see that dream become a reality, both on account of its slower economic growth and its over-regulation.

Disappointment will be even greater for those expecting India to field its large military forces against China. Declining investment in military capabilities have made India’s military rather inefficient and inadequately modern. India might be able to face off against Pakistan, but it is still far from being in China’s league.

Around 60 percent of India’s military equipment is of Russian origin, and while India plans to purchase more equipment, it is keen on boosting indigenous capability and having a diverse basket of suppliers. That runs contrary to American expectations of being India’s supplier of choice.

Meanwhile, the U.S. expectation of an influx of orders for American-made nuclear reactors from India, which formed an important basis for the 2008 civil-nuclear deal, remains unfulfilled.

India wants to trade and acquire technology with the U.S. on its terms, which it believes are mutually beneficial. But is not about to become the western partner that successive U.S. administrations and many scholars have imagined.

Instead of investing in human capital, nuclear and renewable energy, or health care, the focus of Modi’s government has been on “correcting” history textbooks to change the portrayal of India’s Muslim and Western-colonial rulers while extolling the virtues of the ancient Hindu era.

Hyper-nationalism has also led to a new wave of protectionism and regulation, which impedes economic expansion. India has also lost the glow of being a success story for democracy and individual political rights. In 2021 and 2022 Freedom House downgraded India to “partly free,” citing attacks on religious minorities, suppression of media and weakening of institutions.

Comments by American officials about India’s direction inevitably attract charges from Indians of unwarranted interference in India’s internal affairs. Secretary of State Antony Blinken recently released the State Department’s 2021 Report on International Religious Freedom and spoke about “rising attacks on people and places of worship” in India. He was widely criticized in the Indian mainstream and social media.

Blinken also described India as “the world’s largest democracy, and home to a great diversity of faiths,” reminding everyone that the image of India as a pluralist and open society might be its great strength in external relations. That image, and the hope that India would be a global great power once it realizes its full economic and military potential, have suffered because of the ideological obsessions of India’s current leaders.

But what is unpopular in the U.S. is popular in India. Modi and his party have been repeatedly rewarded at the ballot box for talking about their civilization’s glorious past. As India postpones building a modern future or chooses to do it at its own pace and on its own terms, western cheerleaders for India’s rise may have no choice but to modify their expectation that India will help fight alongside the world’s democracies against totalitarian China or Russia.