Ten Myths about US Aid to Ukraine 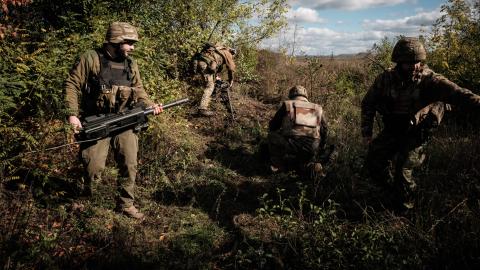 Caption
A Ukrainian soldier fires a US-made MK-19 automatic grenade launcher towards Russian positions in less than 800 metres away at a front line in Donetsk, Ukraine, on October 12, 2022. (Dave Clark/AFP via Getty Images)

Ukraine is in a national struggle that will determine its geopolitical future: the country will either be a firm member of the Euro-Atlantic community or become a Russian colony. The outcome of this struggle will have long-term implications for America’s global interests, the future of the transatlantic community, and the notion of national sovereignty in the twenty-first century.

Russia is a top geopolitical adversary for the United States. For Americans who believe in strong and secure national borders, the primacy of national sovereignty, and the right to self-defense, support for Ukraine in the face of Russian aggression is natural. Considering America’s other geopolitical concerns, such as a rising China and a healthy economic relationship with Europe that benefits the American worker, US support for Ukraine is an imperative.

Ukrainians are not asking for, nor do they want, US troops to help them fight Russia. All they ask for is the equipment, weapons, munitions, and financial resources required to give them a fighting chance. Providing Ukraine what it needs to fight Russia effectively will not be cheap.

So far this year, the US Congress has voted on three different supplementals for Ukraine: $13.6 billion in March, $40.1 billion in May, and $12.4 billion in September. The cost that American taxpayers incur to help Ukraine is money well spent and will pale in comparison to the cost of deterring a victorious Russia or an emboldened China on the global stage.

As the war continues, Congress will likely pass additional spending. It is in America’s interest that Ukraine wins the war, and that Russia is decisively defeated. Even though polling overwhelmingly shows broad and bipartisan support for Ukraine, some in Congress are against further US aid for Ukraine.

Here are the top ten myths and misconceptions about US aid for Ukraine and why they are wrong:

Myth 1: There is not enough oversight of US aid to Ukraine.

Reality: There has likely never been more accountability or transparency measures in place for US foreign assistance than what is available for Ukraine aid. Take the biggest (and most controversial) supplemental from last May, which allocated $40.1 billion. This bill was 699 lines long. Of these, 110 lines dealt with accountability, transparency, and reporting requirements. Therefore, 16 percent of the bill’s text was dedicated to oversight. May’s bill also included 16 separate reporting requirements to the US Congress for the Department of Defense, Department of State, US Agency for International Development (USAID), and the Department of the Treasury. To date, the three Ukraine supplementals have allocated an additional $14 million for the Inspectors General of the Department of Defense, Department of State, and USAID to increase oversight. There is plenty of accountability and oversight. Those who argue that there is not enough have failed to outline in detail what additional oversight is needed.

Myth 2: We have written more than $66 billion worth of “blank checks” for Ukraine.

Reality: This claim is misleading. The sum of the three Ukraine supplementals totals $66.1 billion, but not all this money goes to Ukraine. Billions of dollars have gone toward other items like replenishing US military stocks, deterrence measures in Eastern Europe outside Ukraine, and energy-related issues. For example, so far $14 billion has gone to replenish US stocks of equipment, $9.7 billion to US European Command to increase the military presence in Eastern Europe, and $2 billion to address the increase of energy costs related to the war in Ukraine. The billions of dollars allocated for military assistance to Ukraine never leave the United States. Despite the perception that opponents of American aid to Ukraine create, funds for military support are not wired to Ukrainian government bank accounts. Instead, the US president uses the appropriated funds for a drawdown of military equipment to be sent to Ukraine. For the US to give funds to the Ukrainian government, like the $13.2 billion for the Economic Support Fund, the secretary of state and administrator of USAID have to jointly submit a report to the relevant congressional committees on the proposed uses of these funds. There are no “blank checks.”

Myth 3: Congress hasn’t had “enough time to debate” US aid to Ukraine or “read the bill.”

Reality: In 2022, Ukraine has been the single most discussed, reported, and debated foreign policy issue in the United States. Lawmakers, policymakers, and commentators routinely discuss the war in Ukraine and the US role in supporting Kyiv. Far from there not being enough time to debate Ukraine, the war is continuously debated throughout the public square and the halls of Congress. Also, lawmakers have had plenty of time to read the supplementals—which have been relatively short in length—before each vote. The Ukraine supplemental from May has been the longest one in length to date, and it received the most criticism on the grounds that there was not enough time to consider it. The text of this bill was 29 pages long and approximately 4,900 words in length. The average adult can reportedly read around 250 words per minute, meaning someone would need approximately 20 minutes to read the text of May’s bill.

Myth 4: This money to Ukraine would be better spent on “the wall” or “baby formula.”

Reality: This is like saying that a man must choose between being a committed husband, a loving dad, or a hard worker. Sometimes in life, one must do more than one important task at a time. The same applies to when governing a superpower. Furthermore, the issues of US support to Ukraine, the horrific and chaotic situation at the southern border, and the shortage of baby formula are not connected issues. When lawmakers voted on the supplemental in May, they did not have to choose between either alleviating the baby formula shortage or supporting Ukraine.

Myth 5: Europe needs to “spend more” before America does.

Reality: Yes, Europe needs to spend more, but it is misleading to suggest that it is not doing much. The US leads in total financial commitments to Ukraine. However, according to the respected Kiel Institute for the World Economy’s Ukraine aid tracker, Latvia, Estonia, Poland, Lithuania, Norway, Slovakia, and Czechia have given more to Ukraine than the US as a percentage of GDP. (The United States and United Kingdom are tied for eighth place.) Also, because a lot of aid is unannounced, it is impossible to know how much European countries have given to Ukraine. Of course, Europe can do more, but complaining that it is not spending enough is no excuse for the US to stop supporting Ukraine.

Myth 6: The US should only give “military aid.”

Reality: Some propose this argument to find a middle ground or compromise with those who do not want to provide any aid to Ukraine. However, this proposal is a half-measure that would only get partial results. The Ukrainian military is not the only actor at war with Russia. As shown by Russia’s indiscriminate use of Iranian drones to target civilians, the whole of Ukrainian society is at war. The war has eliminated an estimated 45 percent of Ukraine’s GDP. Even so, the Ukrainian government and essential public services need to function properly for the nation to remain on a total war footing. For years, critics of America’s approach to the wars in Iraq and Afghanistan complained that Washington focused too much on the warfighting and not enough on nonmilitary aspects of the conflicts. Now that the US is doing the opposite in Ukraine, many of the same people now criticize this comprehensive approach to US aid. This support needs to be broad in scope. Those who call for the US to give only military support fail to see the bigger picture in Ukraine.

Myth 7: US weapons are ending up on the black market or are not getting to the front lines.

Myth 8: Ukraine is too corrupt to receive aid responsibly.

Reality: To date there have been “no high-profile cases of corruption involving donated military equipment, budget funding, or humanitarian aid.” It is no secret that corruption is a problem in Ukraine. This is the case with most of the states that gained independence after the dissolution of the Soviet Union in 1991. Since 2014, Ukraine has taken positive steps at fighting corruption. However, US policymakers and commentators need to be realistic about how much and how quickly Ukraine can reform during a war of national survival. In the meantime, the US should continue with the comprehensive and strict oversight measures in place for US aid, and when possible continue helping Ukraine with its anti-corruption reforms.

Myth 9: Russia is a distraction. US focus must be on China.

Reality: Russia is China’s junior partner. A weakened or defeated Russia means a weaker China. Beijing is also watching how Western powers support Ukraine, so a strong and victorious Ukraine makes Taiwan stronger too. Some have suggested that the US should sacrifice its security interest in Ukraine to focus on the threat from China. Many of Russia’s and China’s strategic goals in Europe overlap. Both want a weakened and divided Europe that both can exploit. Both want to eclipse the US partnership with Europe so that the free world is divided and more vulnerable. Russia shifted many of its forces involved with the invasion of Ukraine from its Eastern Military District, so the number of troops near Russia’s border with China is at a historically unprecedented low level. This point demonstrates how much Russia trusts China. The choice between security in Europe or security in the Indo-Pacific is a false dichotomy. In terms of US national interests, these two regions are intimately linked.

Realty: America’s foreign policy challenges are too complex to be boiled down to bumper sticker slogans like “America first” or “America last.” Anyone who uses these terms to describe the US role in the world knows little about foreign affairs and is best ignored.