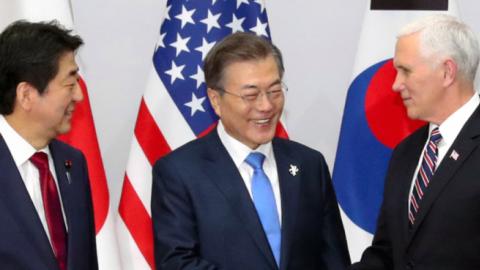 During an era in which strategic gravity is shifting to Asia, the United States cannot be careless in tending to its alliances with Japan and South Korea (the Republic of Korea, or ROK). The three countries face persistent threats from North Korea and from China’s semi-transparent bid for regional hegemony. Meanwhile, rocky relations between Tokyo and Seoul are jeopardizing vital U.S. interests in the Indo-Pacific. The latest disagreement between America’s premier allies raises new questions about alliance strategy, commitment, and burden-sharing. These fissures have become exacerbated as the U.S. pressures allies to increase their contributions to regional security and reciprocal trade.1

Real and perceived disarray among three of the world’s top democracies bodes ill for a future order. Now is a poor time to raise doubts about the durability of U.S. alliances in Northeast Asia. Indeed, this is a time when solidarity among like-minded states should lead them to reinforce commitments to a rules-based order and check potential aggression in all its forms. The alliances are not just discrete relationships but part of a post–World War II system that is generally favorable to U.S. interests and values.2

The Trump administration’s vision of a free and open Indo-Pacific is founded on the defense of these partnerships. A free and open region, in turn, requires effective alliances and partnerships. Allies and partners are critical to reinforcing a postwar system that is under siege by revisionist powers.3 Alliances are still some of the best means to achieve common ends, and they remain a unique advantage not enjoyed by a rising China. The foundation of U.S. regional policy begins with ironclad bilateral alliances in Northeast Asia. As the Defense Department’s regional strategy report states, the “U.S.-Japan Alliance is the cornerstone of peace and security in the Indo-Pacific”4 and the “U.S.-ROK Alliance is the linchpin of peace and prosperity in Northeast Asia, as well as the Korean Peninsula.”5

While the alliances were once fit for purpose, both security trends and internal frictions suggest that change is needed. Deterring North Korea’s nuclear and missile programs requires strength. In addition, China’s ambition to be world dominant in critical dual-use technologies like artificial intelligence (AI) puts extra stress on market democracies to remain united. If allies are part of the solution to twenty-first-century security challenges, however, they are also part of the problem. For both America’s long-standing and newer partners, emerging threats and challenges have transcended the political will and flow of resources needed to counter them. Although President Donald Trump’s strategy documents underscore the value of alliances, the president’s political constituents embrace his call for others to bear more costs.

This report seeks to explain why the U.S.-Japan and U.S.-ROK alliance are still a vital means of achieving overlapping strategic interests. At the same time, it also argues that keeping these alliances fit for purpose requires radical change rather than business as usual. Both a rapidly changing security environment and growing intra-alliance squabbling pose dangers that require U.S. leadership. This report concludes with specific ideas for advancing bilateral and trilateral cooperation in the coming months and years, without trying to achieve too much too quickly.