The U.S. and U.N. Have Abandoned Christian Refugees 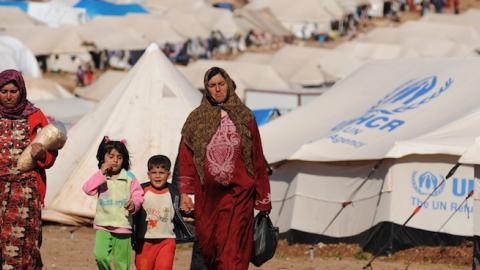 Caption
Syrian internally displaced people walk in the Atme camp, along the Turkish border in the northwestern Syrian province of Idlib, on March 19, 2013. (BULENT KILIC/AFP/Getty Images)

Six months ago, Secretary of State John Kerry officially designated Islamic State as “responsible for genocide” against Christians, Yazidis and other vulnerable groups in areas under ISIS control in Syria and Iraq. So why has the Obama administration entrusted the survival of these people—and so much valuable American aid—to a troubled office at the United Nations, which, like its parent organization, has never even acknowledged that the genocide exists?

The State Department says it is helping religious minorities who have fled, along with millions of other displaced Syrians and Iraqis, primarily through the U.N. America has sent over half of $5.6 billion in humanitarian aid earmarked for Syrians since 2012 to the U.N.

Yet the U.N.’s lead agency for aiding refugees, the Office of the High Commissioner for Refugees (UNHCR), marginalizes Christians and others targeted by ISIS for eradication in two critical programs: refugee housing in the region and Syrian refugee-resettlement abroad.

For instance, the Obama administration’s expanded refugee program for Syria depends on refugee referrals from the UNHCR. Yet Syria’s genocide survivors have been consistently underrepresented. State’s database shows that of 12,587 Syrian refugees admitted to the U.S. in the fiscal year that ended Sept. 30, only 68 were Christians and 24 were members of the Yazidi sect. That means 0.5% were Christians, though they have long accounted for 10% of Syria’s population. In 2015, among 1,682 Syrians admitted, there were 30 Christians and no Yazidis.

Asked about these numbers at a Sept. 28 Senate hearing, Deputy Assistant Secretary of State Simon Henshaw asserted that only 1% of Syria’s registered refugees are Christians. How to square that with the estimate that half a million Syrian Christians—a quarter of that community—have fled, as Syriac Catholic Patriarch Younan warned in August.

State Department officials variously speculate that Christians don’t want to register for resettlement abroad, or that they are waiting in line behind hundreds of thousands of Sunni Muslims who left Syria earlier.

Yet there is evidence to suggest that the problem lies within UNHCR. Citing reports from many displaced Christians, a January report on Christian refugees in Lebanon by the Catholic News Service stated: “Exit options seem hopeless as refugees complain that the staff members of the United Nations High Commissioner for Refugees are not following up on their cases after an initial interview.” This failure could be another example of why the U.N. Internal Audit Division’s April 2016/034 report reprimanded the UNHCR for “unsatisfactory” management.

At a December press conference in Washington, D.C., I asked the U.N.’s then-high commissioner for refugees, António Guterres, to explain the disproportionately low number of Syrian Christians resettled abroad. The replies—from a man poised to be the U.N’s next secretary-general—were shocking and illuminating.

Mr. Guterres said that generally Syria’s Christians should not be resettled, because they are part of the “DNA of the Middle East.” He added that Lebanon’s Christian president had asked him not to remove Christian refugees. Mr. Guterres thus appeared to be articulating what amounts to a religious-discrimination policy, for political ends.

As for why so few Christians and Yazidis are finding shelter in the UNHCR’s regional refugee camps, members of these groups typically say they aren’t safe. Stephen Rasche, the resettlement official for the Chaldean Catholic Archdiocese in Erbil, Iraq, told Congress last month that in Erbil “there are no Christians who will enter the U.N. camps for fear of violence against them.”

The pontifical Aid to the Church in Need and the American Christian Aid Mission wrote in recent emails to me that no Christians dare shelter in the U.N. Zaatari camp in Jordan, which houses 80,000 Syrian refugees. As one Syrian Christian who was resettled in the U.S. explained in the Sept. 26 Washington Examiner, after fleeing ISIS in Aleppo, his family was too afraid of “becoming targets of Muslim extremists” to go into Lebanon’s camps.

Erbil’s archdiocese, which oversees care for 70,000 people displaced by ISIS, including half of Nineveh’s Christians, has reported that U.N. aid bypasses them. As Mr. Rasche told Congress in September, “[S]ince August 2014, other than initial supplies of tents and tarps, the Christian community in Iraq has received nothing in aid from any U.S. aid agencies or the U.N.” He warned that the community faces extinction without more assistance.

Persecuted groups also found no help from the U.N.-established Independent Commission of Inquiry on Syria in its only report on ISIS genocide. Issued in June, the report focused solely on persecuted members of the Yazidi faith. The commission—an influential adviser to the UNHCR—dismissed in a short paragraph the notion that Christians also have been targeted for genocide.

Echoing ISIS propaganda and without citing evidence, the commission report declared that ISIS recognizes their “right to exist as Christians . . . as long as they pay the [Islamic] jizya tax.” Not true, according to the Patriarch Younan and the Syriac Orthodox Patriarch Aphrem, who told me in August in Rome that no intact Christian communities or functioning churches remain in the parts of Syria or Iraq under ISIS.

Genocide is the most heinous human-rights violation. For America to entrust the survival of communities on the brink of extinction to a U.N. operation that routinely fails them is the height of cynicism.

The administration should ensure that American aid reaches these displaced minorities, including refugee visas for the neediest. Congress can make sure that happens by quickly bringing to a vote the bipartisan Iraq and Syria Genocide Relief and Accountability Act, introduced Sept. 8 by Reps. Chris Smith (R., N.J.) and Anna Eshoo (D., Calif.).