The US and EU Shake Up Global Trade 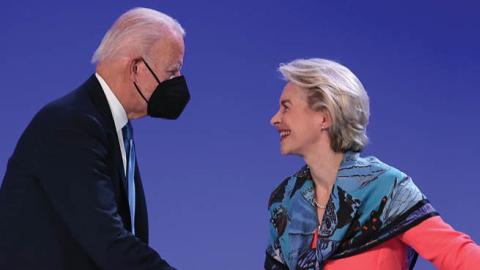 The Group of 20 summit in Rome last weekend was highly unusual. Unlike most global gabfests, it actually mattered—not because the sterile G-20 format and the anodyne communiqués it predictably generated meant or accomplished anything of significance. It mattered because the U.S. and the European Union, sidestepping the G-20 process, unveiled a tentative trade agreement that significantly sharpens the competition with China, and because five G-20 heads of government (China, Japan, Mexico, Russia and South Africa) were absent, highlighting the declining importance of these ritualized displays of international comity.

The most important news out of Rome had nothing to do with the G-20. The temporary trade deal announced by European Commission President Ursula von der Leyen and President Biden does more than put some of the Trump -era steel and aluminum tariffs and retaliatory measures on ice. It lays out a new approach to world trade that, if it takes hold, could usher in the most consequential changes to the international trade regime in half a century or more.

At one level, the deal represents a clever compromise. Instead of fighting each other over steel, the U.S. and the EU agree to turn their mutual fire on China. The EU gets 4.4 million tons of duty-free steel exports to the U.S. for the next two years and 3.3 million tons after that. The U.S. gets EU cooperation against the Chinese steel industry and forestalls EU retaliation against U.S. tariffs that the EU argues are illegal under World Trade Organization rules.

For the Biden administration, the deal is a significant victory. It strengthens the kind of economic trans-Atlantic cooperation against China that the administration wants. It employs the leverage that President Trump’s unconventional tariff policies produced while reducing the trans-Atlantic tensions Mr. Trump caused. And it simultaneously pleases two of the constituencies the administration cares most about: organized labor and climate activists.