If the U.S. doesn’t counter China’s military mission creep with its own whole-government approach to economic aid in the South Pacific, America and its allies will cede commercial access, military freedom of navigation, and strategic influence across the 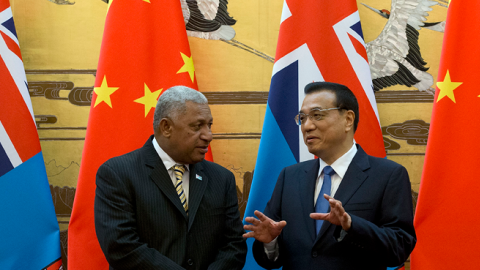 * China has gradually militarized its facilities in the horn of Africa (Djibouti) under the pretense of anti-piracy operations and development aid since 2017, which has forced the U.S., France, and Japan to accept a permanent Chinese military presence in the same 14,400 square-mile African territory, where China is now holding live-fire exercises.
* Dubbed the “Djibouti strategy,” Beijing is now executing this tactic across the South Pacific, one of the most aid-dependent regions of the world. China, one of the highest contributors to Official Development Assistant (ODA) in the South Pacific, uses that tool at first under the guise of aid while actually employing it to shape the islands’ infrastructure to its own strategic military advantage.
* China is currently building infrastructure capable of dual economic and military use in Fiji, the Cook Islands, Samoa, Tonga, Vanuatu, and other Pacific islands. These projects support China’s aim to break through the First and Second Island Chains, a series of pro-U.S. countries that limit Chinese naval access to the Philippine Sea and Pacific Ocean.
* Meanwhile, U.S. ODA is deployed inefficiently and inconsistently through 19 separate agencies. The design, delivery, and administration of U.S. development assistance must be reformed.
* ODA is a national security issue, not just a humanitarian one. The U.S. defense community needs to embrace the strategic potential of ODA and its capacity to strengthen democracies and counter malign influence abroad.

If the U.S. doesn’t counter China’s military mission creep with its own whole-government approach to economic aid in the South Pacific, America and its allies will cede commercial access, military freedom of navigation, and strategic influence across the world’s largest bodies of water.

* Merge the 19 U.S. agencies currently responsible for ODA or establish a lead agency with full budgetary authority and the status of a Cabinet-level department.
* Embrace bilateral and mini-lateral delivery of assistance to align ODA with national security objectives and strengthen alliances with Australia, Japan, and New Zealand.
* Incorporate ODA into strategies designed to accomplish the objectives of the 2017 National Security Strategy and 2018 National Defense Strategy, and the broader objectives defined by the State and Defense Departments.