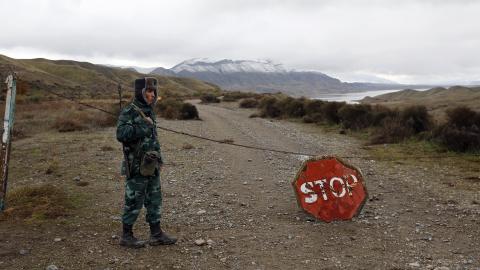 Caption
An Azerbaijani soldier keeping guard by the Aras River, which forms much of Azeri-Iranian border, in Jabrayil, Azerbaijan, on December 7, 2020. (Murat Kaynak/Andalou Agency via Getty Images)

During a parade in Baku in December 2020 marking Azerbaijan’s victory in the Second Karabakh War, Turkish President Recep Tayyip Erdogan recited an Azerbaijani poem that caught the attention of Iran.

The poem, titled “Gulustan,” speaks of sadness resulting from the fact that the Aras River divides the ethnically Azerbaijani people in the Republic of Azerbaijan from those in Iran.

The line of the poem that particularly irked Tehran was: “They separated the Aras River and filled it with rocks and rods. I will not be separated from you. They have separated us forcibly.”

This line suggests to some that all ethnic Azerbaijanis will be reunited someday.

Although the poem was written in 1959, it deals with an issue dating back to 1828. At that time, the Treaty of Turkmenchay between Imperial Russia and Persia, which ended the Russo-Persian War (1826-1828), created a border between the powers along the Aras River. Today, Azerbaijanis are thought to be the second-largest ethnic group in Iran.

Last week, Iran conducted an unprecedentedly large military exercise along its northern border with Azerbaijan. These military maneuvers were different from previous exercises for a couple of reasons.

Firstly, they were accompanied by a slick messaging operation from Tehran. For example, Iranian state-run TV broadcast a music video, apparently produced by the Islamic Revolutionary Guard Corps, that included footage from the military exercise. The lyrics of the song that was used warned Israel not to “stray too far from your path, don’t dig your own grave with your own hands” while also cautioning Azerbaijan that “anyone who looks at Iran the wrong way must be destroyed.”

Secondly, and perhaps more consequentially, a major part of the training exercise included the rehearsal of a military assault across the Aras River. For civilians, crossing a river is a simple matter of walking or driving over a bridge. But as Russia has shown in Ukraine, constructing a temporary bridge under gunfire to support a military operation is no easy task. In fact, in the case of Russia’s attempts in Ukraine, it has often proved to be deadly.

Although for the most part the Aras River serves as the border between Azerbaijan and Iran, there are some small sections of the river that are entirely inside Iran. It was at one of those locations that the IRGC was filmed constructing a temporary pontoon bridge and rehearsing a military river crossing. It was clear to anyone watching the exercise that it was sending a message to Azerbaijan.

Another point of contention between Azerbaijan and Iran is over the establishment of the so-called Zangezur Corridor. As part of the November 2020 ceasefire agreement that ended the Second Karabakh War, Armenia pledged to “guarantee the security of transport connections” between Azerbaijan proper and its autonomous Nakhchivan region, an exclave nestled between Iran, Armenia and Turkey.

Almost two years later, a transport corridor connecting these two parts of Azerbaijan, via Armenia’s Syunik province, is no closer to reality.

Tehran does not like the idea of the Zangezur Corridor for two reasons. Firstly, the effect of such a transport link would be felt beyond the region in a way that is not in Iran’s interest. It would ultimately connect Turkey to the heart of the Eurasian landmass in Central Asia. Tehran is very aware that this transport route would be another one with which Iran would have to compete.

Secondly, connecting Azerbaijan proper with its Nakhchivan exclave through the Zangezur Corridor would reduce Iran’s influence in the region. Currently, Azerbaijan relies on access to Iranian airspace and territory to supply Nakhchivan. In addition to these transit rights, Azerbaijan also relies on Iran to provide natural gas to Nakhchivan. If Iran was no longer needed for these purposes, Azerbaijan would be in a stronger position to challenge it in the region. Tehran does not like this. Over the summer, Supreme Leader Ayatollah Ali Khamenei tweeted his concern about the establishment of the Zangezur Corridor.

In response, Iran has become more involved on the ground in the region. For example, Tehran announced last week it is opening a consulate in Kapan, a small city in Armenia close to where the Zangezur Corridor would be. Visits by high-level government delegations between Armenia and Iran are commonplace.

The heightened tensions between Azerbaijan and Iran come at an interesting time in regional geopolitics. Civil unrest has rocked the latter for more than 40 days during sustained protests against the death in police custody of Mahsa Amini.

Meanwhile, Armenia and Azerbaijan are probably closer to a lasting peace agreement than they have been in recent memory. This could lead to the normalization of relations between Armenia and Turkey and serve as a much-needed boost to the region’s economy.

It is understandable that global policymakers are closely monitoring developments in Ukraine and keeping an eye on China and Taiwan — but they should not ignore what is happening in the South Caucasus. The international community should put pressure on Iran so it does not become a spoiler of peace in the region.