Skip to main content
SVG
In the Media
NPR

What The U.S. Hopes To Get From Trade Talks With China 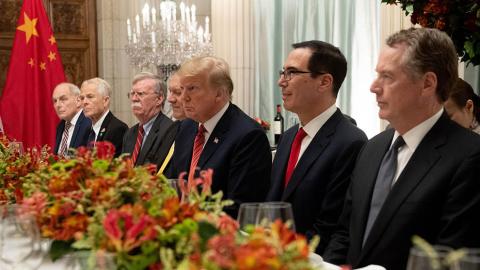 Caption
US Secretary of the Treasury Steven Mnuchin, US Trade Representative Robert Lighthizer, along with members of their delegation, hold a dinner meeting with China's President Xi Jinping at the end of the G20 Leaders' Summit in Buenos Aires, on December 01,

And now to someone who's written about the national security concerns that Huawei and other Chinese companies present to the U.S. Michael Pillsbury is author of the book "The Hundred-year Marathon: China's Secret Strategy To Replace America As The Global Superpower." And he's now an informal adviser to President Trump. I asked Pillsbury what he makes of the timing of Meng's arrest.

MICHAEL PILLSBURY: From what I know of the Department of Justice, they're mostly lawyers. And they look at things through very clear legal lenses. So the idea that this is somehow wrapped up with foreign policy in general I think is not credible.

CHANG: But do you think this arrest plays into protecting the U.S.'s national security interests? Because as we heard, there is concern that Huawei's technology is introducing spyware that could be used against the U.S.

PILLSBURY: Well, as - I think it's part of a much larger policy.

CHANG: So you do think this arrest could be interlinked with other interests.

PILLSBURY: No, no, the legal issues have to be the most important. In other words, just to pick somebody out and say, OK, Ailsa Chang, you're under arrest 'cause we don't like NPR - no, this is very unlikely to happen in the United States. More likely is the atmosphere has changed so that the departments of Commerce and Treasury were asked several months ago to probe into the activities of Huawei. As you know, there's been an enormous effort to impose quite strong sanctions on Iran. So if this has something to do with the sanctions on Iran, then again, it would have to be something she personally did or authorized.

CHANG: Do you think this arrest has imperiled the trade talks with China?

PILLSBURY: I think it depends entirely on the explanation that the U.S. government provides to the Chinese government. I think they legitimately are interested in, why did you do this? If the explanation is thoughtful and there's clear evidence of illegal conduct, no, it will not harm the U.S.-China trade talks.

CHANG: I want to zoom out a little bit. I mean, at this point, what must China offer that it hasn't offered so far in order for you to advise the president to accept a deal?

PILLSBURY: They've already made a very important concession, Ailsa. By agreeing to this 90-day framework and the subjects that the American side has listed, they have already given us a pretty big gift. As recently as last week before Buenos Aires, their position was China has never engaged in intellectual property theft; Chinese companies never have forcible transfer of technology.

CHANG: Right. But what additional gestures do you need to see before you think the president...

CHANG: ...Should accept a deal with China?

PILLSBURY: There's only one thing...

CHANG: What is that?

PILLSBURY: ...That the American side wants. It's a signed agreement, an enforceable agreement. We don't have that now with China. Frankly, there's been an effort more than 20 years to create something called the bilateral investment treaty. And our side has been unwilling to accept China's long list called the negative list where you can't invest in China. And frankly, some of the best investment opportunities in the country are banned for all foreigners. So if the bilateral investment treaty list can be pared down, if Ambassador Lighthizer can get that in writing in a way that can be verified - let's put it that way...

PILLSBURY: Yes, explicit - a legal document. That's the one thing I think the Trump administration is looking for.

CHANG: I want to ask about another Chinese telecom company that the U.S. took action against, ZTE. This was for violating U.S. sanctions against Iran as well. The U.S. banned American companies from selling parts to ZTE, which would have forced the company to shut down. But then after talks with Beijing, the administration backed down, reversed the ban and instead imposed a $1 billion fine on ZTE - not just a slap on the wrist, still a hefty fine. But do you think it was a mistake to walk back the punishment?

PILLSBURY: No. What President Trump is doing - he's essentially focused his strategy on - and correctly so - on President Xi. This is the man who has the power to make right all these illegal Chinese activities. So in the case of ZTE, it's not quite what you mentioned a few seconds ago. It's not quite like that.

CHANG: What part did I get wrong?

PILLSBURY: Not wrong, but the initiative was a phone call where President Xi essentially asks a favor. President Trump has explained this. He says, this - these sanctions themselves we can put up with, but it's a 70,000-job company that's going to collapse and go bankrupt because you're not going to sell parts for seven years. Could you reconsider? And President Trump explained this. This is a request from President Xi not to destroy the company but that the sanctions can go forward.

So he asked Secretary of Commerce Wilbur Ross to rethink the sanctions. The sanctions were actually made a little bit tighter. So this is part of the strategy of focusing on President Xi and not blaming him for any of this activity. It's as though President Trump is bringing to President Xi's attention, people below you are doing all these things that are basically causing China to lose face and to lose its reputation; would you like to have an agreement that we can fix these issues? And President Xi at Buenos Aires by all accounts has said yes.

CHANG: But does an approach like that send a message that Chinese firms can go ahead and violate U.S. sanctions and just pay a fine and be done with it because the U.S. wants to preserve its relationship with President Xi?

PILLSBURY: Well, it's not preserve our relationship with President Xi. It's exempt him from blame for illegal activities carried out by others.

CHANG: And what does exempting President Xi from blame get the U.S. in the long run?

PILLSBURY: Well, it gives us the chance - gives President Trump and his team the chance to persuade President Xi. Sign this agreement. Fix these things. He's already committed to doing more reforms. The key thing is, will those reforms match what the American side is asking, and will he sign them in a bilateral agreement? I think the answer is yes. I'm quite optimistic. But ups and downs that scare the stock market...

PILLSBURY: You know, it just seems to be part of the noise of - background noise that we're going through.

CHANG: Michael Pillsbury is director for Chinese strategy at the Hudson Institute. Thank you very much for coming in today.