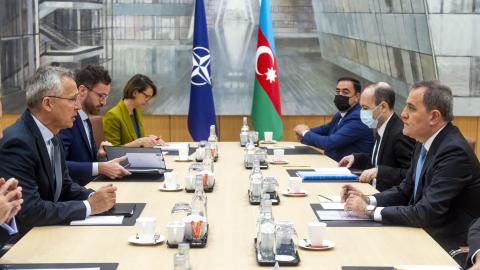 The presidents of Turkey, Azerbaijan and Turkmenistan — Recep Tayyip Erdogan, Ilham Aliyev, and Serdar Berdimuhamedov — met last week in the Turkmen city of Awaza on the Caspian Sea coast, following a meeting of their foreign ministers over the summer.

Considering the economic and cultural links the three countries share, it is surprising that this was their first such summit. There were two main topics: new ways of getting gas from the region to international markets, specifically from Turkmenistan across the Caspian and then to Europe, and the potential of new trade routes linking different markets of Eurasia.

Turkmenistan is thought to have the fourth-largest reserves of natural gas in the world. A pipeline is the only economically viable way to move it across the Caspian Sea because the alternative, turning it into LNG, is too costly for transport over such a short distance. Without a pipeline, there is no profitable way to transport gas from Central Asia to Europe without first going through Russia or Iran. Considering the state of relations between Brussels, Moscow and Tehran, this is not an option.

The timing is right for Trans-Caspian Pipeline for a few reasons. First, its two main opponents, Russia and Iran, are distracted and weaker in the region than they ever have been. Neither wants a pipeline connecting the eastern shore of the Caspian with its western shore, because they know that Turkmen gas could reduce Europe’s dependency on their energy. With domestic turmoil and protests across Iran, and Russia’s botched invasion and quagmire in Ukraine, neither country is in a strong position to stop the construction of a pipeline.

Second, Turkmenistan is desperate for new energy markets. Currently, most of its gas is exported to China. A much smaller amount ends up in Russia, and some will now be exported to neighboring Uzbekistan too. However, diversifying gas exports to European markets would bring benefits to the ailing Turkmen economy.

Finally, Europe is desperate to find new sources of energy away from Russian imports. This is particularly true regarding natural gas. Already, the EU has signed a deal with Azerbaijan to double the amount of gas imports. If Turkmenistan could be connected to the Southern Gas Corridor that already delivers Azerbaijani gas, it would help to create the energy security that the EU desires.

The summit also focused on regional trade. Erdogan wants to make Turkey a hub for regional trade, and to connect the Turkic world, in which Azerbaijan and Turkmenistan are important actors, more closely in terms of transport. Furthermore, with international sanctions hitting Russia and Iran, there is a growing desire by many countries in the region to look for new routes for trade and transit. To bypass Russia and Iran, there is only one viable option for east-west trade on the Eurasian landmass —the so-called Middle Corridor through the South Caucasus.

The Middle Corridor already has one established route from Azerbaijan, Georgia and Turkey, passing through Azerbaijan’s Ganja Gap — a narrow 100 kilometer trade corridor sandwiched between Russia and Iran. The Ganja Gap has been the preferred route for many years to transport goods and energy from the Caspian region to global markets while bypassing Russia and Iran. Major oil and gas pipelines, along with the region’s main motorway and rail line, pass through it. Turkey, Azerbaijan and Turkmenistan are keen to examine the possibilities of increasing capacity in this trade route.

In addition to the Ganja Gap, there is potential for another transport corridor to boost regional trade and connectivity, called the Zangezur Corridor. As part of the November 2020 ceasefire agreement that ended the Second Karabakh War, Armenia pledged to “guarantee the security of transport connections” between Azerbaijan proper and its autonomous Nakhchivan region via Armenia’s Syunik province. Ultimately, the Zangezur Corridor would be another transit link connecting Turkey to the Caspian Sea and then on to Central Asia. Although it was likely this was discussed in Awaza, little progress has been made bringing it into operation.

The location of Awaza for last week’s meeting could not be more appropriate. The Caspian Sea is at the heart of the Europeans landmass, and anything at the heart of something is important. Already, billions of dollars have been invested to connect the region to the rest of the world.

The region is undergoing major geopolitical change. The same was true in the 1990s when the West worked with regional countries to build new pipelines and trade routes after the collapse of the Soviet Union. If Turkey, Azerbaijan, and Turkmenistan are supported by the EU and the US, this can be repeated — and now is the time.