INDOPACOM needs a joint force headquarters now, not when a crisis arrives. 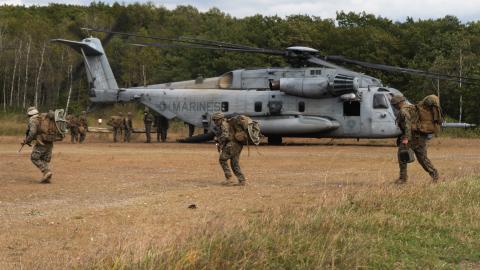 Caption
US Marines load a CH-53E Super Stallion conduct an air-insertion during Resolute Dragon 22 in Hokkaido, Japan, on October 6, 2022. (US Marine Corps Photo by Scott Aubuchon)

A parade of senior defense leaders argued over the last few months that China is on the precipice of invading Taiwan. They may be right. Fresh off his elevation to permanent leader during the recent Communist Party Congress, Xi Jinping may see the next few years as his best window to absorb Taiwan and cement his legacy. But the Pentagon is not acting like an assault on Taiwan is imminent, especially when it comes to command and control.

If conflict arises across the Taiwan Strait in the next year or two, US Indo-Pacific Command would have to scramble to assemble forces and defend allies in the region—the military equivalent of assembling a pick-up squad to face a well-prepared team. Although the U.S. military has extensive plans for responding to Chinese aggression, they assume adequate warning and availability of the right units at the right time. Both assumptions could be wrong given China’s ability to rapidly escalate and the overall erosion of US military readiness.

One way the Defense Department avoids going to war with pick-up teams is by establishing Joint Task Forces. These fill a gap left by the Goldwater-Nichols Act of 1986, which created the joint force but did not provide a way to integrate and manage units from different services in the field. One such task force was the US Pacific Fleet’s JTF-519, which for a decade developed and assessed responses for a potential conflict against China and considered ways of better dissuading Chinese aggression.

JTF-519 was disestablished in 2013 but the need for it remains. The new National Defense Strategy and Joint Warfighting Concept suggest the US military can deter or defeat Chinese aggression by making and enacting decisions faster and more effectively than opponents. Given the Pentagon’s time and fiscal constraints, this concept of expanded maneuver may also be the only way for US forces to succeed against a numerically superior PLA if war comes during the next few years.

But the processes and systems needed for decision-making advantage cannot be built on the fly.  New command-and-control centers require time and practice to become effective. And establishing a headquarters as tensions rise could accidentally escalate a confrontation by implying US and allied militaries are preparing to act preemptively.

JTF-519 was led by the Navy’s Pacific Fleet commander since a war with China was seen as primarily a maritime conflict. A decade later, the challenges and opportunities of joint warfighting are much greater. Recent wargames show US forces can counter the Chinese threat, but only by seamlessly combining actions across domains and services because the range and speed of action exceed what a single service component like US Pacific Fleet can execute.

Building command-and-control structures and kill chains spanning multiple domains will therefore demand sustained effort by operators in the only completely joint setting DoD has: the combatant commanders’ theaters. The difficulties experienced by DoD’s Joint All-Domain Command and Control initiative make this clear, having only modestly grown the force’s variety of kill chains after three years of experimentation.

Section 1046 of the Senate Armed Services Committee’s National Defense Authorization Act would help the Pentagon regain its multi-domain momentum. The provision would establish a joint force headquarters at Indo-Pacific Command to assess command and control architectures and kill chains needed for a future war with China through ongoing experiments, exercises, and demonstrations.

The location and reporting chain for the new headquarters are critical. DoD’s military services and support agencies are incentivized to further institutional equities in their experimentation. A generic joint force headquarters in Washington would not keep up with the increasing sophistication and specialization of threats worldwide or reflect China’s nature as DoD’s pacing challenge. Only Indo-Pacific Command is seized with the need to deter and potentially fight China in the near-term.

The new joint force headquarters would also provide a transition partner for some of the DoD’s highest-priority projects, which today lack a customer equipped to assess the product. For example, JADC2 is languishing because its top-down requirements and service-driven implementation will take decades to yield a highly interoperable force. A joint force headquarters focused on addressing the threat from China around Taiwan could focus JADC2 on the most advantageous kill chains for confrontations that could happen in the next year.

While its most important task would be preparing for combat, a standing joint force headquarters could also help the DoD dissuade aggression. The new defense strategy identifies as one of its three main lines of effort campaigning, which seeks over time to frustrate enemy efforts and produce allied advantages. Exercising command and control and demonstrating novel kill chains are part of campaigning, but the expertise and focus of a joint force headquarters would also be essential to developing and managing campaigns that orchestrate US operations, posture, and engagement to undermine Chinese plans and support US and allied capabilities.

Pentagon bureaucrats are sure to resist the idea of a distant joint force headquarters leading campaigns and driving priority efforts such as JADC2. They were right during the last 30 years of post-Cold War stability, when moving the nexus of capability development to the field would produce custom solutions ill-suited for other theaters. But the urgency of today’s China’s challenge—as described by the DoD’s own leaders—demands a different approach. Unless the US military organizes for campaigning and conflict in the Indo-Pacific today, it risks playing a pick-up game against a larger and better-prepared home team.

Read in Defense One.