Hudson Institute Welcomes Dick Emmet to Board of Trustees 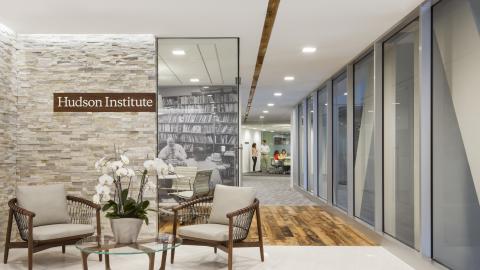 “Dick shares our commitment to make the world more secure, free, and prosperous.”

WASHINGTON—Hudson Institute announced today that Richard Emmet, an innovator in financial market trading, has joined its Board of Trustees.

Emmet is a former managing director at Jane Street Capital, a pioneering firm in proprietary trading and exchange traded funds. During Emmet’s two-decade tenure, the firm grew to over 2,000 employees, and traded more than $17 trillion worth of securities in 2020.

“The board is happy to welcome Dick and I have no doubt Hudson will benefit from his steady guidance and acumen forged during his extensive tenure as a leader in business and finance,” Sarah May Stern, the chairman of Hudson’s Board of Trustees, said.

Raised in Cleveland, Ohio, where he attended the University School, Emmet graduated from Cornell University in 1994 where he served as captain of the Cornell football team, president of the Delta Upsilon Fraternity, and a member of the Sphinx Society. He is a trustee of the university, a member of Cornell’s College of Arts and Sciences (A&S) Advisory Council, and a college campaign co-chair. He was previously a member of the A&S Ad Hoc Campaign Planning Committee.

After working as an assistant trader at BNP/Cooper Neff Inc. in Chicago, Illinois, from 1995 to 1996, Emmet joined the Susquehanna Investment Group, and became an equity index option trader and manager with the firm. In 2002, Emmet left Susquehanna to work with Jane Street Capital, a global proprietary trading firm based in New York City. In 2015, he became Jane Street’s global head of finance and served in this position for seven years before retiring from the firm in 2022.

Press queries may be referred to press@hudson.org.